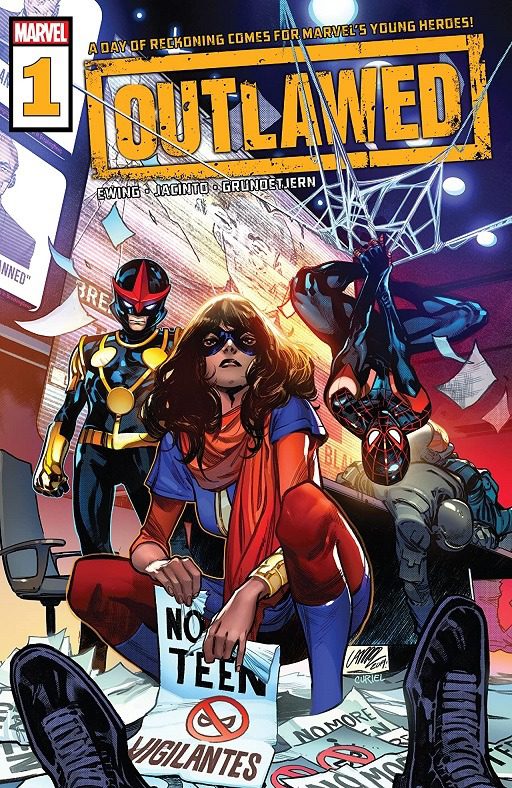 The Marvel universe has been down this road before. 2006’s “Civil War” event started with the young heroes from the New Warriors and led to the superhero registration act. Eve Ewing’s Outlawed takes a difference approach on the regulation of superheroes by focusing on teenage characters.

The Marvel Universe is in a different place than it was pre-Civil War and more importantly the real world is as well. The 24 hour news cycle already existed in 2006, but the instantaneous social media reactions were not present in the wake of Stamford incident. Congressional action in the Civil War came quickly, but not as fast as the reactionary hearings and passage of the Underage Superhero Welfare Act. The Congressional and legal events of Outlawed could easily have spanned multiple issues where politicians, superheroes, and the media debated the legislation. But that is not the story Ewing is telling. Her story is about what happens after the adults make the decisions.

Ewing is a scholar and writer, who’s area of study, race and education, positions her to speak knowledgeably and powerfully about the impact political decisions have on young people. America’s education system is filled with decisions adults and politicians have made with varying degrees of success and disaster. The implementation of the law quickly leads to a different kind of destruction. Families are torn apart. Teenage independence and discovery is clamped down with authoritarian might. The notion that the government knows what is best for children has echoed throughout education policy for decades. Like Civil War, Ewing has created the opportunity for social commentary through the lens of superheroes.

Ewing has already demonstrated a strong teenage voice within the pages of Ironheart. Outlawed starts with friendly dialogue, but as the chaos of battle unfolds the young heroes uncertainty is revealed. Emotions run hot. Confusion, anger, fear, and regret bounce from hero to hero. Individual right choices create wrong results. The artistic team of Jacinto and Grundetjern matches each of those emotions through the action and aftermath.

The aftermath itself feels minor, the event would have led to further lives lost without the actions of the Champions. But the actions of the Champions also led to this disaster. These shades of grey provide a complexity to the situation and the comic event that will allow Ewing and other writers to explore across multiple titles. The inclusion of Justice and Speedball from the now adult New Warriors provides a meaningful connection to the events of Civil War and the emphasis on adults creating mandates for young people.

Marvel has witnessed success over the past few years with younger and more diverse interpretations of classic heroes. Outlawed presents a society and power structure pushing back against that success. Eve L. Ewing has successfully set the stage for a tale that provides a voice to youth struggling to stand up for what is right and push back against the establishment.