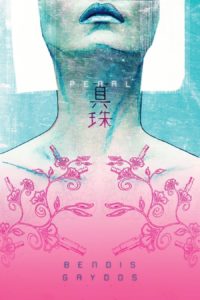 Brian Michael Bendis’s Jinxworld has made its way to DC Comics, and the first title to launch off the imprint is Pearl. A San Francisco tattoo artist named Pearl gets stuck in the middle of a war after she saves the life of a man she just met. Her skill with a gun attracts the attention of Mr. Mike, who is the head of one of the Yakuza clans.

The first issue starts off innocently enough with Pearl meeting a guy who seems familiar with with the mysterious spider tattoo she has on her arm. There is actually a lot of mystery within the story. Little tidbits of information dropped on readers which. as of right now, have no clue what they mean. Including Pearl’s connection to the Yakuza. Giving you just enough to keep you interested but not enough to know what’s going on is the bread and butter of a Brian Michael Bendis comic book. We are already seeing hints of that in his current Superman run, and it’s all the better because of it, but what Bendis does best is world build through supporting casts. He never wastes characters, and each has their own identity and charm. It’s something I wish more comic writers would pick up on rather than giving us two-dimensional side characters. Pearl has a lot to play off and I enjoyed even the more frivolous conversations she had because of it.

If I had to complain about something it would be the lack of the main objective. Thanks to the synopsis for the series, I have a good idea of what’s to come, but there wasn’t much of that in this issue. It’s in the preview but I’m still worried about mentioning what was missing due to spoilers. It did help hook me to this comic and I wonder if I’d be just as interested in reading issue #2 if I didn’t know about her tats and more about the guy she met. She’s interesting as a character, but the story beats that are missing from the issue are what makes this series unique.

Michael Gaydos artwork was in top form. The artwork was moody and expressive, you can’t help but stare at the pages a little longer than you would a normal comic. The coloring in particular really sets the tone for Pearl. One standout was the flashback scene with her father explaining to her that she needs a gun to protect herself now. It went the less is more route with the colors and it’s a great way to differentiate between current and past panels. I love the character design for Pearl too. Due to pages being so colorful, it’s hard to tell she’s albino, but she has a great look.

Not to spoil the surprise, but there is a little something Batman related attached to the end of this issue. It has an abrupt ending but the story itself and the explanation behind it was a joy to read.

The first issue of Pearl was surprisingly strong on character building, and light on story. It left it feeling a bit short, but it did its jump in getting me interested in each character. Brian Michael Bendis and Michael Gaydos are a super team all the way, and I’m down to read anything they work on. If you liked their run on Jessica Jones, then you’re in for a treat. It has that same type of vibe while giving us something fresh and new. Much like Rick being sucked in by that tattoo, I can’t help but want to learn more about this new leading lady.