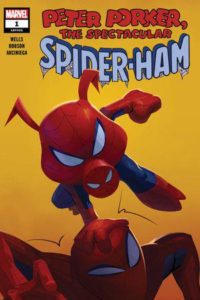 Peter Porker’s role in the Marvel Universe has expanded since crossovers in the Spider-verse comic limited series and the 2018 film Into the Spider-verse. That expanded role brings the character of Spider-Ham back to a self-titled series for the first time since the early 1980s. What started as a tongue & cheek parody is now a well-rounded humor comic with its’ tongue still pushed comfortably in its’ check.

The Spectacular Spider-Ham remains a parody comic that will make Marvel readers chuckle with puns and character parodies like Squawk-eye, DearDevil, Iron Mouse, Crocktor Strange, and Mooster Fantastic. Each of these parodies and more gets a few panels of comic relief and world-building jumping between vignettes that introduce the alternative universe. The plot never gets too complex but provides enough to set the stage for the coming story arc.

Have you seen this:
TMNT: The Last Ronin #1 (REVIEW)

Writer Zeb Wells knows the universe he is playing in and leans into the comedy. The humor in Spider-ham works well for Marvel fans and those that only have a passing awareness of the Marvel universe. The result is a humor comic that is approachable for any reader and rewarding for longtime fans. While the book never takes it too seriously, Wells crafts a story that feels right at home in the superhero genre. The humor lands well while playing into the self-awareness of a superhero comic.  What could have been played as a series of jokes and sight gags, Wells’ vignettes serve to strengthen the world around Peter Porker.

Zeb Wells’ experience writing for series like Robot Chicken creates a comedy awareness that balances fandom and playfulness. The snappy banter between characters works well on the page and would comfortably translate into a Spider-ham animated short. Wells’ writing is simultaneously laughter-inducing and groan-worthy. This duality results in an enjoyable read for all ages that honors the self-deprecating humor of classic Looney Tunes cartoons.

Vested Marvel fans will enjoy Zeb Wells’ take on classic characters and new fans will recognize Peter Porker’s wit from the animated movie. The Spectacular Spider-ham is a humorous, engaging, and smile-inducing comic that understands what it is and succeeds.