The Latest RPG coming to the Nintendo Switch

Last night, Nintendo and Game Freak dropped a gem on us, which was the amazing reveal of the new RPG Pokemon Games that are coming to the Nintendo Switch this Fall. Pokemon Let’s Go Pikachu! and Pokemon Let’s Go Eevee! This doesn’t really come as a surprise as there was rumors galore about those domains being registered, similar  to two years ago when Sun and Moon were registered in advance.  They fed us with a beautiful trailer that really highlights the graphics and features.

In case you missed it:

What is shown is a revisit to Kanto from the original Red and Blue series. The game will feature only the original 151 as far as we know, as you can see at the very end of the trailer there is a mystery gift with what is said to be a brand new Pokemon never before seen, according to the official Pokemon Twitter page. Now for the kids out there who are new or joined the Pokemon-fandom much later than ’98, let’s just say this is going to be “lit”. However for some of us ‘genwunners’ this feels like a big let down.  Let me explain. This is the second remake in this region and they pretty much badgered us with Kanto Pokemon in the Kalos region.  Pokemon Go was incredibly popular when it first relased two summers ago and for the longest time, also originally featured only the original 150. It was insane and unprecedented to see so many people waltz back into the franchise, and although, it is still one of the popular mobile games out there today, fans grew fatigue after a couple of months. Fans demanded new features who come to play, such as any of the other 6 generations of Pokemon. A second generation was not implemented until a full year later.  There was also Fire Red and Leaf Green for the GBA, which us “genwunners” were alive to remember very well. So my point is that this is just way too much Generation 1. As much as I’m a sucker for nostalgia, and trust me, Gengar is my favorite Pokemon after all, but of all the 800+ Pokemon available, I think the original 150 are overplayed. Back to the article at hand.

The game looks absolutely stunning and is very similar to the 3DS games we have come to know and love. It just has way better graphics, presumably 1080 at 60 fps, 720 mobile which is going to be one of the coolest things every to see a Pokemon RPG in. 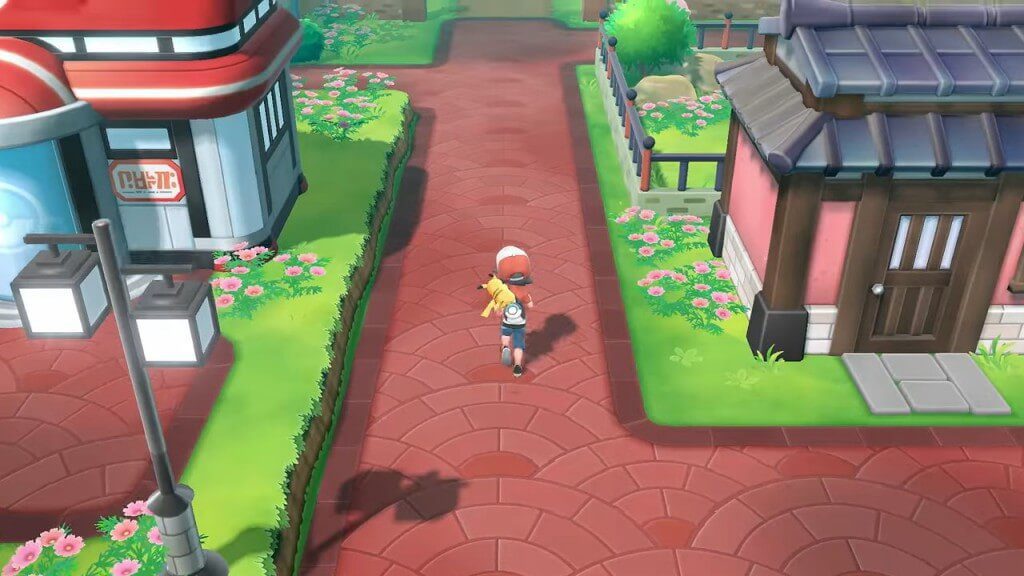 The trailer shows that you hold a Joy-Con with whichever hand you want and motion like you are tossing a real ball at the screen.  My guess is that you can curve the ball as well since they are pretty much matching the Pokémon Go features. You move the character with the analog stick and interact with the buttons. We can imply that you don’t battle the Pokémon before catching them which is a huge choke on GameFreak’s part.

You get a choice of picking a boy or a girl (insert Professor Oak joke).  As mentioned, the overworld and battle areas are just like the 3DS games but with beefed graphics.  You get to catch Pokémon exactly as you do in the mobile game Pokémon Go with no battle sequence.  Not yet sure how the EXP or leveling system works. I’m hoping the CP introduced in Pokémon go doesn’t come into play but based on a snippet in the trailer it might after all. In handheld mode you use the gyro system and by pressing a button.  Coming back is the ability to ride Pokémon instead of raising an HM slave. Unsure of which Pokémon will be used to get through puzzles at the moment.  It looks to be a remake of Pokémon Yellow as the trailer shows the exact locations of the older games and trainers are in the same spot. Works the same way, you meet eye contact with a trainer and begin a battle. Thank goodness or a lot of fans would riot. 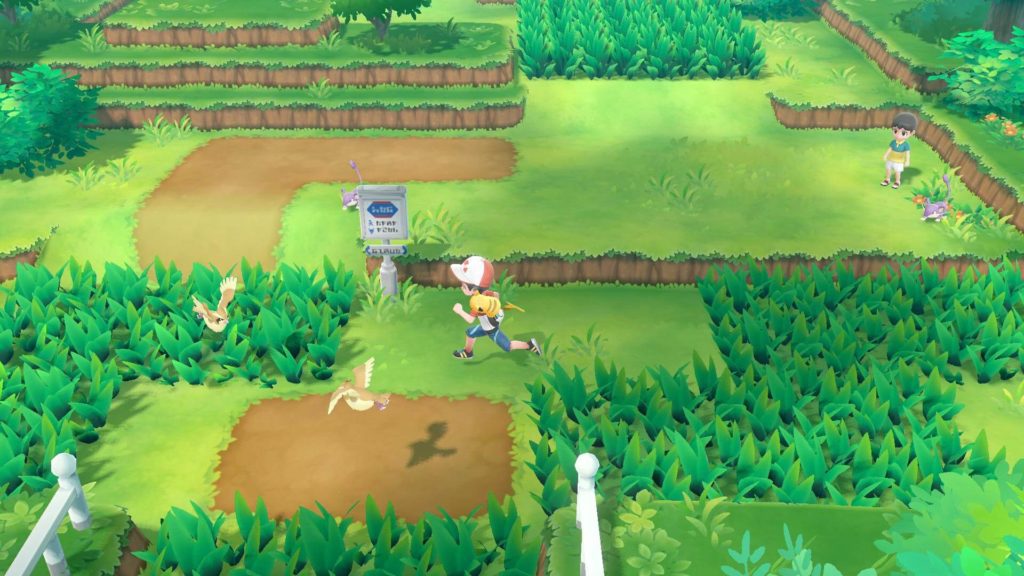 New features added to this game compared to previous games which include the new co-op mode. My significant other is going to love this, now she can help me hunt for those sweet, sweet shiny Pokémon. The added trainer can run with you in the overworld and assist in catching ‘mons. Having two trainers helps the success rate of catching. 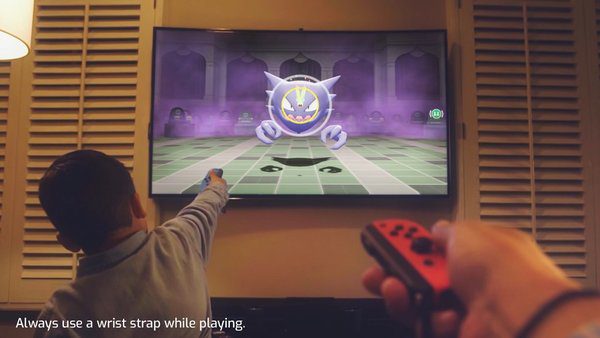 The ability to have a Pokémon follow you, originally featured in Pokémon Yellow, is back by popular demand and looks cooler than ever. The mascot Pokemon of the respected games can sit on your shoulder or head and looks super adorable. This time, the Pokemon seem to be seen in the grass and you walk up to them to engage in the catching sequence which is new and pretty neat. Not yet sure if that is the only way to encounter the ‘mons.  Another cool feature is that you can dress up Pikachu or Eevee, looks to be the only ones, and even use them in battle with the gear.

The Pokeball control, called the Pokeball Plus, will be used in place of a controller that lets catch and walk around with a Pokémon in the real world much like the classic PokeWalker from the HGSS/SS days.  This things looks great and even glows like a real Pokeball. It can be used as a Pokémon Go device as well.

The new games tie into Pokémon Go in a huge way by transferring them from game to game via a Park which looks like a PokeRanch back on the Wii. You catch an original Pokémon and can share it to the Switch vice versa. You can even send to other trainers locally. Shouldn’t be too hard to catch them all since there is only 151! However currently there is going to be no online according to the Pokemon CEO.  Which leads to my next point.

They ruined Pokémon! Okay, not really but hear me out. I understand the direction they are going for releasing this game.  But what about the competitive gamers? As it sits, this is a super casual game geared towards new and casual players to ease them into the franchise. With the release of Pokémon Go, thousands of new players and newcomers to Pokemon downloaded and played. It’s one of the largest mobile games in existence. From people who once played and were looking to get back in to completely new players, Pokemon Go really added a huge fan base to the community. This game looks to be a time filler to the more experience competitive trainers that play the meta game which looks to drop next year.

2019 core RPG (untitled) is set to be “in the style of X and Y and Sun and Moon”. This should appease competitive players, with Let’s Go! aimed at a broad audience, “a core RPG for everyone”.

As the tweet demonstrates, this game is going to bridge the gap between the core game and Pokémon Go. The game will give casual trainers a chance to experience battling and traversing through a region in the Pokémon World.   It could be very overwhelming for casuals and new comers to get into building even a decent competitive team. There are so many factors that go into building a legit team that they barely started addressing in Sun and Moon. IV’s, EV’s, breeding for the perfect offspring, and natures are all very important factors into being competitive. With that being said, I’m not sure even any of those things will be included in the new games but who knows. I, myself, got into the the competitive scene in Gen 5 and have since perfected the craft. I currently run a wonderfully balanced, perfectly bred team for my Ultra Sun game. It takes a lot of time but it used to be much more rigorous back in the day.  The competitive scene looks to be dead since there is going to be no online feature and only 150 ‘mons to choose. Safe to say that there isn’t going to be a lot of breeding or crazy strategies to defeat trainers although the original game was very difficult as there was no natures or anything mentioned, heck there wasn’t even any held items.

Despite the game being geared more to casuals, I am still very excited to be able to play an RPG game on the Nintendo Switch. The return of popular features and awesome new features being added, this will be a really good game for all fans. I’m excited to hear more news and features about Let’s Go during this year’s E3. That’s all we know as of now but stay tuned as there is much more to come.

Whether you are excited the upcoming game or disappointed its not one of the core RPG games we have all grown to love, let us know your comments below.

One thing is for sure, it looks like there will be plenty of Pokemon in the future, this year and next.

With #PokemonQuest and #PokemonLetsGo, there are so many new ways to explore the world of Pokémon! Trainers can look forward to even more with an all-new core series Pokémon RPG title in development for the second half of 2019! pic.twitter.com/d5uiIpenMI