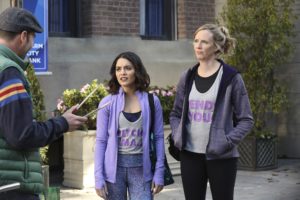 Apparently cities get ranked in the world of DC Comics and Charm City is not exactly high up in the roster. With the announcement that Crimson Fox is leaving Charm City for the higher calling or Metropolis (Adjacent), the team at Wayne Security speculate on who could take her place as the city’s champion. As Emily worries about whether the lack of a superhero will embolden criminals, Jackie reminds them of some creepers already in their midst (All ladies need to stay away from Creepy Tony the Hot Dog Man). It looks like Emily has finally found a way to become friends with Jackie by having them both take a self-defense class and Van gathers the entire floor for an emergency meeting to discuss a serious violation: someone has used his personal bathroom. 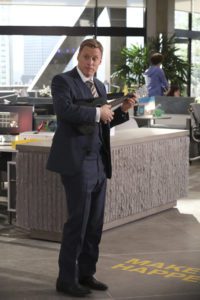 As Van calls for the guilty party to step forward and take their punishment, there is a genuinely funny moment for Alan Tudyk to improv and it is hilarious when he confronts the elderly woman in the office with “Turder She Wrote” and “Law & Order: IBS (Irritable Bowel Syndrome)”. After Emily is forced to go to her class alone after being ditched by Jackie, she isn’t happy about the fact that she finds her sitting in her car, which she is using as an Uber to pick up extra money. Jackie tells Emily why she’s doing side work and threatens her to not “Emily” this by trying to help. Of course she doesn’t listen and the rest of the team gets enlisted to help Jackie’s daughter get to Six Flags: Metropolis.

Van continues to try and find out who used his personal bathroom and narrows it down to Teddy, Ron and Wendy, who he confronts in his office with a flurry of unintended poop puns which would have been funnier if no one brought up the fact that he was doing them. As a means of getting them to talk, he moves their work stations into Conference Room B. A move that doesn’t get him the results he wants since they basically just fix the lights and chairs. Emily decides to go to Jackie’s school and it does not work out well for her and Jackie’s friendship. 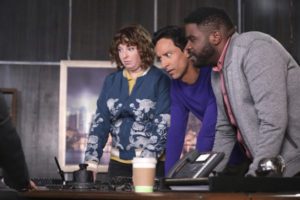 The final act of the episode is a little middling as Jackie ends up in the hospital and Emily is conveniently, her emergency contact. As the two talk out their issues, one can only wonder why on Earth would these two ever be friends. The episode ends in a pretty cliché manner with the resolution for each storyline that is satisfactory, but not particularly funny. Van’s been on a wild goose chase the entire episode. Emily and Jackie come to an understanding. Ron, Teddy and Wendy’s friendship gets stronger. The lack of overt DC Comics references is refreshing in this episode, but it still falls into some muddy sitcom tropes that they need to transcend in order to move ahead.