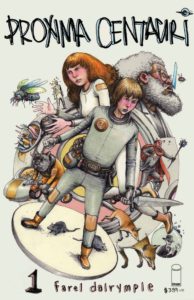 Written and Drawn by: Farel Dalrymple

One of the things I admire is an artist willing to take risks. Farel Dalrymple delivers with aplomb. In an unusual move, Dalrymple has taken the entire process into his own hands, and the result is a cohesive, effective, highly stylized comic that does not look like anything else Image Comics is putting out right now.

The art, reminiscent of indie zines and those photocopied college comics passed out in the halls after lecture halls, is sketchy and delightful. The story follows Sherwood, described as a teenage magician,  who is caught in a space station that has been thrown for a time-space loop. He and the rest of the characters are trapped in this strange, off-kilter, gravity-defying world, and all Sherwood wants is to get home to earth to find his brother. It’s an exploration of art and style, and the story is secondary to the presentation, which feels fresher and more interesting than the story anyway.

This world is strange, the art bizarre, and even though it feels as if you are falling into a strange new world, you are never allowed to descend so fast that you cannot follow Sherwood through the story. He becomes the beacon that guides you through the vibrant art, strange world, and wild dimensions. The art is rendered in light pastels and colored pencils, evocative and present. All of it is seamless, it makes so much sense for this story to have this style. 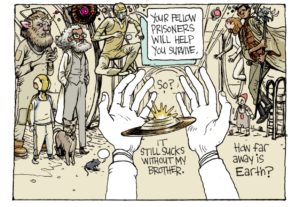 The story can be hard to follow if you get caught up in trying to ‘understand’ what is being shown to you, but once you simply read the book, letting the story and art catch up to each other, it becomes cohesive and vibrant, psychedelic and magical, strange and familiar at the same time. This is meant to be a prequel to the full run, so perhaps this Legion-like vision of Sherwood in space will change, but Dalrymple has created a world I’m excited to explore, and a story I want to read.