PSYCHOS – They’re Back For Bloody Revenge 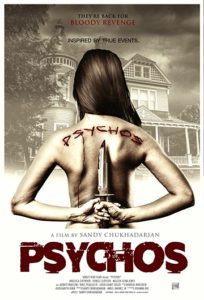 When three young women receive shocking videos anonymously, a nightmare is reawakened that ignites a thirst for bloody vengeance. They embark on a journey to locate the house, their sadistic captor and to discover the truth behind those locked doors. But, the most shocking revelation of this chilling tale is the identities of the victims. This film is based loosely on the shocking true story that came out of Cleveland, Ohio. Where three women were held as prisoners by a man for eleven years. Until finally they made their escape.