PUCK HCKY (www.puckhcky.com) - the custom hockey apparel brand dominating music merchandise - have recently partnered with an exciting mix of artists, such as Snoop Dogg(who recently sported his PUCK HCKY brand hat on Jimmy Kimmel Live), Testament and Overkill. PUCK HCKY are thrilled to expand further with the joining of thrash legends Exodus and heavy metal newcomers Gruesome. In addition, PUCK HCKY plans to add partnerships with artists such as Meshuggah, Darkest Hour, Toothgrinder, Less Than Jake and others in the coming months, as well as music labels and other brands. 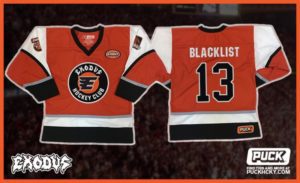 The Exodus “Bonded by Puck” collection is designed around the band’s favorite sports teams. In the hockey world, Exodus loves the Calgary Flames and Philadelphia Flyers. Fittingly, the Bonded By Blood jersey is classic Flames style, and the Fabulous Disaster jerseys (two colorways) have that Philly spirit. Exodus also tasked PUCK HCKY with crossing hockey over with their other favorite sports. The Piranha jersey brings in a little football, as it’s done up in 49ers colors, and The Warrior jersey gives props to reigning champs of the NBA, the Golden State Warriors. Fun fact: The Warrior is also the same jersey worn by the Hanson Brothers in Slapshot! All of the jerseys, as well as the Toxic Waltz flannels in this collection sport a patch based on their legendary song of the same name, if you look closely, you’ll find two players ready to “waltz it up”. Each jersey and select flannels also feature the “Bonded by Puck” patch which commemorates the collaboration and pays tribute to the San Francisco Giants. 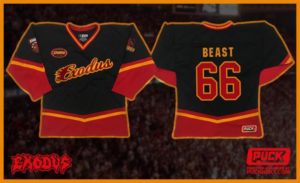 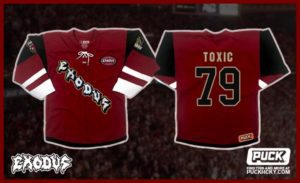 Matt Marini, CEO of PUCK HCKY says: “Well it certainly doesn’t get any more legendary than adding the mighty Exodus to the PUCK HCKY roster! Everyone knows that you can’t have any discussion about Bay Area thrash without starting with Exodus. The guys are very proud of their home and we worked hard to reflect that in the designs. The “Bonded by Puck” collection is here! We are also super-pumped to add a newer, but no less heavy band in Gruesome! We totally dig that Gruesome pays tribute to old-school death metal with their look and sound. The “Skate Savage Play Savage” collection is also here!”
Exodus guitarist Gary Holt adds: “Hella stoked to be collaborating with PUCK HCKY. This is what Paul Baloff is wearing right now while he is beating posers with his hockey stick mic stand in Hell.” 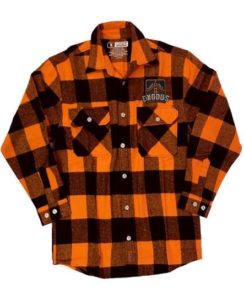 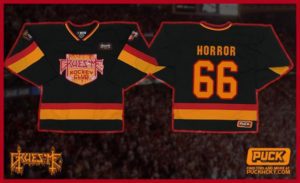 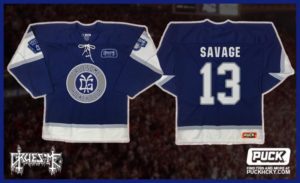