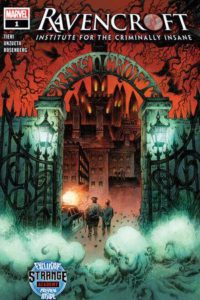 The new staff at Ravencroft have their own agendas and secret forces they report to. Unfortunately, they aren’t the only ones.

Misty Knight has been brought on as a consultant at Ravencroft and she jumps at the chance to spy on the institute for the criminally insane for the group she works for. Even though they are pleased with her work, they have misgivings about John Jameson coming on as a security consultant and Kingpin’s interest in the facility.

To make matters worse, Misty and Jameson find themselves working alongside Norman Osborn who has also been appointed by the Mayor. There is dark energy at the newly remodeled and state of the art facility and the dark corners are hiding unknown secrets. As Misty and John join Norman for a meeting of the staff, they find that the inmates are truly running the place in more ways than one.

Frank Tieri imbues this story with a great mixture of drama and psychological thriller. It’s a story where everyone has secrets and those secrets drive their actions. Having Misty Knight in the center of the action gives the plot some interesting places to go with an engaging character who is both parts of and outside the drama. I like the introduction of Osborn in this story and the final reveal opens the possibility of some really compelling storytelling to come.

Angel Unzueta brings the story to life with some great art that focuses on the darkness of the facility and its inhabitants. There are some great shots throughout that make you look in the corners of panels to catch something you might have missed.