I really, really like this team-up. The tension between Red Hood and Batwoman feels very natural, probably because they have no reason to like each other. Something about fighting alongside someone out of necessity, and not by choice, suits Red Hood very well.

Batwoman is trying to make amends the entire issue. That’s not a surprise at all, given what transpired when Bizarro and Artemis were still around. However, I don’t think she has delusions that they’ll ever be friends. Same goes for Red Hood, though, he’s not trying to make up. He just wants to get things done.

Now, I got the sense they were beginning to warm up to one another by the end of Red Hood: Outlaw #29. I hope Scott Lobdell doesn’t turn these two into best buddies. I know Jason Todd has a thing for redheads, but these two complement each other so well because they aren’t friends.

For instance, I can’t imagine saying, “Yet if you stay, I’m going to tear your lungs out through your nose,” to a friend. Or maybe that’s exactly who you can say something like that to?

Anyways, it’s a team-up we didn’t ask for, or think we necessarily needed, but it looks promising so far. But things could get screwed up very easily.

Though, it’s kind of weird to think Red Hood ripping off a zombie giant’s heads with a chain classifies as “toning things down.”

The action was non-stop too, hitting you with a big one against the clones derived from Solomon Grundy’s DNA—which I called after last issue, without doing any of the detective work Kate Kane did.

Along with that team-up and getting an idea of where things are heading next, FBI Special Agent Melissa Mitchell made her return. She’s a bit behind Red Hood, but right where he wants her to be. Wingman is shadowing her, as well. Still not sure what he’s looking to do, since we don’t exactly know who he is.

First, classic walk-while-the-building-explodes-five-feet-behind-you from Red Hood. As cheesy as those are, I always love them.

Second, the pie lady was both a robot and in charge of Underlife in three states. Did not expect that. More importantly, she mentions how she’s heavily protected. Why does anyone think a masked vigilante cares whether or not you’re protected? If you’re dealing with someone who runs around in a mask playing hero, there’s a good chance they don’t care about you being protected. 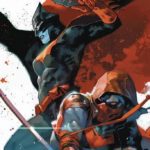