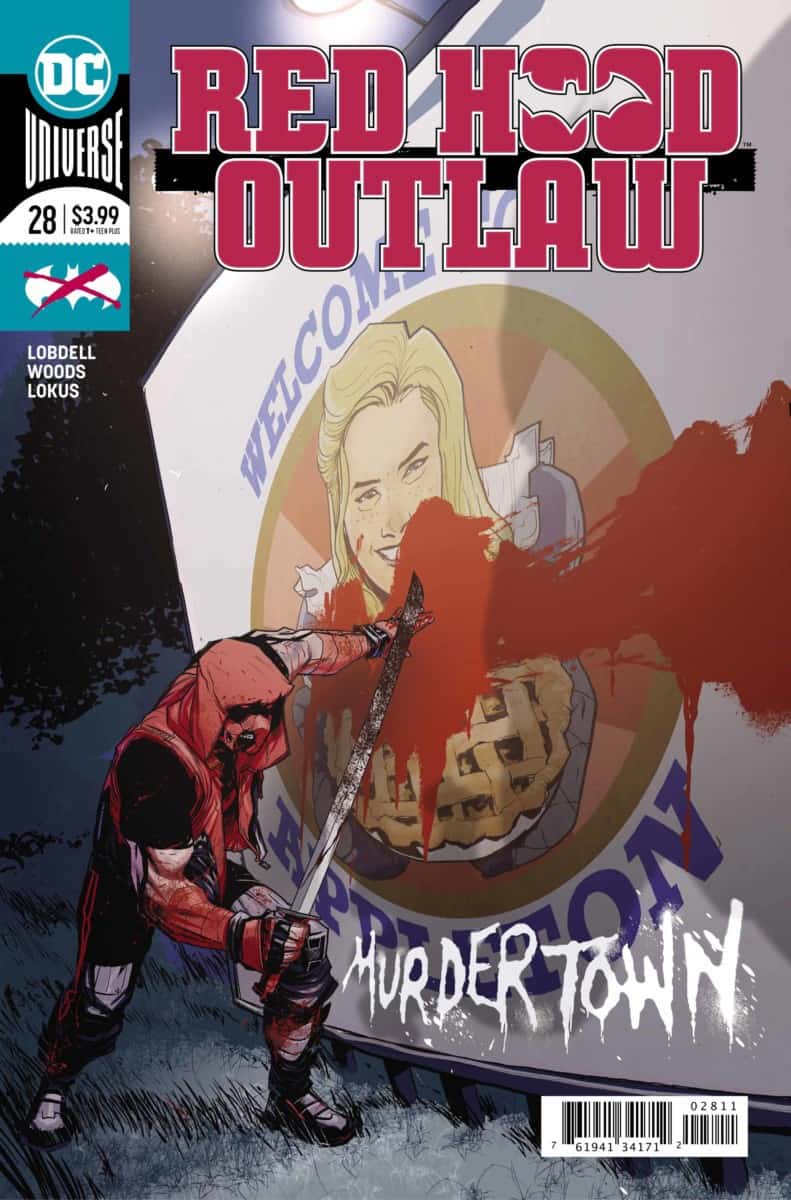 It all happened so fast, too. Scott Lobdell and Pete Woods set the tone five pages into the story. I thought it would take the whole issue for us to get a real payoff as to what’s going on in the town. Instead of being knocked out in an all-out brawl with the town Jason Todd could’ve been put to sleep by a sedative in the apple pie he ate. Nope. He took on the entire town, knocked out grandma and grandpa and got smashed in the face with a sledgehammer.

And somehow he wakes up in his new Red Hoot getup. That was a little odd. Though I’m glad Woods got him out of his street clothes. I want him in the new outfit as much as possible — kind of like when he rocked his old outfit.

As he wakes up, Jason realizes he’s hanging on a cross, like he’s about to be crucified. He’s also got a green, Solomon Grundy-looking monster ready to smash him to bits.

Of course, Red Hood finds his way out of it, and he IMPALES the monster. Almost a full page of Jason driving the cross turned stake into the back of the beast through his chest. One of my favorites panels from Woods so far.

However, that also led to some of the grossest art I’ve seen in a while because the stake didn’t finish the job. Red Hood as to rip it out of the monster and it was BRUTAL. Even Jason said, “That was a lot grosser than I was planning.”

Now, I don’t know if these giant zombie monsters (robots?) will turn out to be strong fighters, but this is a pretty big kill for Red Hood. It definitely looked a bit tougher than gangsters and degenerates that he typically pounds on.

Also looks like we have a Red Hood and Batwoman team-up on our hands next issue. Can’t imagine that’ll go smoothly — which is not at all a bad thing for readers.

Hopefully, we’re in store for more back-and-forth like this:

Red Hood — And you’re not a long way at all from having your ass kicked.

We’ve also got Wingman coming our way soon. Will we find out who’s taken on the title that Jason has dawned in the past?

Last thing, both Woods’s cover and Yasmine Putri’s variant cover were SO SICK. Putri’s has me wondering something, too. Any shot we could get some more crowbar? Haven’t seen it since Red Hood: Outlaw 26.