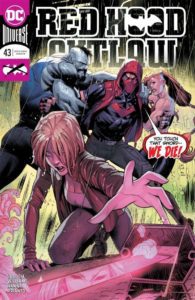 Other than the ending, there wasn’t really much to like about Red Hood: Outlaw #43.

It’s great to see the Dark Trinity back in action, but Christopher Williams’ interpretation of the characters leaves a lot to be desired. It’s their faces more than anything else. Artemis and Red Hood look like they’ve aged by 10-12 years out of nowhere. Something about Jason’s mask seems off, too but that may just be part of the same problem.

Their physiques are fine, same goes for the action. But the lack of consistency when it comes to Red Hood’s face from artist to artist is frustrating — and that part of the problem is on DC, not Williams.

What wasn’t disappointing in the slightest: Dan Mora’s cover and Marc Deering’s variant.

So this was a miss-mash of, essentially, four teaser trailers.

The first possible story with Suzie Su seems OK at best. This better not be a story just about her and her sisters though. At least one of the outlaws needs to be involved for that to be interesting.

The same can be said about the Ma Gunn story.

But, bringing back The Untitled isn’t a bad move. Again, not a fan of their look, but that’s not as important as the issues with Red Hood and Artemis.

One other quick aside, and it’s regarding the art again. The All-Blades look more like some sort of fireworks rather than mystical, magic swords.

The last story introduced, in the final pages of Red Hood: Outlaw #43, is by far the most promising one. Essence is a badass character, and, naturally, she could tie into The Untitled storyline.

Have you seen this:
TLDR Event: DC Future State

There’s promise, but between the recent issues and the way Red Hood: Outlaw #43 went, it’s hard to get your hopes up — even though Lobdell gives you reasons to be excited.