“OH MY GOD RED SPARROW IS A BLACK WIDOW RIP OFF!!! JUST WATCH THAT 2 MINUTE TRAILER!!! ITS ALL THERE!!!” – Most people who haven’t seen the movie. Probably.

I didn’t know much about the movie before I saw the trailer. But, judging from the reactions on twitter it was clear that people were quite angry that Red Sparrow had somehow flew in, stole the character and blatantly copycatted her story. Because in a two-minute trailer watching scenes of a Russian operative with a ballet backstory seems to be the same as the popular Avenger.

Well, let me stop you right there. Because that’s where the similarities start and end. Red Sparrow stars Jennifer Lawrence, as Dominika Egorova. A young ballet dancer who wants nothing more than to become a great dancer and take care of her mother. But, sadly, that isn’t to be after an awful injury forces her out indefinitely. It’s after this traumatic event that she discovers what truly led to her injury and she retaliates. Thus, leading to her life becoming a never-ending tailspin. 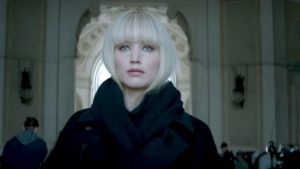 Along for Dominika’s crazy adventure is Nate Nash, played by Joel Edgerton. A CIA agent who is originally taken off his post because of a late night meet up gone wrong with a mole who’s working within the Russian government.

That’s quite the mouthful, right? Just wait, it gets better.

I’m not going to give anything away because the movie does a fantastic job keeping the audience engaged and keeps you guessing until the very end.

Director Francis Lawrence does a fantastic job of bookending Dominika’s story and tying up loose ends. Though we are constantly meeting characters whose motives are questionable our main character never falters or loses her conviction. However, much like the other shady like characters we often question what side Dominika is on. Is she truly fighting for the Russian government or has she been turned by her “new friend” Nate? Will she stay loyal despite the circumstances in which she’s now a Sparrow or will she retreat to her old life when her mission is complete? Will the government even allow her to go back to a normal life? Also, what role do Nate and his Russian mole play in this whole thing? 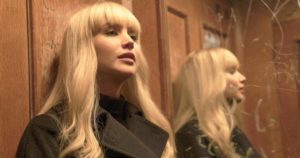 “PLEASE SIR, MAY I HAVE ANOTHER!”

This is a fantastic spy thriller that packs a ton of punch. It’s intense, brutal at times and in your face. The chemistry between Lawrence and Edgerton works and help push their story forward. The supporting cast is equally great, with Matthias Schoenaerts as Dominika’s shady uncle, Mary-Louise Parker as a shady U.S. government official (Do you notice a theme here?), Joely Richardson as Dominika’s Mom and Jeremy Irons as a Russian general who doesn’t seem to trust the Red Sparrow.

So, when you walk into the theater be sure to check your Black Widow comparisons at the door. There isn’t one. This is a good old’ fashion spy thriller that will hold your attention till the final frame.