The world lost Bobby “The Brain” Heenan at the age of 73 on September 17, 2017. The Brain was a consummate presence in pro-wrestling for many decades and served as a wrestler, manager and color commentator. Heenan was nicknamed “The Weasel” and lived up to the moniker. Even when he played a villain, the crowds loved to hate him. I watched him in elementary and middle school all through the days of the Monday Night Wars when he served honorably as WCW’s best commentator.

To honor his memory, I jotted down my top moments in the Brain’s career:

For years the wrestling business in the USA was sharply divided along North and South lines. The McMahons controlled the North with their champion “Hulk Hogan” and the Crockets of the South had Ric Flair. When the southern company, WCW, fell under new, and highly incompetent, management in the early 90’s, Ric Flair headed North to test his fortunes. Bobby Heenan was the man chosen to introduce Ric Flair with the actual WCW title belt on WWF television! Heenan’s promo work with Flair was golden, but I personally loved the improvised lines he shouted in the backstage area at the production crew in preparation for the REAL world champion’s arrival.

The Weasel character may have been a coward, but no one can accuse Heenan of being an underachiever. Wrestlemania 3 is still remembered as one of the quintessential events in wrestling history and many have argued that the non-wrestling Heenan was its most memorable star. In one night, Heenan managed three matches and provided color commentary. He managed the great Andre the Giant in his epic battle where he was body slammed by Hulk Hogan. As the crowd pelted Andre and Heenan with garbage on the way to the ring I couldn’t help but think that the angle would not have gained the heat it did without Heenan by the giant’s side. 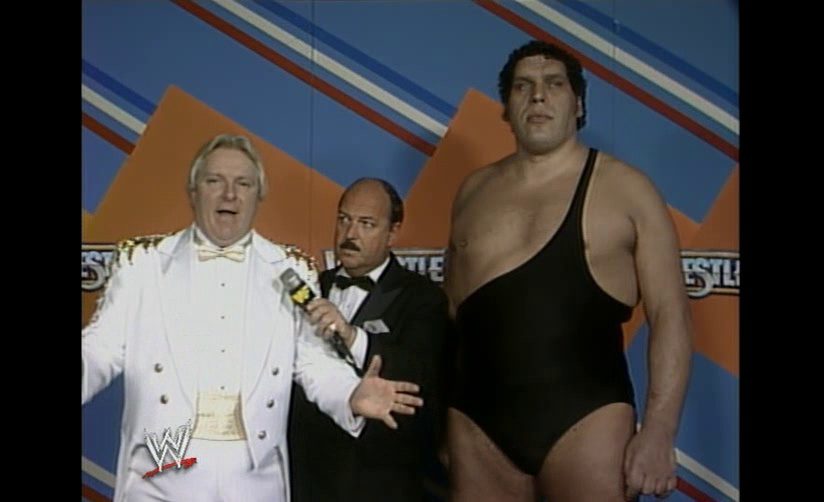 The beginning of Monday Night RAW would launch a new era in sports entertainment when it went head to head against WCW’s flagship show Monday Nitro. When RAW began, Heenan was the man on the scene. Many of his recorded promos played during the show itself, including one announcing the appearance of “The Narcissus” AKA Lex Luger. But during the show’s action, Heenan had recurring segments where he was trying to get into the building but kept getting barred at the door. It only served to highlight how big of a deal RAW would become over the decades when they wouldn’t allow someone as famous as the Weasel inside. The birth of Monday Night RAW was an integral step in the coast-to-coast popularity of pro-wrestling after the territorial days had faded and the war between promotions began. Heenan would later jump ship to WCW where he was front and center for another event… 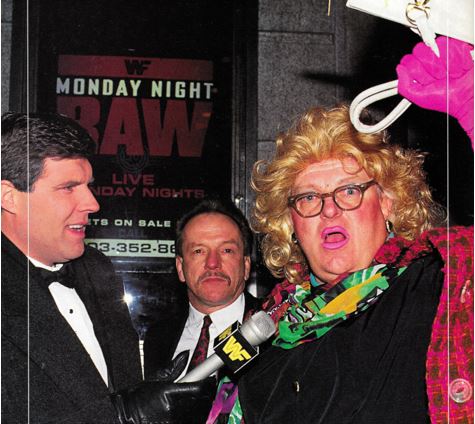 Wrestling changed the day that Hulk Hogan dropped the big leg across the larynx of Macho Man Randy Savage. It was unthinkable. He had betrayed all the little Hulksters and turned to the dark side of the New World Order. When Hulk first walked down the aisle for the infamous match at Bash at the Beach 1996, the crowd cheered him on. Heenan shouted into the mic, “Yeah but WHOSE side is he on!?” Many have accused Heenan of ruining the surprise by suggesting Hulk might not have been there to fight for what’s right. Heenan’s broadcasting partner, Tony Schiavone, defended the decision by saying the line made sense for only the Brain to say. Heenan’s character had hated Hogan for years, so it would’ve been strange if Heenan had NOT voiced his suspicions. The Hulk’s heel turn was a final justification that the Brain was right about him all along. 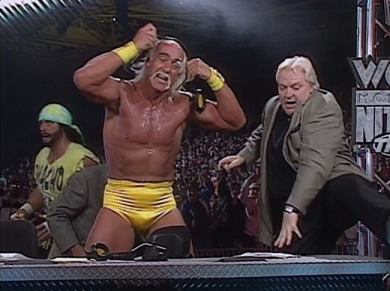 Heenan was called the “Weasel” for his shrewd intelligence and willingness to think outside the box (a.k.a cheating) to win. The name “Weasel” stuck and he did everything he could to live up to it. He even went as far as to create the Weasel Suit match. It was born when Heenan wrestled Greg Gagne. The loser of the match would be the first man dressed in the suit by his opponent. The final Weasel suit match was against none other than the Ultimate Warrior in 1988. The powerful, face-painted, man from Parts Unknown sent Heenan to dream street. The Brain woke up to find himself inside the hairy suit, much to the thrill of the fans. Heenan then retired the gimmick and stated on The Self-Destruction of the Ultimate Warrior DVD that he had no idea what happened to his trademark weasel costume after that match.

Have you seen this:
INVINCIBLE Season 1, Episodes 1-3 (Review) 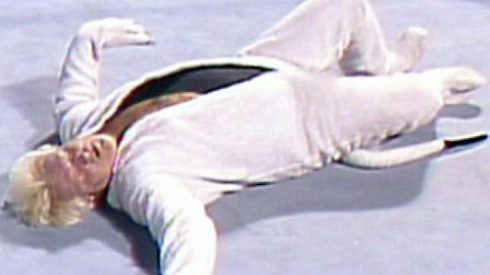 I know for years there will be constant debates between Heenan and Paul Heyman for the title of greatest manager in pro-wrestling history. While many will always remember Heenan as a great manager, I will always hold him in esteem as the greatest color commentator in the history of sports entertainment. His times with his real-life best friend, Gorilla Monsoon, on WWF programming made even the dullest matches entertaining with his unscripted nature. I fell into wrestling during the heyday of WCW Monday Nitro and positively HATED Heenan. That was good. It meant he was doing his job. Everyone was supposed to hate the cocky announcer as he spouted off against the humanoids and the ham-and-eggers facing off in the ring. I subscribed to WCW Magazine and every year I was shocked when Heenan won the best commentator award. I was such an easy mark, I didn’t know how well the Brain was working me. And that’s the sign of brilliance. 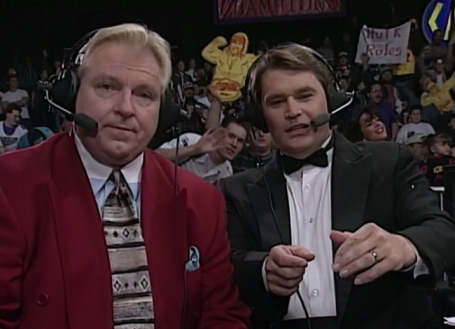 For reasons unknown, WCW chose to replace Heenan on Nitro’s commentary team with Mark Madden. A few months later, WCW went out of business. Heenan, however, made an appearance in 2001 to call his first WWF match in nearly a decade at Wrestlemania. Alongside Mean Gene Okerlund, he performed his usual quirky color commentary for a match that involved 19 other WWF alumni who had been famous for performing larger than life gimmicks and characters. Jim Ross described it best when he introduced Heenan as a better gimmick. It was the last match Heenan would call for the WWF(E) before he would be inducted into the Hall of Fame in 2004.

I went back to re-watch his induction speech after I learned about his death. It made my eyes misty and brought a smile to my face at the same time. Bobby Heenan had a way of doing that. There will never be another character like the Brain and the world is darker without him in it. I wish the best to his family and thank them for sharing him with us. Heenan has left behind a proud legacy as a constant entertainer. No man may choose the time or method of his death, but the manner in which he lived his life made us all happy to have known him.

What Bobby Heenan moments did I miss? Sound off to me @JSandlinWriter on twitter. Check out my podcast #WhoWouldWin here on the GWW Radio network: https://thegww.com/category/podcasts/whowouldwin/