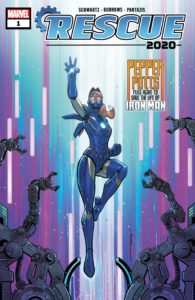 People like myself, who have had much of their comic exposure due to the MCU, have seen Pepper Potts become the superhero Rescue once in Avengers Endgame. I thought it would be just a one-time occurrence however the comics begged to differ. This week, along with Iron Man 2020 #3, is Ms. Potts in the blue armor on one very important mission!

With a story following directly after the events of this week’s other Iron Man comic, Pepper is out in the world to try to track down bits of Tony Stark (literally) to be able to bring him back from death. On a trip out to London to see Tony’s biological mother, Rescue sees just a minor instance of the Robot Revolution started by Mark One. While that was a fairly easy task to deal with, a much larger threat rears its head. Does Rescue have what it takes to deal with such an evil?

The issue itself was visually popping with the extensive use of bold colors against the hard outlines. It made for a very eye-catching experience that brought some of the action out of the pages. The dialog and story overall were pretty good except that it felt that it was a little long in places, especially with Tony’s mom. However, the action did help cut into that. All in all, a great pickup for fans of Pepper and Iron Man. Looking forward to seeing issue 2 in a few weeks and the continuation of the Iron Man 2020 storyline.