Zombies beware, the Raccoon City Police Department is gearing up for another mission.

The HD versions of Resident Evil: Revelations boast an increased frame rate, more environmental detail, refined creature movement, and a resolution adjustment to 1080p. Returning is the fan favorite Raid Mode that will now feature new weapons and an added new area The Ghost Ship: Chaos. As of now the price has not been announced however the soon to be released PlayStation and Xbox ports will begin at $19.99.

Longtime fans of Resident Evil will remember the initial release of Revelations back in 2012 as one of the earliest carts on Nintendo’s 3DS handheld. It remained a 3DS exclusive until 2013 when Capcom brought the well-reviewed chapter to the PS3, Wii U, PC and Xbox 360. A port to the Switch is a perfect move for both the publisher and the console as Nintendo’s latest product could clearly use mature rated titles to pull in stubborn adult gamers and Capcom is riding the wave of the Resident Evil resurgence following the excellent Resident Evil 7: Biohazard.

The critically acclaimed survival horror title takes players back to the events that took place between Resident Evil 4 and Resident Evil 5. Jill Valentine and Chris Redfield return from previous chapters and with them are additional BSAA agents Parker Luciani and Jessica Sherawat. As the team boards an abandoned cruise ship, the ‘Queen Zenobia’, horrors lurk around every corner and death is just an empty ammo clip away. 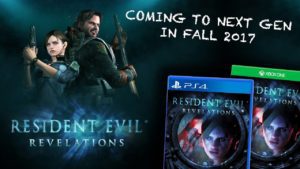 Did you play Resident Evil: Revelations on the 3DS? What is your favorite Resident Evil game? Comment below and stay tuned to the GWW for more video game news.