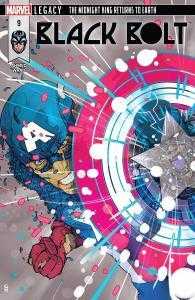 Crusher Creel, aka The Absorbing Man, sacrificed himself so his friends, Black Bolt and Blinky, could escape from the Jailer. The two return to Earth, with the help of Lockjaw, to fulfill their last promise to Crusher and break the news to his wife. A group of his closest friends celebrate the former villain’s life in a touching tribute, with some unexpected appearances from heroes paying their respects to the Absorbing Man.

This is one of the most heartfelt and touching comics I’ve read in a long time. Crusher Creel, a main villain from the Thor series, became one of Black Bolt’s closest friends and ally in the hellhole of a prison they were both condemned to. Crusher brought a lot of heart and comedy to this series, he even gave the Inhuman the nickname “Wishbone.” I didn’t think I’d find myself getting so attached to the character until his heroic demise, so seeing Blinky, Black Bolt, Titania and the Wrecking Crew (plus some unexpected superheroes!) pay their respects by burying his trademark ball and chain in an empty coffin, was a great and emotional sendoff. You really did feel for Titania in this issue too, it was great to see her character being explored in more detail.

The beauty of this fantastic run by Ahmed and Ward is how they’ve brought such a stoic character to life. Black Bolt can’t talk because of his powers, yet they’ve managed to convey so much more emotion and depth to the character than ever before. I’d never think that the former Attilan King would end up becoming best friends with a former villain and caring so much about Blinky, but here we are. And yes Captain America does guest in this issue, but the cover is slightly misleading as it’s a very low key appearance to pay his respects. We get some familiar faces pop up at the end of the issue, presumably setting up the next storyline, but it does feel a little jarring. 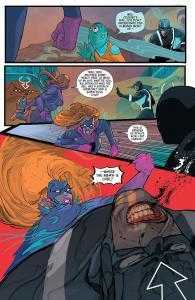 I absolutely adore Ward’s style of art throughout this title, it’s such a visual treat – so distinctive and surreal. The lovely color palette he uses for the funeral scenes are sublime and so fitting. He also brings so much detail and emotions to the characters, particularly Black Bolt and Titania. I particularly loved the beautiful swirled panel of Blinky telepathically showing Titania Crusher’s wish to tell her that he didn’t leave her and that they had kids in the prison.

This truly is one of Marvel’s best ongoing series, there’s so much heart and soul to it as well as a fantastic visual style. I’m intrigued to see where they’re taking the character next following his return to Earth. I highly recommend picking this title up if you haven’t yet!