The Lenovo Flex line is not as well known as Lenovo’s other lines such as the Yoga and ThinkPad. But there is some magic here, particularly with the Flex 14, that consumers need to know about. The Flex 14 supports a discrete GPU for a little more gaming performance than the standard Intel HD 620. It also supports fast charging, an active pen and a fingerprint reader. There is a lot to like here, and the real distinguishing feature is the discrete GPU. A good comparison product if you don’t need the GPU, is the Yoga 730 13. I had the Flex 14 for a few weeks and found it to be at standard ultrabook performance levels, with a very professional look. It’s priced well below $1,000, despite looking and feeling like it has the build quality of the laptops typically found above that price point. It starts at just $549 (without the discrete GPU). It’s a great choice for students, teachers and professionals that need a little GPU oomph from time to time.

The Flex is a 2-in-1 device, which is very common now. What’s less common is a 2-in-1 with an aluminum and plastic composite body and discrete GPU. Lenovo absolutely owns this market and I think of the Flex 14 as Lenovo showing it’s muscles. You get the latest 8th generation Intel i5 CPU, known as Kaby Lake R. These CPUs run cooler and can still provide a turbo boost when needed, leading to quieter fans and cooler devices. The display is a little dim but otherwise nicely designed with thin bezels and a properly mounted webcam (on the top). The keyboard is fantastic. It feels great to type on and is backlit. It follows the latest trend in keyboard layouts for ultrabooks: 6 rows with a compressed arrow key cluster on the bottom right. The entire keyboard area is rectangular in layout. That may sound like a strange thing to call out. Note that many laptops are shipping with the arrow key cluster offset lower than the space-bar. That is uncomfortable for many users. The fingerprint reader is quick and rests below said arrow key cluster.

It’s not all sunshine and rainbows, however. There are 3 things I’d change about the Flex. First, you have the excellent Harman speakers, which unfortunately suffer from down-firing placement. Effectively, they sound best when using the Flex 14 in tablet or tent mode. Second, the lack of Thunderbolt 3 means you can’t connect an external GPU for additional power. I suppose this is acceptable as the majority of the market for the Flex will not be looking for gaming performance. If Lenovo would release a 2-in-1 exactly like the Flex 14 but with Thunderbolt 3 – they could market it to gamers. In fact, Lenovo has everything they need, such as an eGPU called the Thunderbolt 3 Graphics Dock. Pair these together and a gamer could be a pro on the go and gamer at home. Finally, I think every laptop needs a lip. It’s difficult to open this laptop. It’s heavy and the hinge is tight – that’s a good thing unless you’re trying to open the laptop. Oh that power button. It’s on the side of the laptop, which is not ideal. It’s easy to bump it and trying to press it blindly will take some getting used to. Actually pressing the button feels great – which I’m a fan of. 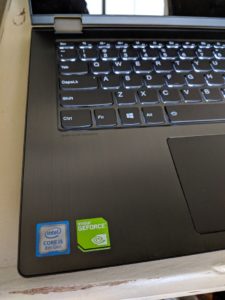 As a gamer, I appreciate the included discrete GPU in a laptop that looks like it’s all business. Granted, the NVIDIA MX130 cannot compare to even a GTX 1050. The Flex 14 has an awesome mix of pleasure and performance in a fairly lightweight package for a 14″ laptop. For comparison, my Razer Blade Stealth 2017 weighs 2.93 lbs. For less than one more pound you get a larger display and a discrete GPU with the Flex 14. I’d also point out the keyboard on the Flex 14 is more comfortable to me than the Stealth. In favor of the Stealth, however, is it’s eGPU support. The Flex 14 lacks Thunderbolt 3.

Day to day performance is excellent. I rarely heard the fans spinning while I worked indoors through Microsoft Office and Chrome. Students and professionals can check the box on performance. But anyone seeking to leverage the dedicated GPU will need to research cautiously. The MX130 is not meant to crush Kingdom Come: Deliverance or Doom. As you’ll read below, the MX130 is good enough to comfortably play games from the last generation, such as Dark Souls II. But up against newer games, like late 2017’s Vermintide 2, the game was only playable at low settings.

Finally, battery life is really great when you’re not gaming. I was able to get 8-9 hours with the battery mode set to best battery life. In just 15 minutes you can charge the laptop to gain 2 hours of life. That’s rad!

The Flex 14 can tackle just about anything the average consumer would throw at it. From Microsoft Office to light gaming – big thumbs up to Lenovo for this one. Just know you’re limited to the GPU you’re getting here and can’t connect an eGPU.