Inside of the beautiful, ultra slim chassis of the 720s, is one of Intel’s latest quad-core CPUs. Both inside and out, the 720s 13 is an ultra portable laptop you’d be happy to carry around for work, school or just for fun around the house. There is plenty of power for the Microsoft Office suite and dozens of open browser tabs. The 720s is all about the here and now. It has all of the features you expect of an ultrabook in 2018: super thin bezels, a backlit keyboard, Windows Hello support, charging over USB Type C and Thunderbolt 3 support. I spent two weeks with the 720s as my primary laptop (replacing the Razer Blade Stealth). Here’s what I experienced.

With a deep gray, brushed aluminum chassis and super thin bezels over a moderately bright display, the 720s is a looker. There is very little flex around the backlit keyboard and the display is very tight with a sturdy hinge. You cannot one-hand open this laptop, but it feels durable. The input/output options are good for a 13″ laptop that weighs less than 2.5lbs. The Razer Blade Stealth has a full-size HDMI out and is a hair thinner than the 720s. Be sure to take a dongle with you if you need to output to another display. The only fan grill is on the bottom of the laptop. There is a long rubber foot and two smaller ones that keep the laptop elevated from whatever flat service it may be on, to improve cooling. Comparing the feet on the 720s to the Razer Blade Stealth, I would like to see thicker feet on the 720s. After just 2 weeks of use, the longer foot is seeing wear.

Dark Gray is my favorite laptop tone. I’m not sick of it at all. The 720s is a solid brush of dark gray all around it. The services are smooth and rounded along the edges. The only branding on the lid is the Lenovo logo, which is slightly receded into the chassis and is a light black color. The lid feels as though it’s wrapped in titanium, sort of like the Essential Phone. It gives the laptop a very premium feel, despite it’s sub $1,000 price tag. 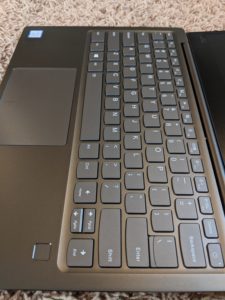 The keyboard a great feel and the power button is integrated into the function row (upper-right-most button). The backlighting bleeds through the keys and illuminates not only the primary keys, but also the function buttons. Just below the keyboard’s arrow keys is a fingerprint sensor. It’s pretty good, but I noticed it wouldn’t work if my fingers were wet. Below the spacebar is the trackpad, which is the perfect size and slightly positioned to the left of center. Using Windows Precision drivers, I found the trackpad precise and comfortable to use.

Intel’s 8th Generation CPUs for laptops are adorned with the letter “u” following the model number. These CPUs are quad-core enabled, which is helpful if you are editing photos or videos. I do my share of photo editing and audio compression. But I do not edit video. I can’t speak to that but I can tell you I noticed audio compression speeds were acceptable for an ultrabook. I didn’t notice a difference between the 720s and the Razer Blade Stealth, which has a 7th Generation Intel Core i7-7700u. My needs are 95% Microsoft Word, Excel, PowerPoint, Outlook and Chrome. I spend several hours every day in these applications and often have multiple files open simultaneously. Qualitatively, I’ll state I never felt the need to close anything in order to speed up performance. The 720s has been consistently good at tackling my every day requests. Booting fresh took 11 seconds and shut down takes about that long as well.

The Lenovo IdeapPad 720s is for anyone but gamers. 13.3″ is the sweet spot for ultrabooks and the new Intel CPUs really give this beautiful laptop the power you’ll need for most of your daily tasks.