Thanks to Lenovo for providing GWW with this demo unit.

Lenovo’s Legion Y720 (“720”) is an intriguing laptop. In typical Lenovo fashion, it maintains the design of preceding models from year’s past. In this case, the 720 clearly dates back to the IdeaPad Y510p from 2013. After 4 years Lenovo has demonstrated excellent iterations of that design. These laptops have become more powerful and less expensive in an era where competition is stiff; Acer, MSI, Origin, HP, etc. all have good options for 1080p gaming. And these rigs all got lighter. Lenovo’s 15″ gaming laptops were never as heavy as the 720. 2013’s Y510p was 5.95 lbs. 2014’s Y50 touchscreen was 5.6lbs. And 2015’s Y700 was 5.7lbs. Needless to say, I expected a lot from the 720, but I didn’t expect the weight increase, particularly while laptops are getting slimmer. Competing laptops to the 720 are weighing under 5.5lbs. It may seem petty to knock the 720 for weight in my opening paragraph. The reality is I’m a huge Lenovo fan and I just can’t seem to shake my disappointment. Going back to the Y510p, it was 5.95lbs with the same form factor (15.6″ display, full sized keyboard, etc.). It had 2 GPUs! Yet the 720, with a single GPU, is a whopping 6.9lbs. That isn’t the full story, of course. There is so much more to a laptop than just the weight.

As I always say, the real value in a laptop depends on the needs of the user. On one hand the 720 is a solid 1080p gaming performer at a fantastic price. On the other hand, it’s price, size and weight mean it’s a different class of device than a Razer Blade, which sports the same CPU and GPU at 4.2lbs in a 14″ display. When compared to other laptops in it’s class, such as the HP Omen and Acer Helios, it’s the best value from a gaming performance to price perspective. Starting at just over $1,000 you’re getting a really good 1080p performer. Climb up to $1500 and you get a great one. If you’re looking for that value, the 720 is worthy of your consideration. When other requirements are considered, such as use on a couch or for business travel, at 6.9lbs the 720 is not a contender. It’s all aluminum exterior and overall rugged feel is actually charming at times. If your portability requirements are limited and the 720 would mostly sit on your desk, you’ll love this laptop and it’s price.

Our test unit is top-notch and retails for $1,499.99 as of the time of this writing. Here are the specs:

With these specs you can expect 60+ FPS in any modern 1080p games at medium to high (but not ultra) settings. 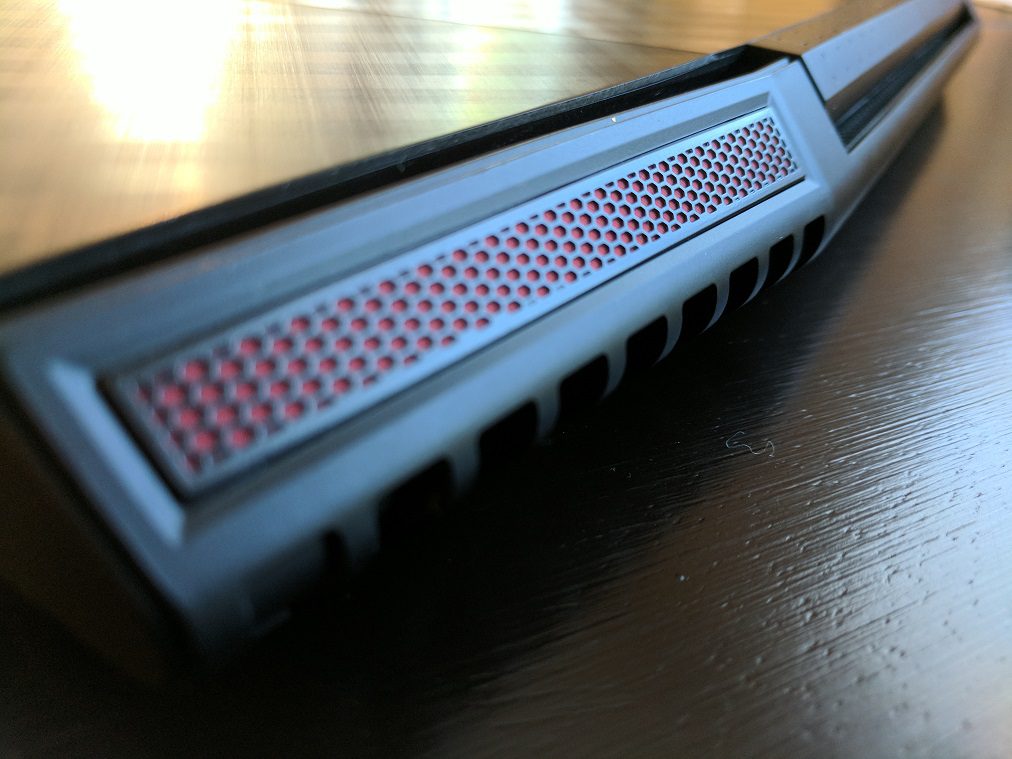 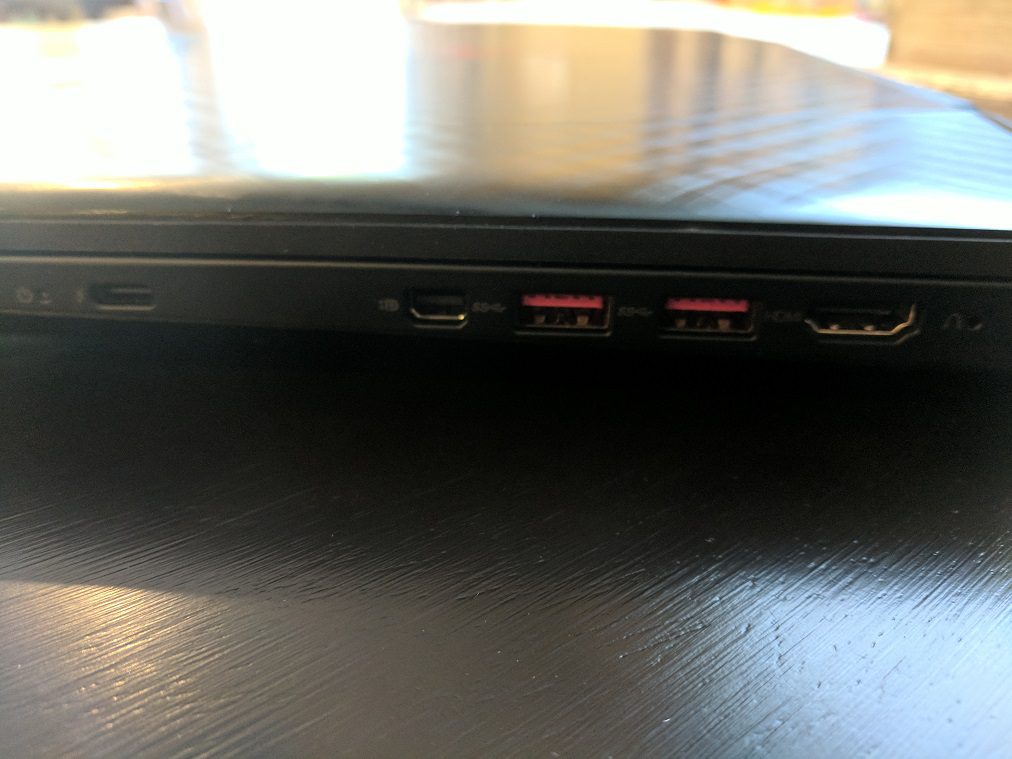 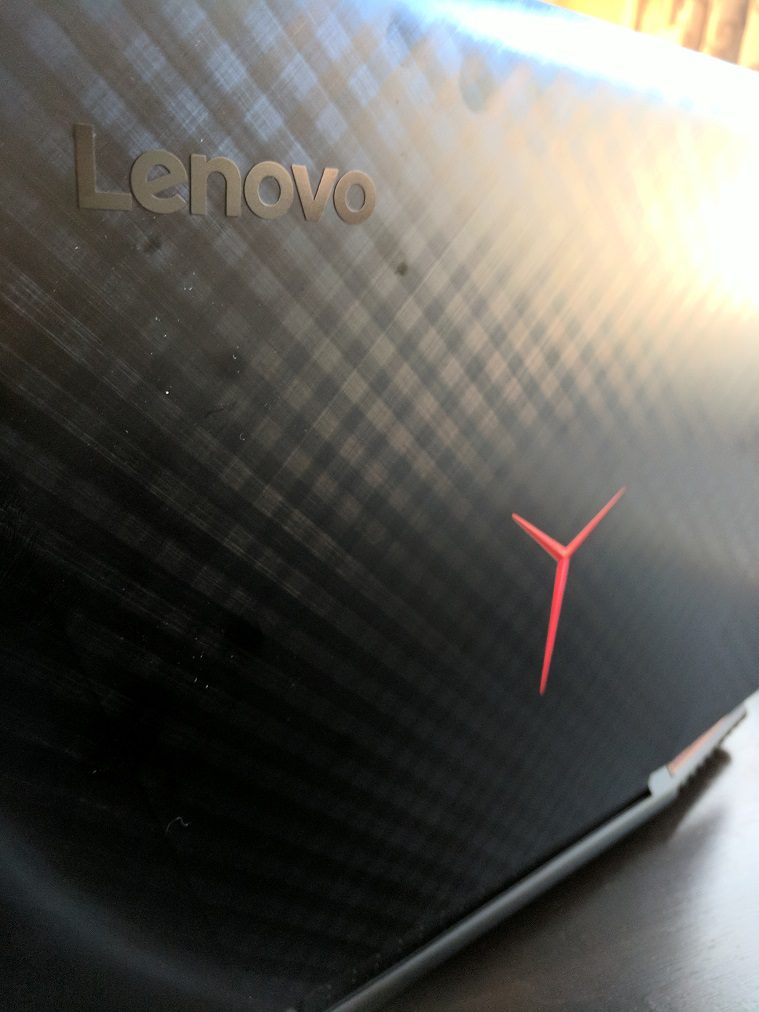 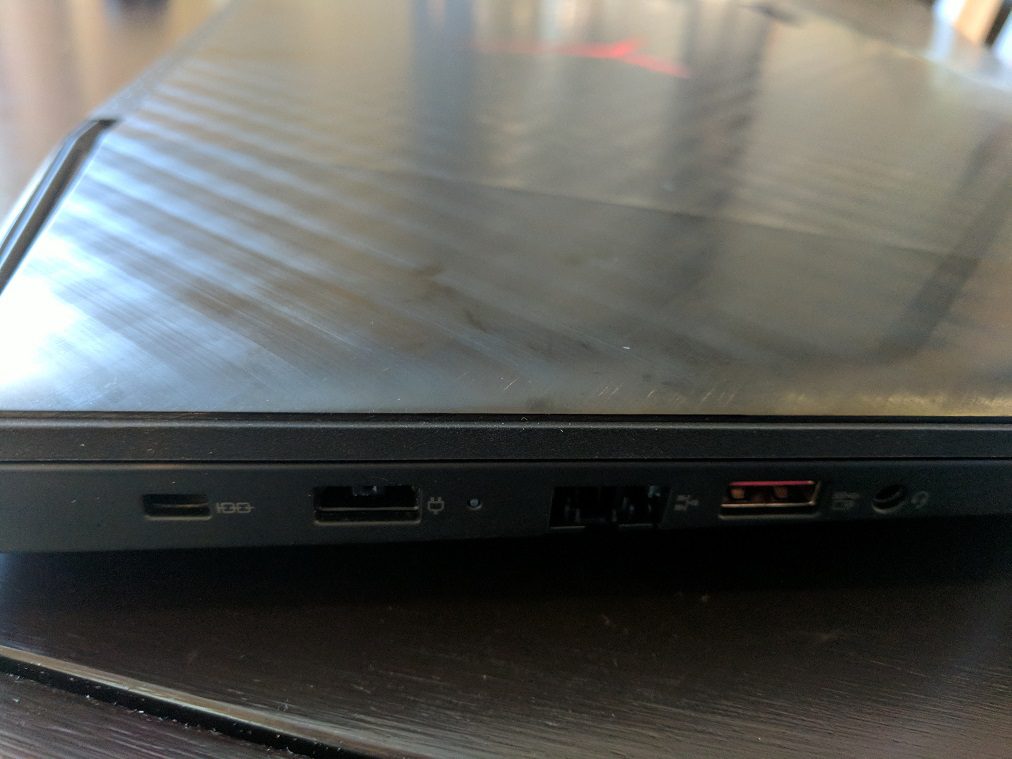 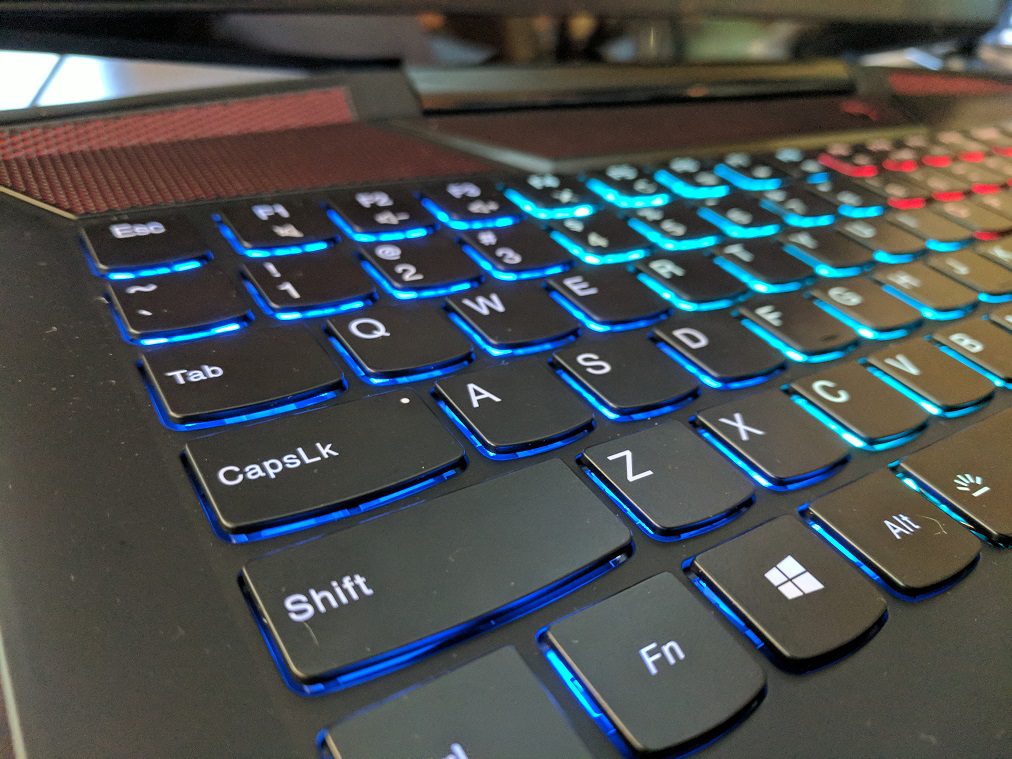 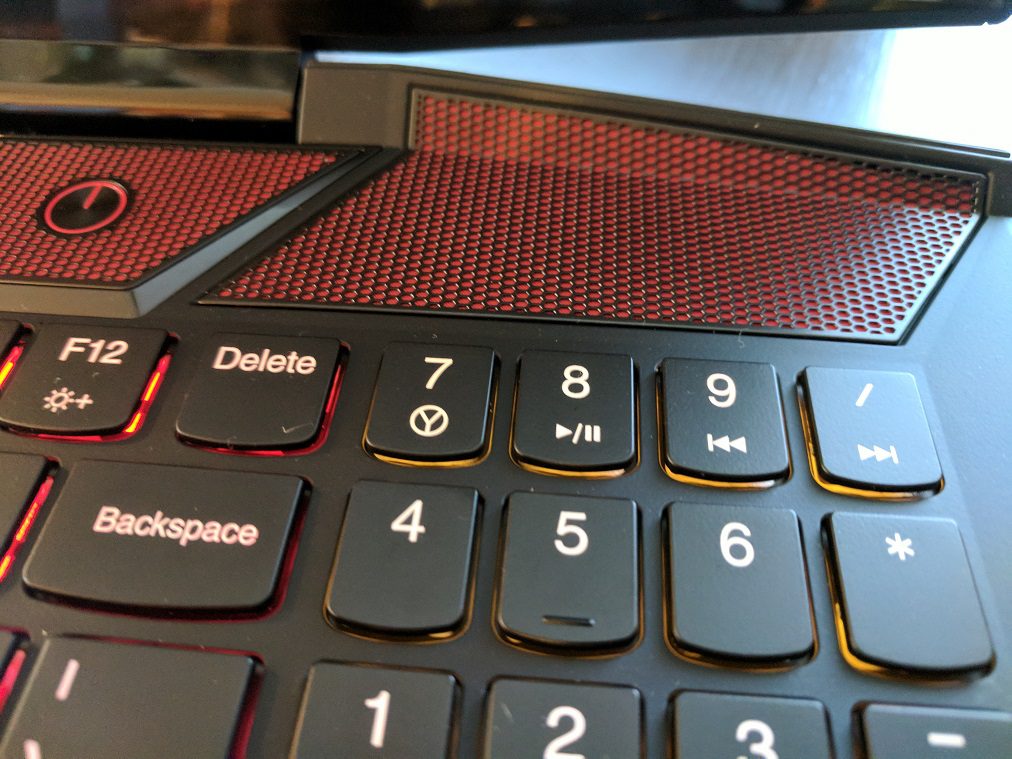 Aluminum is in. Plastic is out; sorta. The exterior of the 720 is all aluminum, and it looks great. Behind the display is a neat, subtle checkered pattern surrounds the red-lit “Y” that represents the Legion brand. It doesn’t scream “gamer” like the Razer 3-headed snake logo. I/O is well represented, save for a SD card reader. Starting on the left, the 720 has a power input (proprietary), Ethernet, USB 3.0, headphone/mic jack. On the right you’ll find a full-size HDMI out, two USB 3.0 ports, DisplayPort and a single USB-C Thunderbolt port. I love how easy it is to access the hard drives and RAM. All you do is remove a few screws from the bottom and lift the shell.

The backlit keyboard is membrane style and feels good to use. I’m not a fan of the number pad’s placement and I really think arrow keys need to go away. The backlighting system is not incredibly bright and Lenovo’s Nerve Sense software (love the name) doesn’t allow for the level of customization as, say, Razer’s Synapse. You can change the color of four zones or segments of the keyboard only. You can also select from a handful of lighting patterns. At this price point you rarely get this level of sophistication. I can live with this, but what drives me nuts is the lighting is underneath the keys. This means the key’s characters do not light up.

The trackpad is mediocre. It uses Synaptic drivers which I have never found to be solid. This is a problem for PC manufacturers. Something as simple as a trackpad should be flawless. Forgo multi-touch and crazy designs if that causes basic tracking to fail.

The display on my unit is the 4K model (3840 x 2160). It’s unfortunately not bright. I’m in a dark room at the moment and I have the brightness at maximum. Usually in a dark room I use a 25% brightness level on other laptops. I’ve heard that Lenovo uses a dark film on their screens that can all be removed with a warm hair dryer. In doing so you can expect a small bump in brightness. I have not attempted this and can’t say I would recommend it.

What matters most is how it feels, and the 720 does feel great, while it’s on a desk. It’s large and substantial with a sweet red-lit “Y” on the back of the display. The 720 maintains the historical all black design with Knight Rider red accents around the ports and speaker grill. The grill occupies much of the space between the keyboard and display hinge. I like how it looks – the sharp angles are attractive and send a message that this is a gamer’s laptop. I don’t care for the hinge itself. It feels sturdy and durable, but there is so much responsibility placed on it that the base creaks when you open and close the lid. Had the hinge been a little wider, and spread that responsibility around, I think it would alleviate the pressure and still look good. Within the speaker grill is the power button which unfortunately does not light up. It’s nicely integrated, however, and has a premium feel to it. People think I’m crazy for writing about power buttons. Pressing the power button is an emphatic, meaningful action. I want the proper feedback when I use it.

When it came time to actually do some gaming, I managed to forget all about the weight of the 720. It’s overall size and sturdiness actually contributed positively to my experience. I started with Doom at 1080p and Ultra settings. I managed to average 58 FPS while using the 720’s display. Performance was glorious but the physicality of the 720 actually made it better. As a mouse and keyboard fan, my left palm was resting on the keyboard and I never felt it flex or heard any creak or cracks along the keyboard or base.

I love so much about this laptop but I can’t seem to get over it’s weight. If you plan to keep it on your desk and not move it around very much, then it’s a valuable option for good 1080p gaming. In the above table you’ll see how the 720 has performed in 2 particular 3DMark tests against other Lenovo hardware. IT destroys past Lenovo gaming laptops, and it’s big brother, the Y920, is nearly performing on par with a desktop GTX1070 GPU. In either case, these are great results for laptops that don’t have the cooling capabilities of desktop machines. Also, for what it’s worth, my Razer Blade (late 2016) achieved slightly lower scores than this similarly equipped 720. Likely the additional size of the 720 leads to inherently better cooling, allowing the GPU to drive greater results.

The Legion Y720 doesn’t get too warm or loud, it has excellent I/O, performance is great and it’s not ugly. Between Lenovo’s three gaming models (Y520, Y720, Y920), the Y720 is smack dab in the middle. Lenovo sought to make this the default option for gamers. In fact, it’s the only model to include a built-in XBOX One controller transmitter. Even the high-end Legion Y920 doesn’t have that, which is an odd omission. At the $1,000 level, this is a sturdy machine that will impress enough at LAN parties while being a great desktop replacement with low portability requirements. The screen has some flex but the base is rugged and feels like a beast. The laptop’s overall weight contributes to a sense of ownership and that you bought or own something of substance. Which is great for those first-timers that are going from a desktop to a laptop.

Personally, if I’m going to have a 7lb laptop, I may as well bump up to the 10lb Y920. It has a more powerful GPU and CPU, and greater RAM capacity. In fact, I did, and it’s sitting atop my desk! 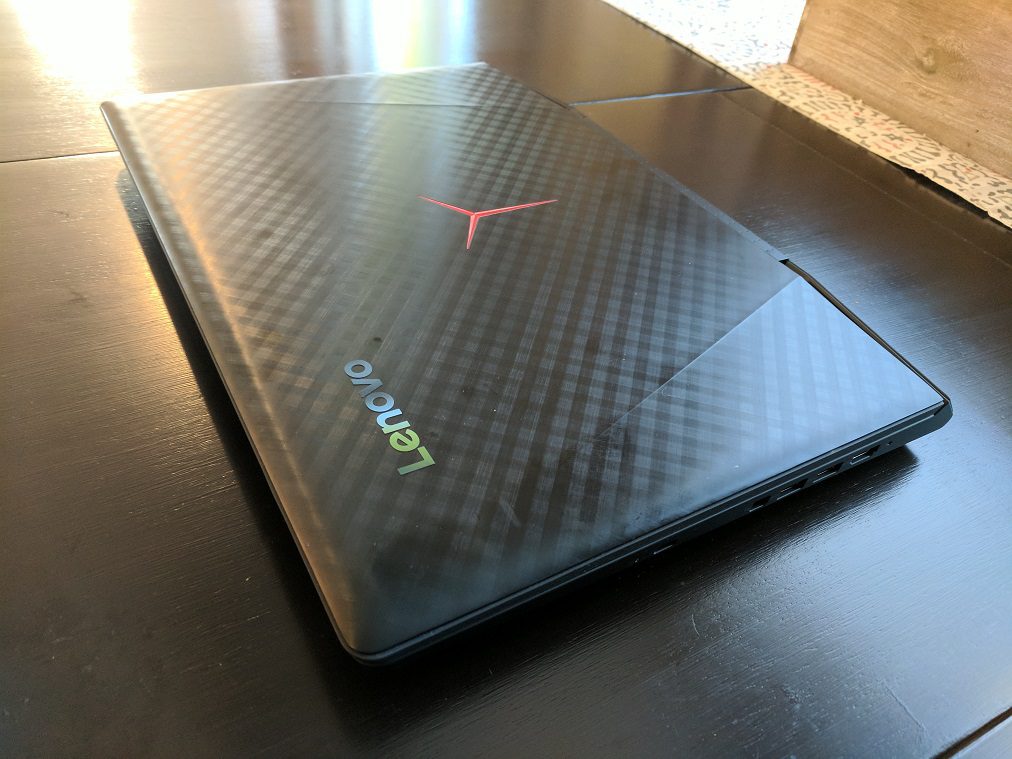