Review: Shadow of the Tomb Raider

Thanks to Square Enix for providing GWW with a review build of this game.

Lara Croft is at it again in Shadow of the Tomb Raider (“STR”) - the third entry in the rebooted series. STR brings more dynamic climbing and brutal combat to the series, along with some new elements to spice all of that up. If you’re into ranged combat with a bow or lurking in the mud and the darkness like John Rambo, you’re going to want to pick up STR. Fortunately, there is a free trial option for what is otherwise a $60 title (although you can find it for $30 or so right now during the 2018 holiday shopping season).

Lara and her pal Jonah are at it again as they once again avoid the evil mercenaries of Trinity in Mexico, South America and other nearby locations. The story is a fun journey through those locations as well as giving players an up-close look at ancient Mayan rituals that are being practiced in the ancient, but inhabited, city of Paititi. Throughout this journey, Lara is faced with the terrible results of her decisions. These are not decisions the player can make. Rather, sit back and enjoy the ride as Lara completes her journey to become the Tomb Raider. Divulging anymore would risk spoiling the story.

The story wouldn’t be interesting without good characters. Between Lara’s bravery and sympathy, she’s a dynamic hero. It’s not hard to buy into the idea of her pulling back a bow string and sniping an enemy from 30 yards away. And watching her hide in the shadows and knife a guy in the throat is super entertaining.

The environments are beautiful and active. T here is a lot of use of waterfalls, animals and vegetation to spice up the world. Impressively, STR manages to clearly show you the linear path of climbing despite all of the activity around you. One could argue that it’s too simple, but really climbing is fun and if it were a chore fans may rebel. I ran the game on a GTX 1070 Max-Q enabled laptop. With a 1080p resolution and a mixture of ultimate and low settings, I was able to get around 57-63 FPS. NVIDIA’s GeForce Experience application recommends using DirectX 12 on my rig, which I found surprising. 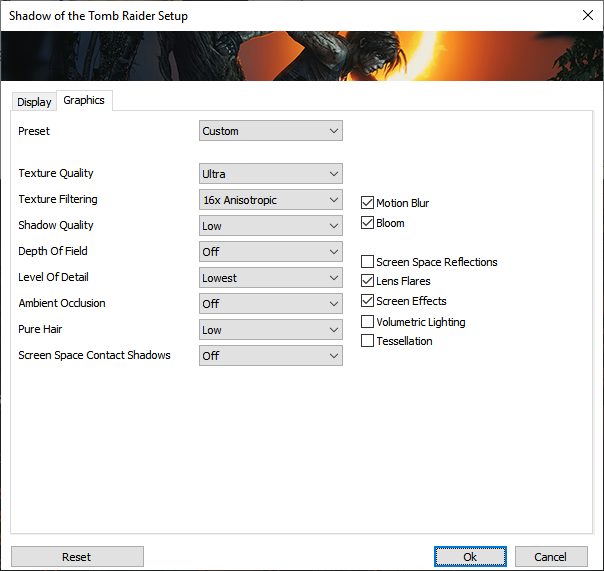 As expected, the game controls really well. But if you haven’t played a Tomb Raider game in the past, you may look at the gameplay and feel some hesitation. Rest assured that between stealth combat, climbing and swinging, the game has intuitive controls and it’s hard to make a mistake. Open field combat, however, can be a struggle. There are 2 new climbing mechanics: climbing onto overhangs and a grappling hook. The latter is a ton of fun to use and I can recall at least one section of the game where I had to grapple several times in a row, while swinging around.

There are times when stealth breaks and open combat begins. This is where I died most often. Finding cover is your best hope at staying alive in these situations. Without a target-locking system, you’re a fish in a barrel against Trinity or the enemies that come at you in the underground of Paititi. As fun as the stealth combat is, I would like to have seen a better open combat system so I didn’t have to fear breaking the stealth.

Earlier I mentioned that I enjoyed the stealth system. But that’s not because it’s perfect. Rather, I learned how to navigate it. Often stealth battles would break into open combat. Without a locking system I found myself getting shot up quickly.

There are some other oddities with the game that really bugged me - aside from everyone in Paititi speaking perfect English. Take, for example, a super fun stealth mission that starts after losing all of your gear due to a helicopter crash. After stealth killing a handful of enemies, which is just the beginning of that mission, I noted what I would have done: picked up a gun! i really wish Lara could pick up any gun from any enemy at any point in the game. Also, this is nitpicking but it really drove me nuts: while climbing ledges, Lara frequently needs to switch to her climbing axes. This transition is visually awful. The axes appear out of nowhere into Lara’s hands. She doesn’t reach to grab them from her satchel. STR is gorgeous and fun - I know Eidos could have done better.

Who is this For

Shadow of the Tomb Raider is a welcomed addition to the Tomb Raider family of games. If you’re looking for a grand adventure with fun stealth mechanics and enjoyable characters, this is the game for you!