For a few hours today, I felt like a Jedi. Lenovo and Disney have come together to create a wonderful Star Wars experience in augmented reality. Using your cell phone and Lenovo’s hardware, you can feel like a Jedi or a commander. Most of what we’ve seen come through the GWW tech shop has been virtual reality (VR). We’ve toyed with Oculus and PlayStation’s VR headsets. The Lenovo Star Wars: Jedi Challenges is quite a different experience. Augmented Reality (AR) provides an opportunity for the player to bring another world into their theirs. And what better world than Star Wars?!

The first thing you’ll see when you open the box is the lightsaber. A neat touch: when you pair the lightsaber to your phone it’s default name is Rey’s Lightsaber. I love that touch. Also in the box is the AR headset, which looks sorta like Leia’s helmet in Return of the Jedi when she sneaked into Jabba’s palace. I could be wrong, but there must have been some inspiration. Anyhow, I found it uncomfortable at first but eventually I secured it to my head well enough to not feel it was front heavy. Surrounding your eyes are several transparent lenses. This is why I prefer AR to VR. I want to see the world around me. I don’t like the idea of bumping into walls, desks, tables, or my little kids. There’s also a small transmitter included that runs on two AA batteries. According to Lenovo, most cellphones produced in the last “few years” will be compatible with the headset and Jedi Challenges app. It’s both iOS and Android compatible. My review unit came with a Moto Z2 Force which had no issues loading the game.

To see the hardware up close, check out my unboxing video.

There isn’t another Star Wars experience out there that is this engaging. An AI character named The Archivist is your trainer. The training split into three segments: lightsaber fights, HoloChess, and battlefield missions (think of an RTS). I tried the battlefield missions – it’s neat. But I want to be a Jedi. I poured close to two hours, off and on, to that segment. I returned fire by Stormtroopers, sliced up droids, and battled with Darth Maul. It was amazing. As you progress you gain force powers and unlock two other lightsaber colors. Returning fire is a ton of fun and when the bad guys get close enough that you can slice them up, it’s super! There is a bit of lag with the lightsaber, which isn’t always an issue because you have time to decide where your lightsaber should be. 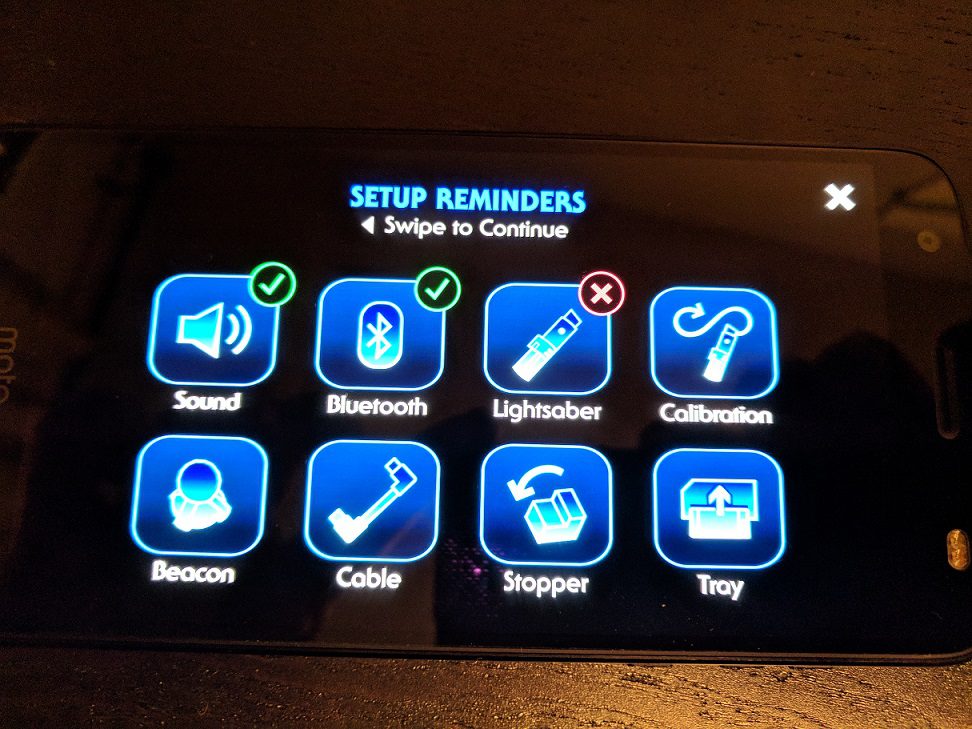 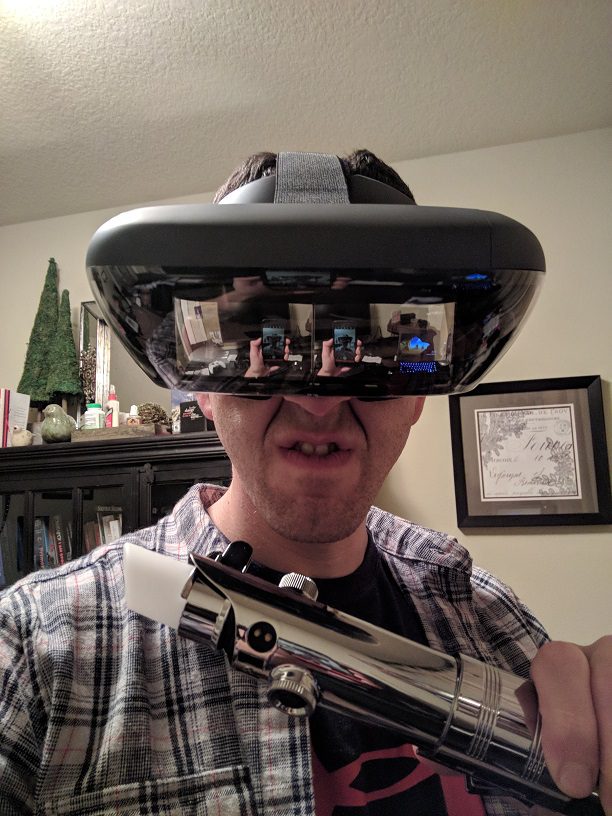 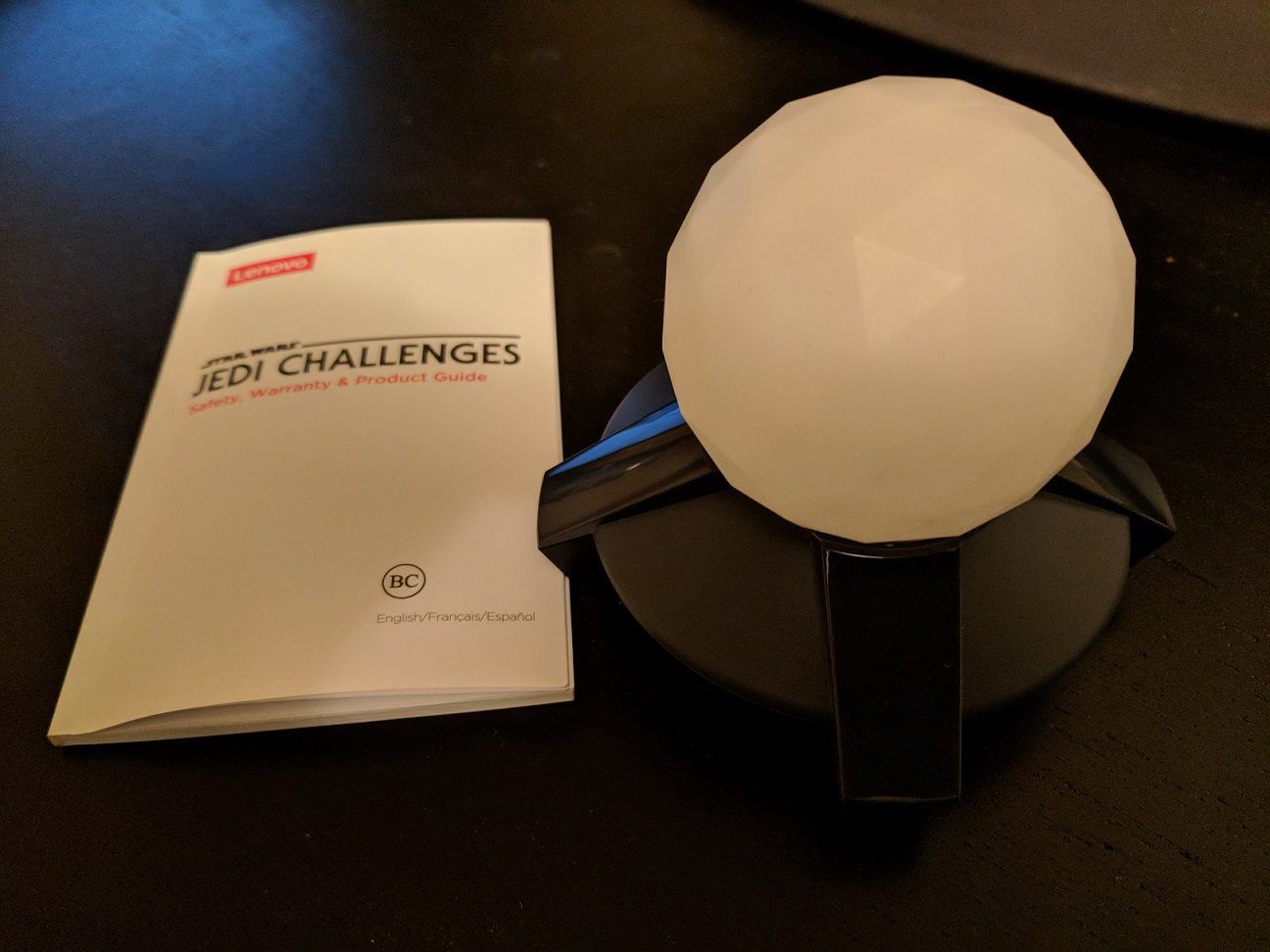 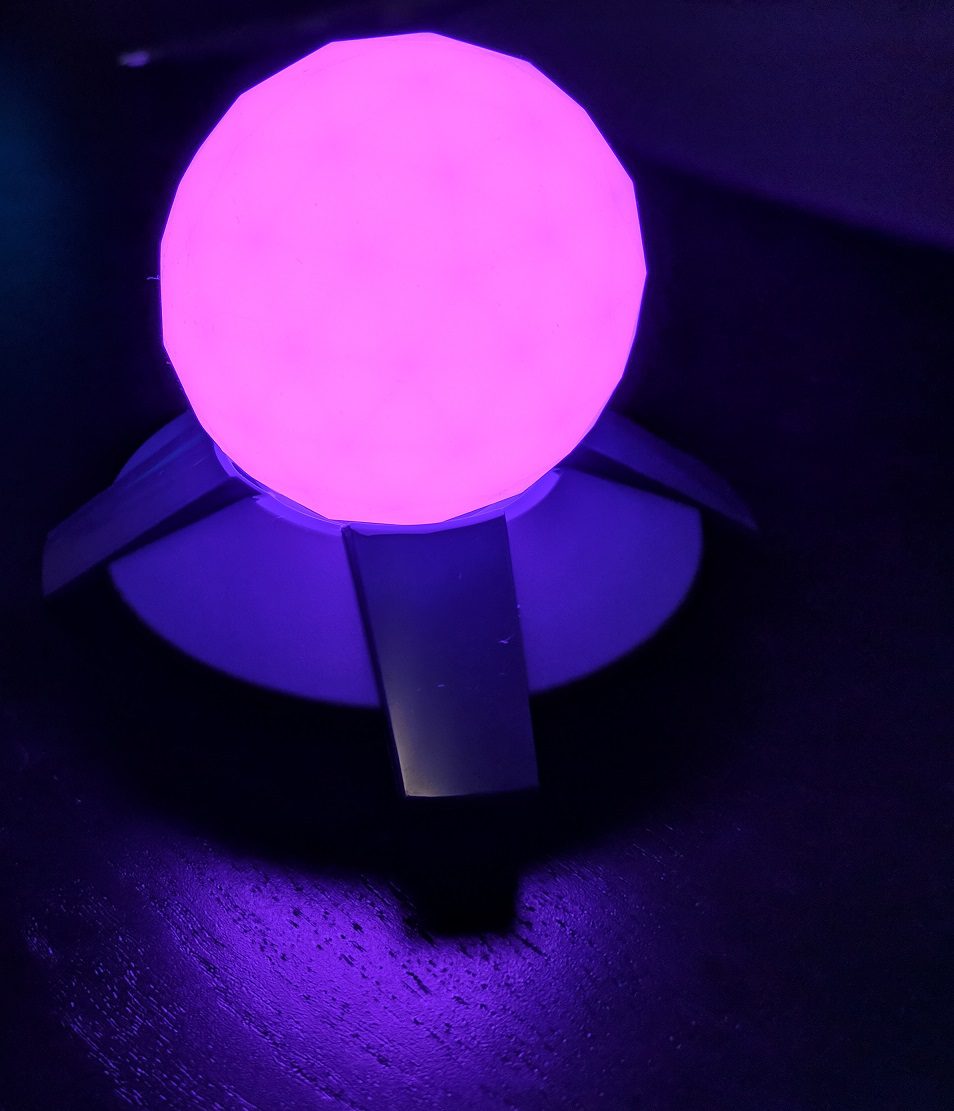 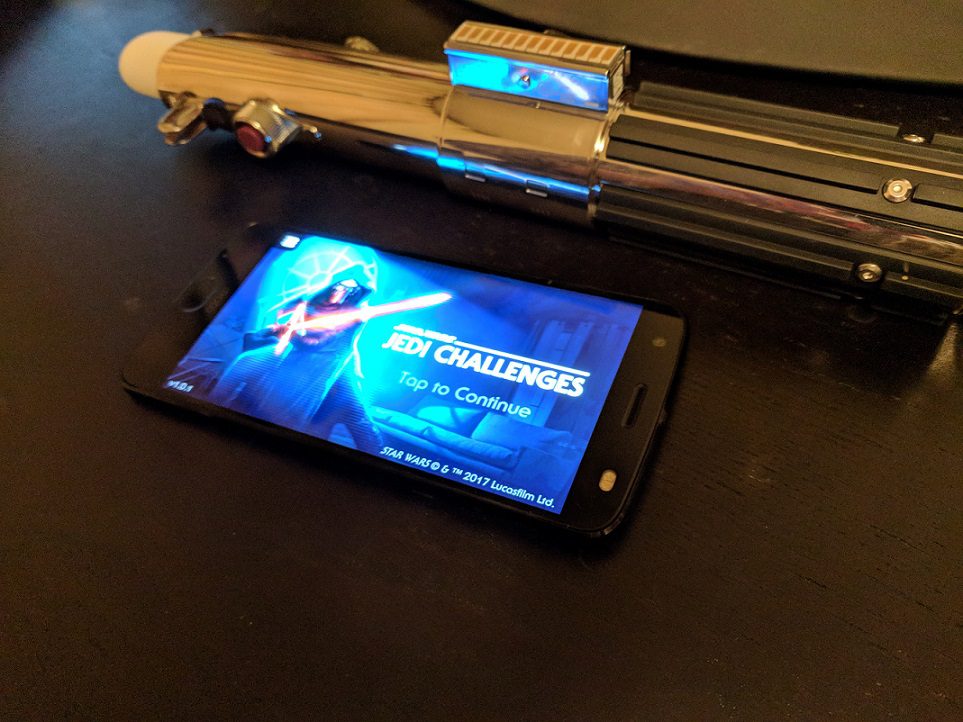 There’s just one problem: it’s not easy to stop playing and pick it all back up later. There are several steps from “I want to play Jedi Challenges” to “I’m playing Jedi Challenges.” From loading the app, to connecting the phone to the headset and finally pairing and lightsaber to the headset. All this means is you need to set expectations for yourself. This is not something you want to play for 5 minutes. If you play for an hour, you can expect to lose 10-15% of your battery (that’s what I found with the included Moto phone).

If you love Star Wars and you want to be a Jedi, this is as close as you can get with today’s technology. The sights and sounds that invade your world are authentic and entertaining. At $199.99 I don’t expect this to be a hit, unfortunately. I also don’t expect this to be the last set of hardware nor the final version of the current application. It seems Disney and Lenovo have made a solid investment into this product and I’ve already seen app updates and it hasn’t officially released. They won’t be able to improve how the visuals are transferred to your eyes, but hopefully they can solve that lag and add a lot more missions. I’m a huge Star Wars nerd, so I’ll be buying this one! 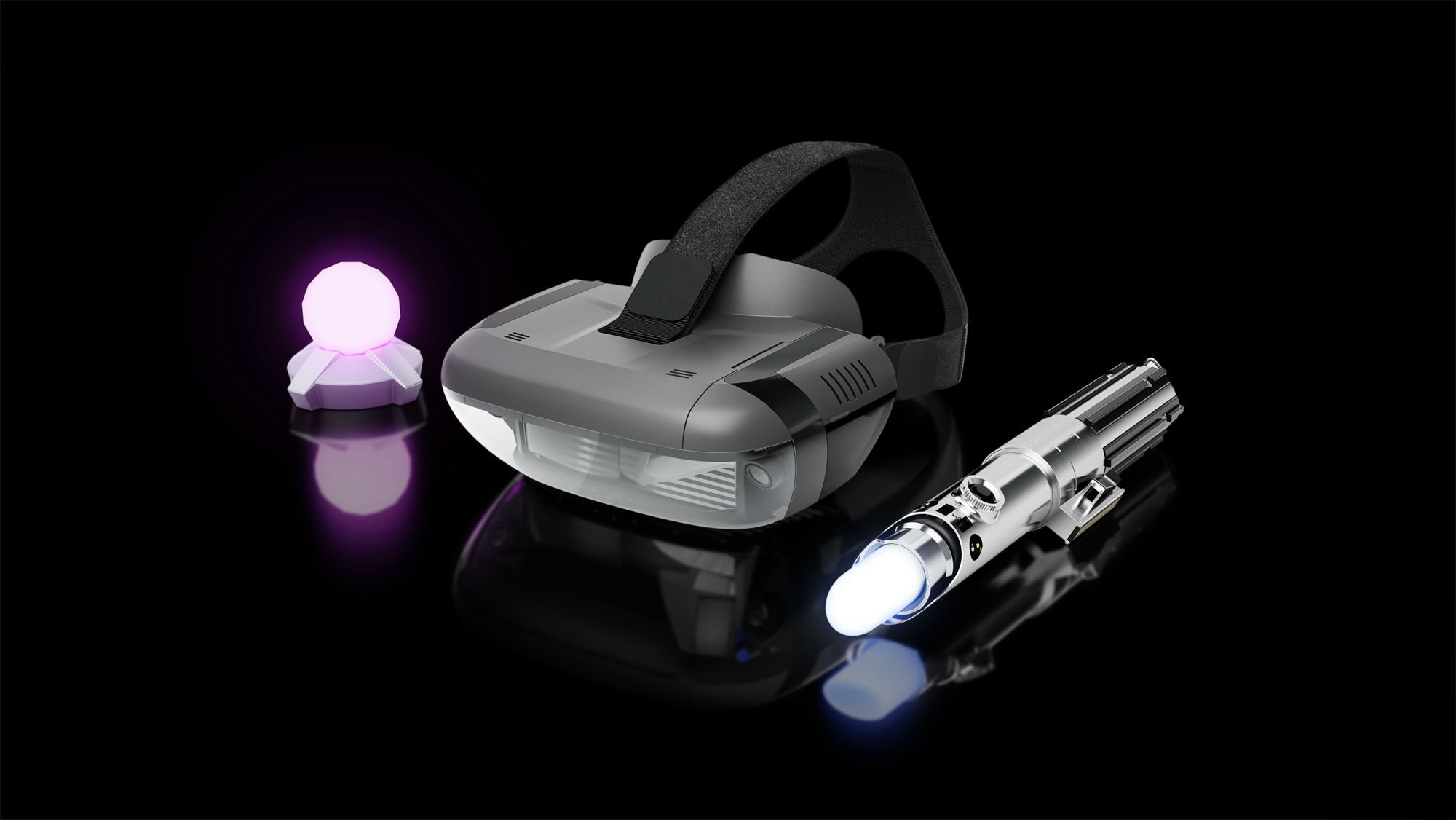 The Nintendo Holiday Experience is Coming to ...