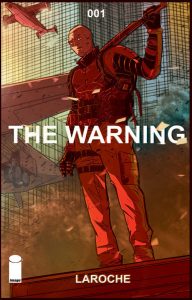 The Warning is Image Comics newest sci-fi series by creator Edward Laroche. A conversation between soldier and insect is interrupted by the arrival of futuristic military aircraft. What happens next is an introduction to some big sci-fi concepts. A rogue planet is headed towards Earth and our only hope appears to be a group of soldiers who may have some genetic alterations.

Edward Laroche is on full duty as writer and artist. Laroche’s script builds a world seemingly in the near future. He gives us a few hints at how each chapter is connected without showing his hand. The out-of-sequence story structure gives us the feeling of a lived-in world. The reader is given enough information to fill in the blanks without every detail being spoon fed.

Laroche’s artwork is effective here. He is masterful with his characters’ facial expressions. The reader can look at a character and instantly tell what emotion the character is feeling with little to no dialogue. The panel layout against the black pages gives this book a very cinematic feel. The pages with just one panel  centered on the page is where this concept really shines.

The Warning brings the reader into an interesting world. This issue is primarily set up but provides a few concepts and story hooks to bring the reader back for more. The story is reminiscent of modern sci-fi films such as The Arrival and Edge of Tomorrow. The real star here is the dynamic coloring and page layout which draws the reader into the story.

The Warning hits local comic book shops on November 28th. This is a must for fans of military science fiction and fantastic art.