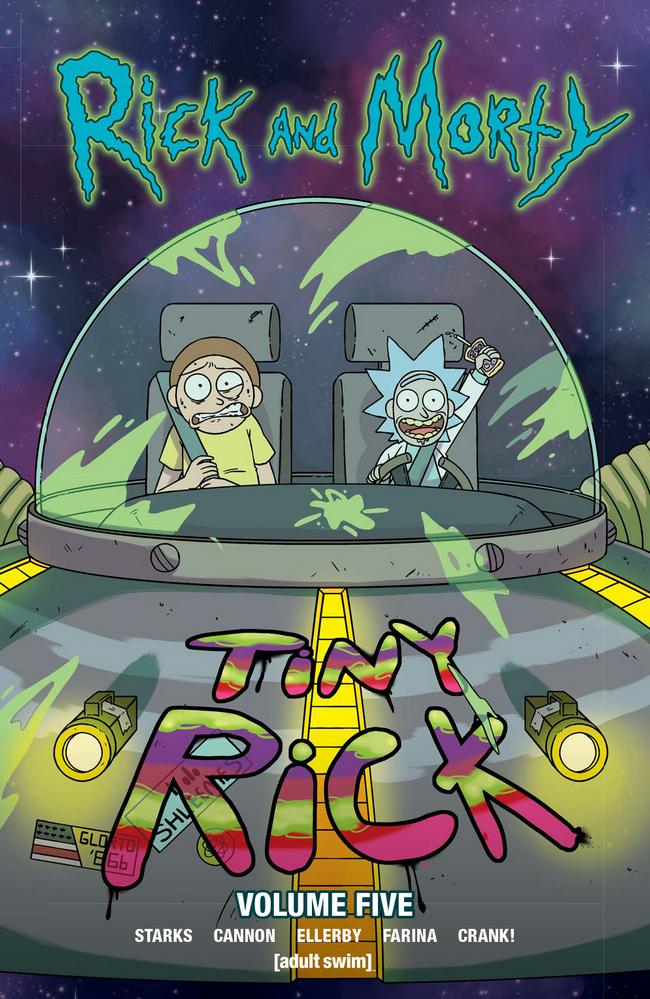 I’m done (until the next one!)

Poor Jerry… actually, scratch that, I have lost all sympathy for him as the show and comics progressed. Oh gosh… I’m turning into Rick! Once again, Jerry is emasculated, and in order to feel good, and have some respect, he visits Doofus-Rick, the only Rick that’s dumb-ish. However, in that “Doofus-verse” there exists a Jerry unlike any Jerry encountered before: he’s not a doofus! But- but- but… how can this BE? Every Jerry in every universe is vastly idiotic (hence the daycare for Jerrys that happens to exist). So of course, seeing as this new Jerry is amazingly smart and strong, he quickly bullies our beloved (?) Jerry, and switches places with him.

Gee… who would notice THAT?

2)”A Tale of Two Jerries: That Thing You Doofus”

Yeah, Rick is no match for Smart Jerry, making everyone’s life a living hell… well, not Beth, she’s oblivious to the change (really??). Summer is being kept safe in a pocket universe, and Rick and Morty try to find ways to defeat this unbelievably smart Jerry.  Yeah. That doesn’t go so well, especially when they’re all brought to the Council of Ricks… 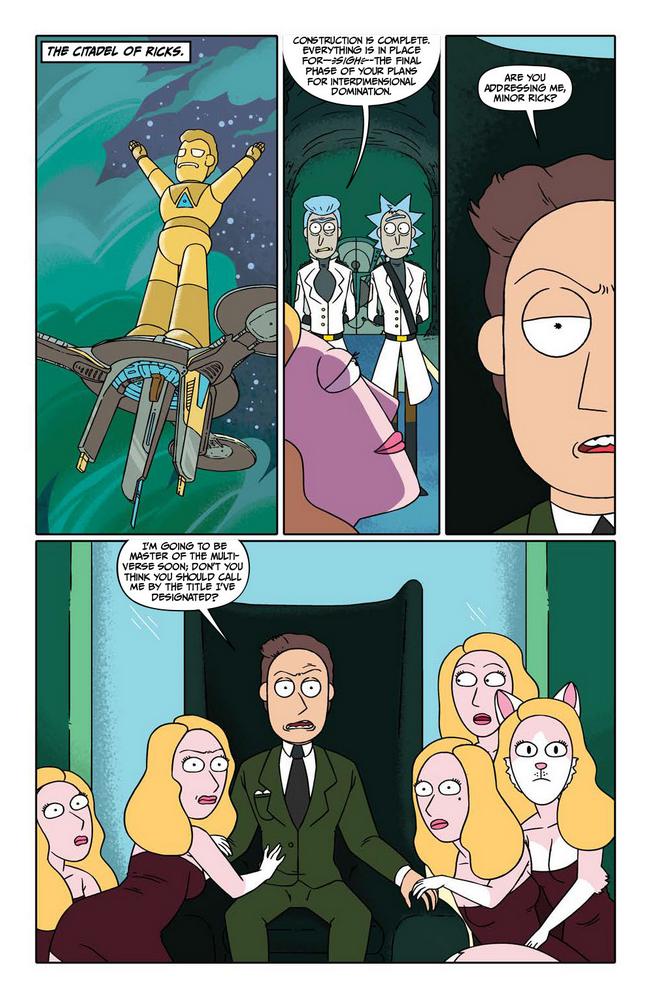 Smart Jerry takes over the Council of Ricks, and knows everything the Ricks will do before they do it, counteracting every attack, even our Rick’s giant robot. Darn. But guess who inadvertently saves the day? Doofus Rick and our idiotic Jerry. Seriously, who would have thought that that would happen?!

Certainly not me… but I’m glad those two doofuses could have their time in the hero’s circle.

Morty doesn’t need help, right? On a ghost ship filled with literal ghosts, does he really need an axe? Nope. Ah, he broke his legs. Brilliant. Comes back home, is he safe? Nope, re-breaks his legs and misses out on a prom dance with Jessica.

You gotta admit, that kid has optimism.

TINY RICK! Yeah, not really. Apparently, a Rick went rogue and wanted to kill all the other existing Ricks… but why did he besmerch the name of Tiny Rick?! Everyone LOVES that guy!

However the burial befit for a Rick is hilarious, and I’m not one to spoil it. 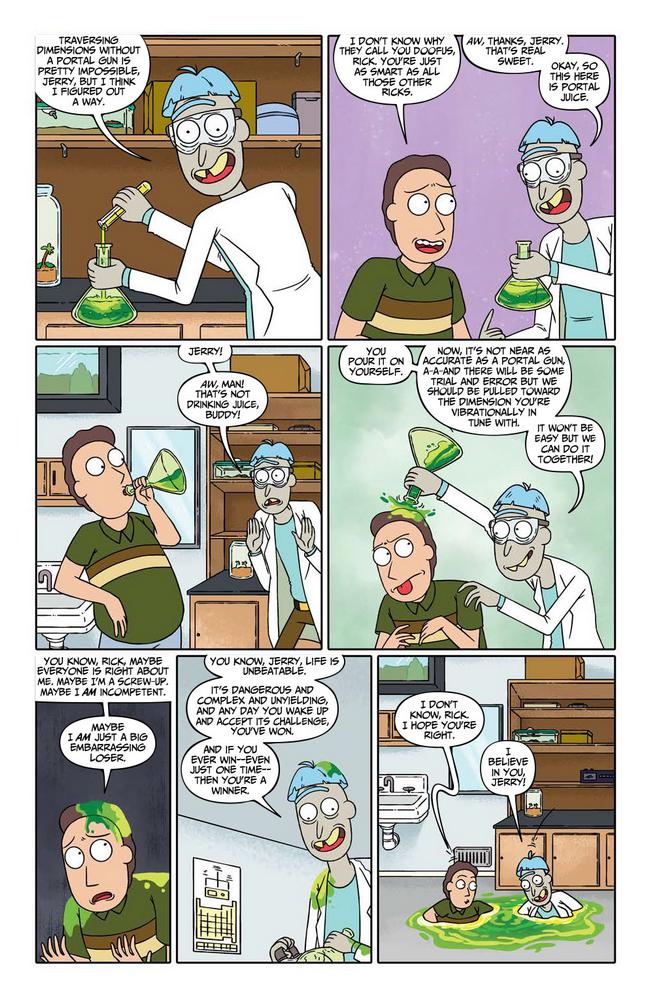 Written, Illustrated, and Colored by: Mark Ellerby
Lettered by: CRANK!

To keep this short and sweet, Beth becomes her father - just not as smart. An alien barges into their home looking for Rick, but he isn’t there. So, Summer offers her help, along with her mom, Beth. Summer tells Beth she can be just like her father, seeing all Rick does it get drunk and presses buttons… unfortunately that kind of luck doesn’t run in the family.

*cue the explosion and the death of many aliens*

“Rick and Morty in: It’s a Kind of Morty Magic”

Morty is struggling to get his nerves in order, to ask out Jessica… AGAIN! Geez, Morty…

Rick is tired of his grandson constantly trying and failing, so he brings in another Morty from another universe, a Morty with no inhibitions. Although, holding back a bit would have been helpful, seeing as Alt. Morty said some rather sexual things to Jessica.

Poor Morty can’t get a break.

Don’t worry, this Jessica likes you. 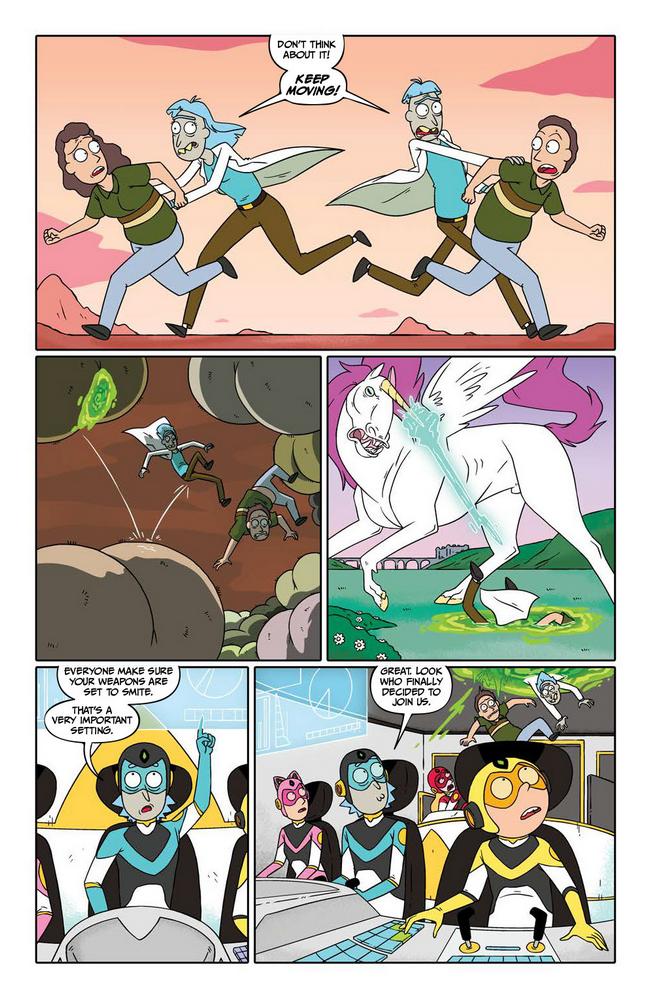 Summer gets a job in retail. I’m sure most everyone can guess what she is about to go through… but luckily she can cheat at the end of the night, by deploying the Meeseeks, a race of creatures made to perform simple tasks, then disappear. Unfortunately, things don’t go that simply.

“Rick and Jerry in: Superior Posterior”

He finds a universe where he is revered!

Rick quickly takes that glory away.

What else is new, eh? Haha.

All in all, a great adventure where we see Jerry get his comeuppance… sort of. It’s the wrong one. But at least there’s a happy ending in there, even if Jerry doesn’t get respect for long (when does he ever? Honestly…). The short comics were awesome as well. I especially liked “Summer Job” because I can relate.

When is Rick and Morty not good? Never!!