Rick and Morty Volume 6: More Comics for Your Face!

Based on the television cartoon series created by Dan Harmon and Justin Roiland.

But while Harmon and Roiland create Season Four, we are given yet another volume of comics to drool over. From a Science Gollum giving his life to Jerry thinking he’s the next Hitler (wait… what?!), this is the madness of “Rick and Morty Volume Six.”

“Close Rick-counters of the Drippy Kind”

Socially awkward aliens from somewhere in all that space want to take over Earth. The president calls on Rick, but in order to get out of chores, Jerry volunteers, and ends up yelling at the creatures, who deem that everything of Jerry’s, is now their’s. Meanwhile, Rick makes a purple Science Gollum for Morty to prove what real science is, and to clean up his mess. Exciting stuff right? Now let’s get back to the boring alien invasion. The aliens take Beth… because she belongs to big mouth Jerry. Needless to say, now Rick gets involved, along with his main sidekick Morty, and Drippy Boy, AKA, that Science Gollum I mentioned earlier. Sure, Beth is saved, the alien ships are destroyed, and the main person to thank is… Drippy Boy? Fully aware of his creation and that his life had no meaning - you can thank Rick for that - Drippy Boy sacrifices himself, as long as everyone lives their days to the fullest. 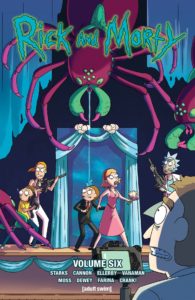 Just when I started to like that awkward pile of purple goop….

“Some Morty to Love”

Fully bearded, for some reason, Morty is back on Earth along with Rick and an alien princess and his main priority is to ask Jessica to the dance… the day of said dance. Of course he’s told no. Did you expect anything else? But hey! The alien princess would love to go to this dance with you Morty! But, aw geez, Jessica comes back to tell you her date broke his leg! Now what? Well, luckily for you, your Grandfather has been dabbling with cloning, I mean, he just cloned that pop star Jus… I mean, Buster Jiebens. So, of course he’s a spare Morty lying around just for you! Oh… did you think there’s a happy ending? Nah. Buster is actually an alien, and his clone is too. A giant spider releasing millions of tiny ones, which end up killing the real Morty’s date. Yikes. Morty and Morty end up… in bed… together…

Don’t question it, walk away.

But at least Rick had the brains to assassinate the real Buster Jiebens before he could spawn. That’s something, ain’t it?

Jerry believes he can be the next Hitler. I never thought I’d ever write that sentence, let alone the title of this story. Rick has a ray that can scan people and tell you what percentage of their 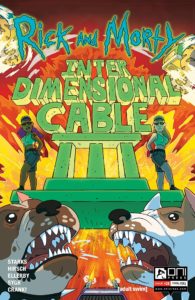 genetic make-up is Hitler-y. Meaning, how likely are they to become the next Hitler? Jerry came in at 47 percent. Not very high, but he thinks it is, and starts to embody the dictator, until Rick comes back from his journey, and puts him back in his place. What journey? Oh just following Morty around as he murdered potential Hitlers in every dimension. Nothing exciting there.

On the run and in hiding, Rick and Morty decide to ignore the news programs and watch some interdimensional cable. We have singers who sound like farts, and the return of “Gazorpazorpfield.” Needless to say, the alien race eventually catch up to them, but can’t really decipher anything apart from each other, so Morty decides to draw the alien symbol on their shirts, cos, you know, that’s how the aliens can tell their own kind?

But hey, at least we got some more Gazorpazorpfield out of it, right? 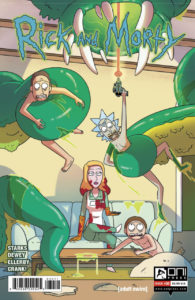 Written by: Kyle Starks
Illustrated and Colored by: Benjamin Dewey
Lettered by: CRANK!

Beth just wants to be acknowledged as a doctor, continue saving horses and come home to an understanding husband. Sadly, she only got one out of three in this comic. The practice where she works was threatened to be shut down, but showing the son of the owner how wonderful horses were by helping a horse give birth, helped save the practice until the police barged in and practically shot everyone in the room.