Today, we revisit River City. We all remember the debacle of River City Sports. Makes me shudder even thinking about it. Despite this, I went in with high hopes… Were my high hopes rewarded?…

River City Ransom: Underground was announced back in 2013, and I have been waiting a long time for this project to come to fruition. So let’s get into it.

In case you never played the original, River City Ransom: Underground is a retro NES beat em’up with some light RPG elements, timeline wise, it takes place a few years after the original. River City Ransom only had 2 heroes you could play as, Alex and Ryan who both had the same moves. RCRU boasts TEN playable heroes, each with their own style and moves. 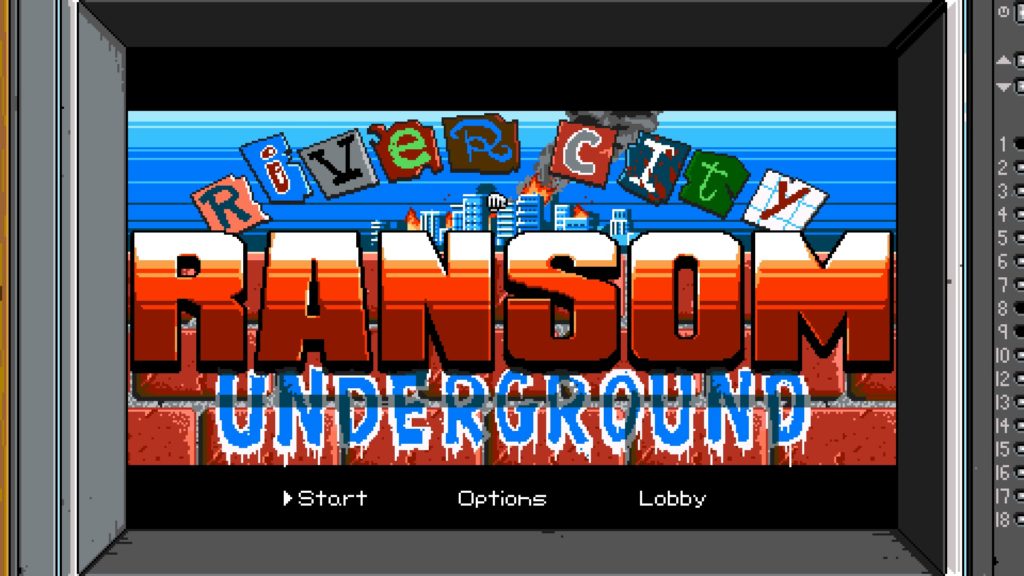 The meat and cheese of the game is the story mode, which I’m going to keep spoiler free, but if you have seen the classic movie The Warriors, you might recognize the fact that your gang is falsely accused of committing an act, and all the rest of the gangs in town have declared war on you and the rest of your gang. A neat feature is that the tutorial is a small remake of the original River City Ransom game, this is a good feature for people who missed the boat on the original game.  In the story mode you can play with up to four players locally, or online through an easy to use interface. I found about 6 different games available for me to join upon my first time running this. Hopefully this number will just increase, and yes, that is Abobo! RCRU boasts lots of retro-goodness! 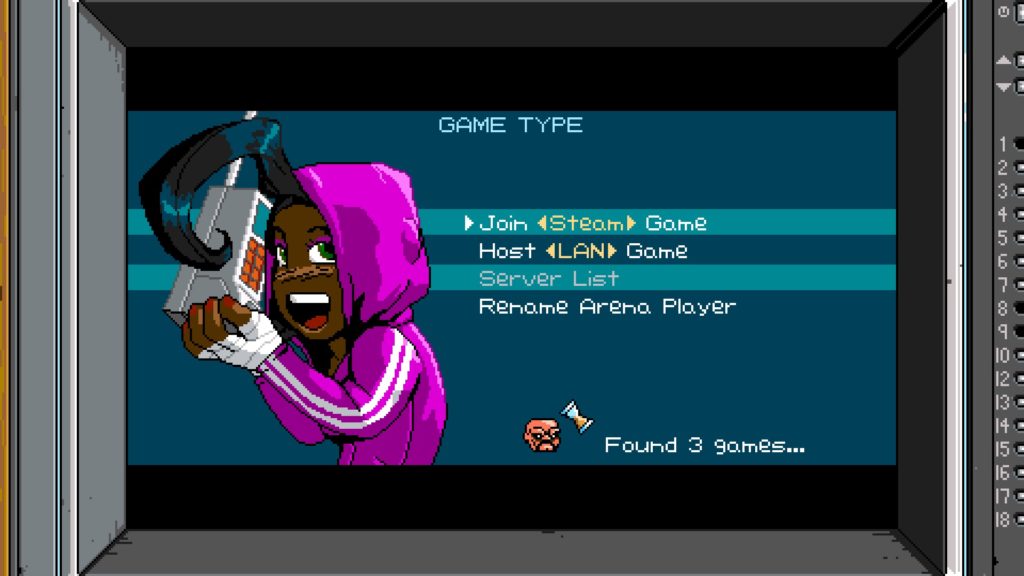 While you are battling through seemingly endless enemies, you will be leveling up your character via an XP system. There are shops where you can purchase food that help boost your stats, like in the original. The graphics are clearly throwback to the 8-bit era, with some modern touches applied. In one scene you are fighting above a subway at an intersection, and all the cars sitting there watching your rumble hum, and move instead of just being stiff inanimate objects. 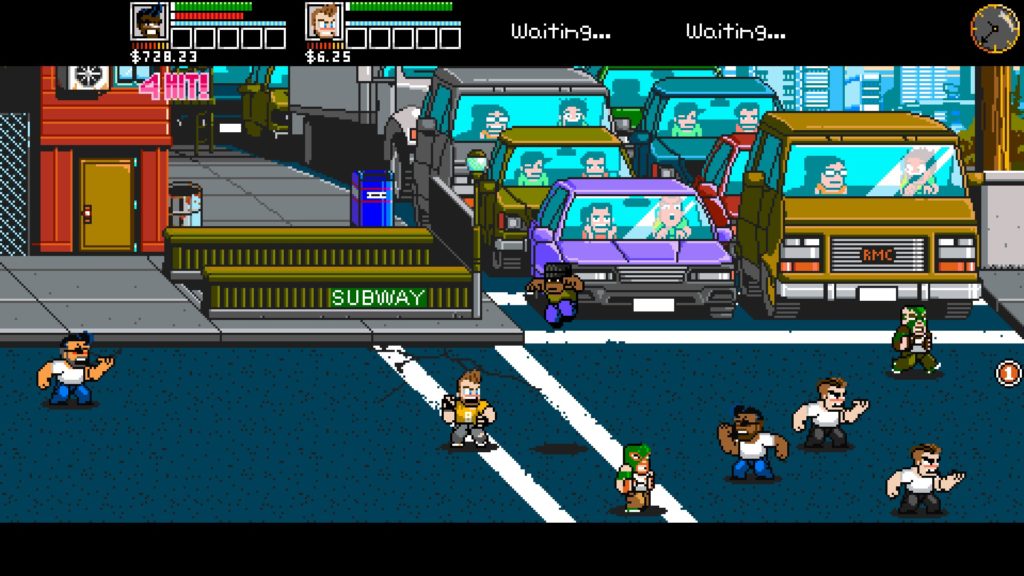 In the following scene, you are fighting in a tunnel, with traffic actually moving this time, where you will notice lots of throwback cars to the 80’s, and maybe even a DeLorean, but my favorite is the woody station wagon that most of us spent time in while we were growing up. 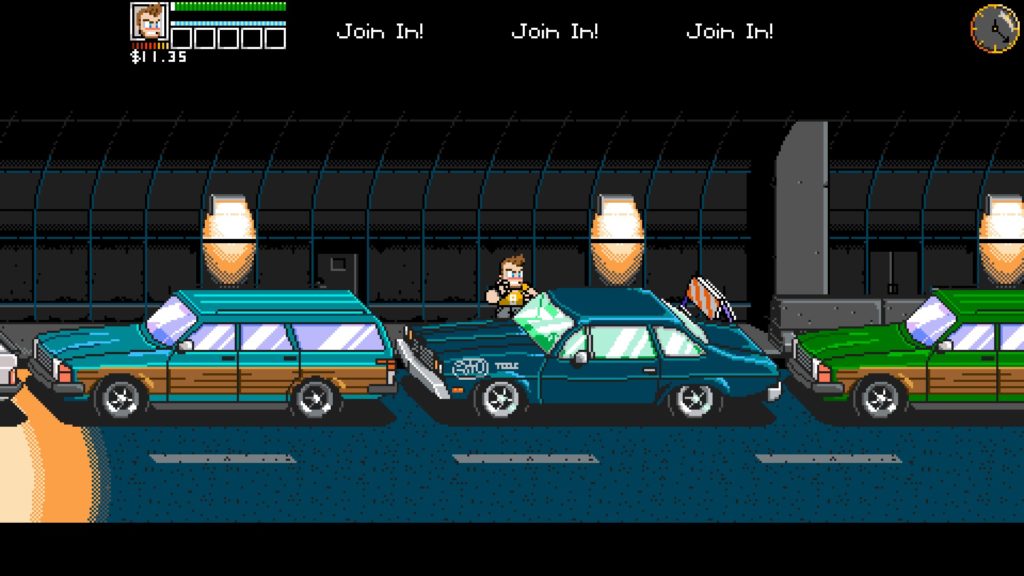 There’s a lot of familiar nostalgia to be found here, and the art team did a phenomenal job with keeping the 8-bit era alive, with a little bit of polish. The music is your standard chiptune music, that fit. I don’t particularly love this type of music, but it fits right in with the game. I would absolutely recommend this game to anyone who enjoys beat-em-up type games, or who were a fan of the original River City Ransom. On Steam it has a sale price of $19.99 which is fair for all the obvious work that went into the game, and for what you get out of it. You’ll be playing this game for a while, you certainly can’t finish it in one sitting. Luckily, unlike the original one, you can save in your headquarters area just by hitting start and selecting the option instead of a wonky password system that drove all of us nuts back in the day. “Is that a lowercase L or a One, or maybe a damn capital I? ARGH!!!” Support this great game, and maybe we won’t be waiting another 30 some years for a followup!

River City Ransom: Underground can be purchased on Steam at: http://store.steampowered.com/app/422810/