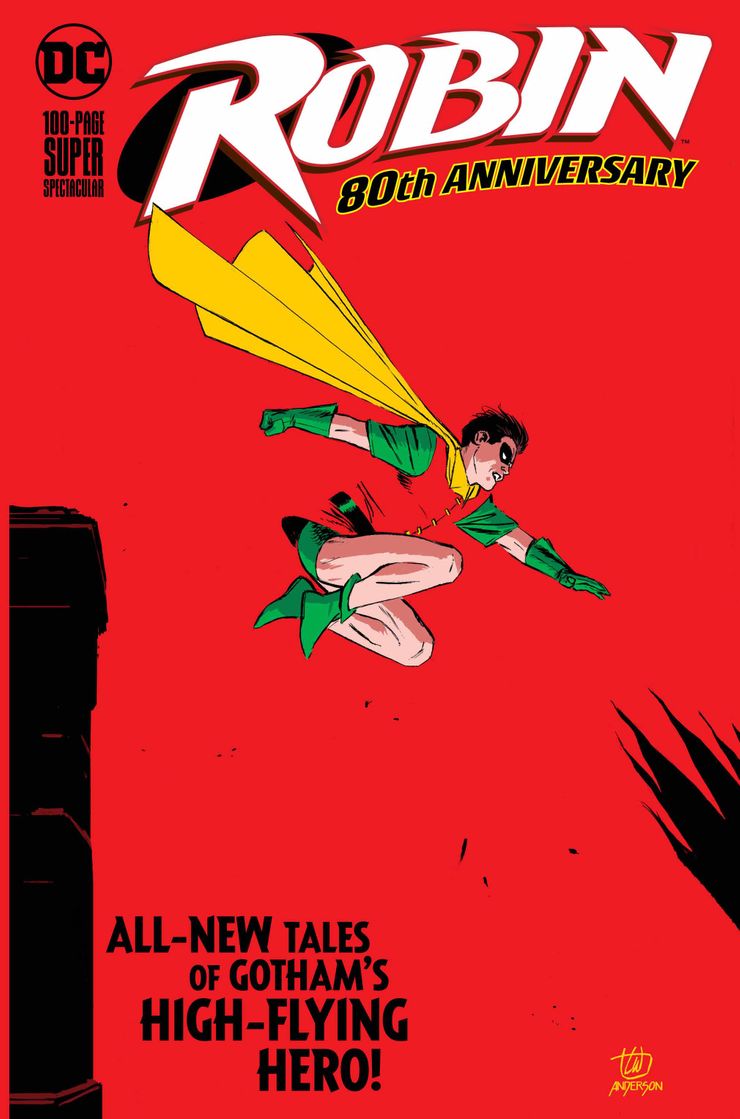 Ten new stories celebrate the legacy and history of the Boy Wonder.

In “A Little Nudge” Batman and Robin reach a crossroads in their relationship and partnership. After taking down both a killer and a squad of jewel thieves, Dick is starting to feel hampered by Bruce’s rules and attitude about their partnership. When the moment arrives, Dick tells Bruce all the things he’s been wanting to about his future, not knowing that the man has been planning this all along. A sweet story that perfectly sums up the difference between Batman and Robin as heroes and Bruce and Dick as people. Great classic art story as well that draws the reader in both in tone and emotion.

Nightwing’s return to Gotham during Cataclysm is featured in “Aftershocks” as an EMT finds herself rescued by the high flying hero after she tries to help a woman trapped in a cab. As Nightwing makes a once in a lifetime catch, he finds his efforts to help hampered by the appearance of thugs looking to loot the ambulance. To make matters worse, the cab is preparing to fall into the river. A fun story filled with thrills and adventure with a sweet and charming ending.

The Titans return in “Team Building” which has an increasingly frustrated Damien Dahrk berating his HIVE troops for another failed battle against the Titans and the loss of several relics the villain planned to use against them. With his plans thwarted at every turn, Dahrk wants answers before he prepares his latest doomsday weapon. Unfortunately for him, his lack of concern for his troops will allow an unknown entity into the HIVE. All of the Titans action is great and I enjoyed the humor in this story.

The Lesson Plan has Dick Grayson in his Agent 37 persona training a new recruit during a mission to retrieve a scientist and a dangerous isotope from the hands of terrorists. As the pair face everything from Atlanteans to Gorillas, Dick recalls the lessons of his mentor Batman and makes a point of giving the exact opposite advice to his charge. Another fun short story that showcases the difference between Dick Grayson and Bruce.

Jason Todd returns in “More Time” with a story that contrasts his time as Robin with the present as Jason fulfills a promise he made to Bruce when he was a kid. An incredibly sweet story that showcases the bond Bruce and Jason have as well as the influence Batman continues to have on his former partner.

Tim Drake takes center stage in “Extra Credit” as the teenager is brought in to meet the new school Guidance Counselor and is told that even with his stellar grades, the career in law enforcement he seeks could stand for the young man to pick up some extracurricular activities. The irony is not lost on Tim as everything the man mentions plays into his night time activities as Robin. A fun story that could have gone a little deeper into who Tim is as a character.

Tim returns in another story, “Boy Wonders”. Older and wiser, the newly minted Red Robin must decide if he is going to take the offer Batman is making to him to lead a new team of heroes. In order to make his decision, he will go to those who wore the mantle before as well as the current heir to the name. After listening to their advice, Tim Drake will realize what sets him apart from the other Robins and why that makes his path a unique one. This story is a reminder of how significant a role Tim Drake plays in the Bat mythos and why his character is so unique and special.

In “Fitting In” Stephanie Brown makes her mark on the mantle as she trains to be the next Robin. Using one of Tim’s old costumes, Stephanie shows that she needs things to change in some significant ways if she is going to work with Batman. She will also have to teach the Dark Knight that she is her own Robin. The story is well done and there are some cute, fun moments to be had, but there was a lack of depth to it that didn’t really add anything to the story of Robin.

The Super Sons return in “My Best Friend”. Jon Kent has a paper to write for school and that paper will be about his best friend Damian Wayne. He recounts how they were brought together, how they fought each other as well as the bad guys and how their friendship evolved over time to a relationship of trust and mutual respect. This short shows how Damian has evolved as a character and how that evolution has made him a more interesting Robin.

“Bat and Mouse” will find father and son clash over ideals as the two reluctantly team up to take down Quietus and his army of robots. Unable to say what they need to say to each other, they let their fists do the talking as their inner monologues speak volumes about the growing rift between them and Damian hides the scope of his latest plan from his father. A good story that should lead to an interesting clash between Batman and Robin.