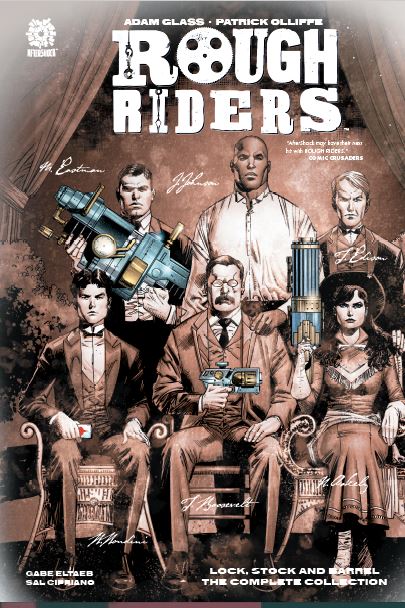 I’ve always been a fan of alternate history when it comes to comics. Watching creators’ work elements of science fiction and fantasy into historic events and the background of famous figures has been a standard in the medium for almost as long as comics have been around. Watchmen worked off of the idea of basing characters in a world where the arrival of superheroes in our world changed the outcome of Vietnam and where the Watergate scandal never happened; leaving Nixon as president in an alternate 1985. President Ronald Regan figured predominately into the events of Frank Miller’s Dark Knight Returns. DC’s All-Star Squadron was based on the idea of superheroes fighting during WWII.

This team of future legends is gathered together by Roosevelt to investigate the mysterious destruction of the U.S.S. Maine, from there the series goes off in so many unexpected directions that readers will have their heads swimming by the end of the story.

Without spoiling the context or the surprise of how these pieces fit together expect to see appearances by evil Russian madman Rasputin, steampunk frontier armor, the taking of San Juan Hill, the earliest known version of Guantanamo Bay, future laser-tech weapons, blimp fighting, oh yeah! I almost forgot to mention the alien invasion. Then there is the assassination of President McKinley, a secret society, William Randolph-Hurst, Niagra Falls, Queen Victoria, Howard Lovecraft, a supernatural cult, zombies, and that’s just the basics.

And let’s not forget that all of this is at the behest of a shadowy council of wealthy families of the day that include such luminaries as Rockefeller, Carnegie, Morgan, and Vanderbilt. It’s this council of elites that direct Roosevelt on his missions as Teddy’s own father was once a member of this secret cabal.

Glass has woven a tapestry inside the framework of our history that is colorful, rich, and as layered as any action-adventure series available on the stands and he did it with a cast that is well known to most school children.

This hardcover collects three separate mini-series together and by the end, readers will be eagerly awaiting a fourth as Glass included a glimpse of other Rough Rider teams through the decades. Future teams that included everyone from Babe Ruth, Steve Jobs, Bruce Lee, Malcolm X, to John Wayne, Neil Armstrong, Elvis, and Marilyn Monroe; with plenty of other historical figures to fill out the ranks.

In today’s current graphic novel market there has become a trend to give fans the bare bones when it comes to content. If you follow the big two formula, you get a single story-arc and couple pages of covers used for the series, maybe a page or two of behind-the-scenes info and that wraps up your $15-20 investment. But here with Rough Riders, you’re getting all three mini-series in full, an extra issue showing future teams, a cover gallery, thumbnails, a breakdown of the cover process, character sketches and a short interview with the creator. A great sum of content for the price point. In short; you’re getting your money’s worth.

Patrick (Pat) Olliffe is no stranger to comic fans, Pat has been a staple of the industry for 25 years and has worked on just about every title or character of note at the big two. Here Olliffe has brought his considerable talents to bear on these historical figures and uses all of his veteran artistry to make the art in this series sing. Unlike most offerings from comic publishers these days, Aftershock had the good sense to maintain the same art team throughout the series and that consistency on the visuals is welcomed! (Thank you!) That consistency allowed this series to feel uniform, and the natural progression of the storylines coincides with Olliffe’s comfort level at drawing this historical cast.

The action and drama move at the proper pace as Glass and Olliffe understand each other’s strengths. Through three mini-series, the hardcover never drags or wanes in the face of such a lengthy read. That in itself is quite the accomplishment. It’s easy to see for any reader that these creators came to this series with a passion and understanding to make the best damn comic they could. They pulled it off!

Olliffe had the unenviable task of taking well known real-world figures and turning them into superheroes. Have you ever wanted to see an alien-possessed Teddy Roosevelt? Well, this is your chance! This twisted version of history is brought to life through Olliffe’s considerable artistic skill and the series will forever be in his debt.

Have you seen this:
THE MITCHELLS VS THE MACHINES (REVIEW)

While Glass and Olliffe made this series a fun ride for readers, they didn’t accomplish this all on their own as colorist Gabe Eltaeb and letterer Sal Cipriano rounded out a team that put their creative stamp on every single panel and page.

Eltaeb never failed to bring a lively palette of colors to the series when the moment called for it and was still able to provide a more muted tone to the scenes that called for a dark and more ominous environment. The sign of a great colorist is being able to switch moods and shifting tones of storytelling without drawing attention to the work that you are doing. Eltaeb’s ability to make each panel “pop” without getting too fancy with the digital brush is a testament to a fine artist. There is a complimentary feeling between the linework and the lighting that only other professionals and fans with a discerning eye will be able to detect and appreciate.

Meanwhile, Cipriano has bolstered the entire series with deft use of sound effects that add to the immersion of the storytelling. While there are a few instances where the modern looking style of text used to denote sound seems to be out of place, it is not enough of a detractor to lessen the enjoyment of the art or break the flow of the story…I’m being a little overly critical in that mere observation, but Cipriano has successfully left his fingerprints on this series; much to the enjoyment of the audience, as he does clutter the page with word balloons, nor hide the artwork. The mark of a true professional.

I wasn’t sure just what to expect when I started reading this series. I knew that dealing with famous names from history is a personal favorite of mine, I was still shocked and surprised at how much I enjoyed this collection and I’m pissed that it was able to survive so long outside my awareness. This is a series that I wish I had been able to read in real-time. There are enough shocks and cliffhangers in this series to satisfy; and yet oddly I kept wanting more. Being introduced to this series and these characters in such a complete way was such a delight. I sincerely hope that there is another installment planned and coming soon. This property and series are just too good to allow to languish for too long.

The group might be called the Rough Riders, but the ride for the reader has never been this smooth.