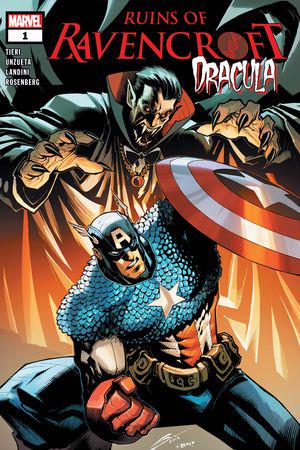 Jonas Ravencroft’s journal has attracted an eclectic group of heroes to the bowels of the institute to uncover more of its dark secrets. After making their way into the area of the sub-basement where monsters were being kept, they find the place empty. When Bucky arrives on the scene, he tells the gathered group about his experience at Ravencroft. An experience that included one of the most dangerous monsters they’ve ever faced.

Everyone from Loki to Sinister has made their way through Ravencroft, but in 1945 Captain America and Bucky infiltrate the institute to find and old friend from the war. As they search for their friend, they find that the building is being used to experiment on the residents with monstrous results. As Cap takes on the lord of the vampires, Bucky must make a painful decision about his friend.

This was a really good story. Frank Tieri mixes mystery, horror, and adventure in a plot that is both entertaining and engaging. The dialogue is great and the story moves at a pace that keeps the immediacy of the action at the forefront. There is a lot of awesome action beats in this story and it is interesting to see Captain America go toe to toe with Dracula. The story works both in the past and the present with Tieri putting one final twist in the story to make it even more intriguing.

Unzueta and Landini provide some beautiful artwork in this issue and the contrasts between the past and present art styles flow seamlessly.