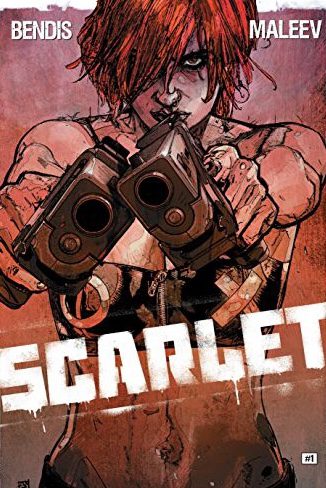 Scarlet is a new 6 issue series from the writers of Superman and Kabuki. The opening text sets the tone with the backstory of the main protagonist, Scarlet. Her and boyfriend Gabriel’s lives were ruined by a crooked detective, killing Gabriel and leaving Scarlet left for dead. Leading a campaign against Portlands corrupt police force, she films everything she witnesses and uploads it all online for the world to see. As the growing support of her campaign increases and a violent protest ensues, the Police eventually shut down the city. Blowing the bridges and leaving them the residents trapped.

Issue one is mainly used to set up the tone of the world we are in and sees two Portland residents fighting back against the police. Attempting to recover a package that has an ‘S’ symbol printed on it, the opening pages waste no time in drawing you into the revolution. Its art is dark and suitably matches the anarchy that we’ve are introduced to. It’s apparent the world in Portland is still very much a violent protest and shows no signs of the resistance. Scarlet is introduced through her own dialogue depicting how America has always been broken. From being built upon slaves to Congress, it’s something that’s very relatable and correlates with the medias current events. Alex Maleev’s art here is ideal for this setting and I personally loved the art on Portlands architecture during Scarlett’s introduction. They say a picture tells a thousand words which is true but it’s even better when art and dialogue are so perfectly matched like it is here. This is what makes the best of graphic novels work in my personal opinion. The understanding between both writer and artist. And it is what made me enjoy reading this issue.

As the issue progresses we are introduced to a few of Scarlets ‘soldiers’ but the main focus is the drive and motivation in why she’s here. It doesn’t feel like it’s isolating the world at least by doing so it’s actually more of a brilliant way to hear about the world from Scarlet herself.  The issue closes with a surprise attack on the revolutionaries and a mysterious phone call…

It’s not something entirely new in its concept but I am however intrigued to see where this is going moving into issue 2. I love the writing and it’s art but issue 2 will need to have something I’ve not seen before or will fall into the trap of becoming very similar to most apocalyptic titles.