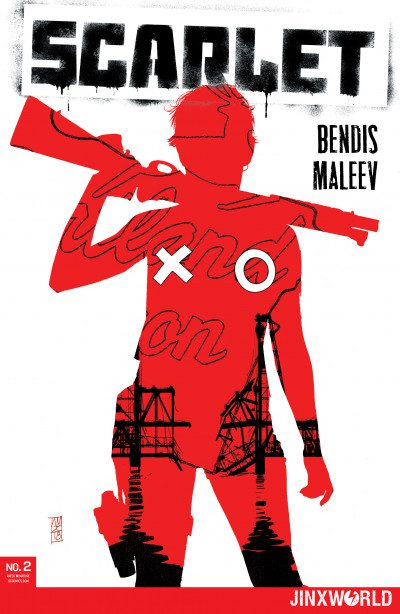 Scarlet and her revolutionaries return to fight back against the Portland police in issue 2 of Bendis and Maleevs brilliant new series. Issue one had seen our heroine lead a resistance against the police who had closed off the city after an attack killing Scarlet’s boyfriend. The bridges to escape were blown, the city is being watched and issue one left Scarlet taking a call from the President. Can Scarlet stay focused and lead them to victory? Or will be she be forced to wave the white flag by the White House?

The issue opens up with an explosive flashback to 3 weeks before the events of issue 1. Police are seen ferociously attacking the city in a flash of orange hues across the panels and exclaiming “focus on the redhead!” It’s made clear throughout the issue that Scarlet is the main reason that the city is being watched. Scarlet is the voice of the people and as seen midway through the issue she will stand up for those who need it. It effortlessly reflects our recent political circumstances and those currently standing up against what’s right. The story cuts back to the end of issue one with the orange colors fading away back to its usual grey tones. The use of color is used tremendously to reflect emotion throughout the series and is one of its highlights for me to read. Alex Maleev’s art is a perfect fit for the story unraveling.

Scarlet learns from the call that she’s being watched and things take an aggressive turn as she makes her point that she isnt giving up the fight. The man sent to pass the call is a doppelgänger of her murdered boyfriend Gabriel. It’s a clever set of panels and text here that left me feeling: is Scarlet still in control? Or is she being paranoid? The following 3 pages corroborated my thoughts as are completely void of text. Distraught from recounting time with her murdered boyfriend, a set of 3 panels, one orange, one red and one grey cover page 14. This shows how Scarlett’s mental state without the use of any text. By page 16 it all hits home for her and a ray of orange and red from the previous panels shine on scarlet like a ray of light. This is brilliantly achieved and my favorite part of the issue. To purvey the emotions involved without text in such a way was remarkably done here.

This series is deep in its thoughts and in making the reader aware of the world we are in and those amongst us who stand for what’s right. I was worried issue 2 wouldn’t deliver the same brilliance as issue 1. I was wrong. Both its art and story and what it is highlighting has continued to impress. I eagerly await Scarlet and her revolutionaries in issue 3.