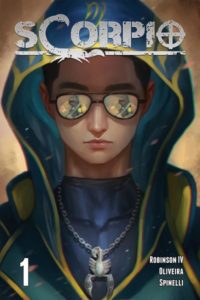 Due to the recent start of crowdfunding for issue two if the Scorpio series we thought that it would be a good idea to take a look back at issue one. Thankfully, writer and series creator John Robinson was able to help us out. The Scorpio series is planned to be a long-running story with a number of players yet to be introduced to the audience.

Robinson explained “Scorpio is a diverse urban fantasy comic that focuses on 12 relics that are empowered by the Zodiac. It features all of the signs, and will cover a vast cast of characters.” So the comic sounds like its created in the same vein as what Top Cow has done in their universe with various artifacts granting normal people amazing abilities.

Looking at issue one it’s easy to see that Robinson is playing this story slowly. The writer is taking the time to establish his characters before diving headlong into his mythology….or astrology in this case. The focus of the first issue is Daniel Shim, a 26-year-old Asian-American tech genius who is on the verge of launching a new proprietary idea that will turn your home into a smart home. The projections of his new venture look to be huge, his friends and co-workers love him, his girlfriend loves him, his OTHER girlfriend/mistress loves him, his siblings begrudgingly love him. Life has been good to Daniel. Even after the passing of his parents and leaving him to be the head of the household, Daniel has thrived.

That all ends as a group of intruders break in looking for a Scorpio themed box. It’s contents left a mystery as we learn that Daniel’s father was a devotee to the symbology and mystery surrounding the Zodiac. A belief that he tried to pass on to his son before he died. Now Daniel and his family are being held hostage as the sacred box is now in the hands of intruders.

Robinson’s storytelling is dense. The opening sales pitch at the beginning of the issue goes into great detail describing Daniel’s tech. Robinson goes out of his way to show how admired and appreciated Daniel is by the surrounding cast. The message is clear, you are supposed to like this guy. In a medium where readers are used to the idea of the C.E.O. playboy, this isn’t new ground. Characters like Tony Stark, Bruce Wayne, and others have trained readers to accept the concept of the well-to-do businessman with a heart of gold. The entire issue is an introduction to Daniel and it’s only towards the end of the issue that we begin to delve into what the series is about…but the moment that you feel that you might begin to get an explanation about any of the mysterious elements of the story (The Zodiac, the Scorpio box, the intruders that are threatening to cut Daniel’s throat) the issue is over.

I can understand that a creator who is crowdfunding their work might want to pack a little too much into their book. You never know if there will be another issue, but Robinson has done the opposite here. The writer takes us right to the edge of intrigue and leaves us there. Forever waiting for the payoff. While I appreciate a good cliffhanger as much as the next comic fan, this felt like a really poor place to leave the audience. While the build-up in the drama is there, it lacks the hook to really NEED to continue with the story. Now I could be getting ready to eat my words as funding for issue two is now going. Maybe in the next installment, all of this becomes clear.

As for the visuals on the book. Oliveira was tasked with depicting a large cast of characters in this first story. A tough job for any artist. The action sequence towards the end was well drawn and flowed nicely. It was easy to see that Cezar was more comfortable drawing the action than illustrating the daily life of Daniel.

Cezar made some interesting choices when it came to angles on panels. There were multiple times that the visual layout of a page was disrupted by unnecessary tilts, down shots, and ground POV. One page, in particular, had a panel of Daniel walking down a corridor, and to show this Oliveira drew Daniel sideways.

There were multiple times that I spotted anatomy that was off and made the characters and their poses look stiff and wooden. Page layouts were crowded at times as the story called for a lot of information to be conveyed in a small space. This comic I believe would have benefited from adding a couple of extra pages and stretching the sequences out or cut some unnecessary scenes altogether to make it a more streamlined book.

There are also some issues with colors and letters. The word balloons at the start of the comic are filled to bursting with text. There is an overabundance of captions on the first page. I know that I’m nit-picking, but things like having the sound effects the same color as the object that they are conveying sound for makes the letterer’s work almost invisible.

The real problem this issue has is the lighting. Spinelli has real trouble with light. Not just one or two spots but anytime there is an overhead light source she felt compelled to wash out panels in a yellow-white haze to denote the light source. She did find when it came to coloring the characters, but the lighting obviously gave her fits and it detracts from the artwork.

This is a comic by multiple new creators in the industry. They are going to have their growing pains. That is just part of the process. With some time and some more projects/issues under their belts, these creators will find their way in the industry. The real promise here is the concept itself. It’s strong and thought-provoking. If Robinson can find a way to successfully build on this foundation of the Zodiac and all the symbols…well this could be a series that mainstream publishers might be interested in. But for right now the creative team is working on getting their feet underneath them and working together.

As funding takes shape for issue two I’m interested in seeing what this team has to offer next and how they grow and progress. You can do your part to make sure that issue two finds its way into production by going to Kickstarter and searching for Scorpio or just click HERE and let us take you right to the project’s page.