I never thought that I would enjoy a game that (mostly) plays itself, yet here I am writing a review for a mobile title by the name of 7 Knights. This is a game that logically shouldn’t work and yet, strangely, it does. So what is 7 Knights? An incredibly popular game over in the Korean mobile scene, that’s been translated and released in the NA market. It’s a f2p “gatcha” style light RPG from the Korean studio NetMarble. Gatcha refers to prize machines that are popular in Asia. Most similar to the little prize dispensers we often see in supermarkets here in the US. You put in a little money and out comes a random prize. 7k takes this mechanic and applies it to your gaming party. Throughout the course of the game, you’re constantly randomly winning/receiving characters which you can use in your party of 5. Each of these characters have different types (Tank, Healer, Brawler, Magician, etc), stats, abilities, and different applications. Each character also has a rating from 1 to 6 stars. As you can guess, each increase in star rank is a massive increase in strength and the higher ranks are much rarer than the lower ones. 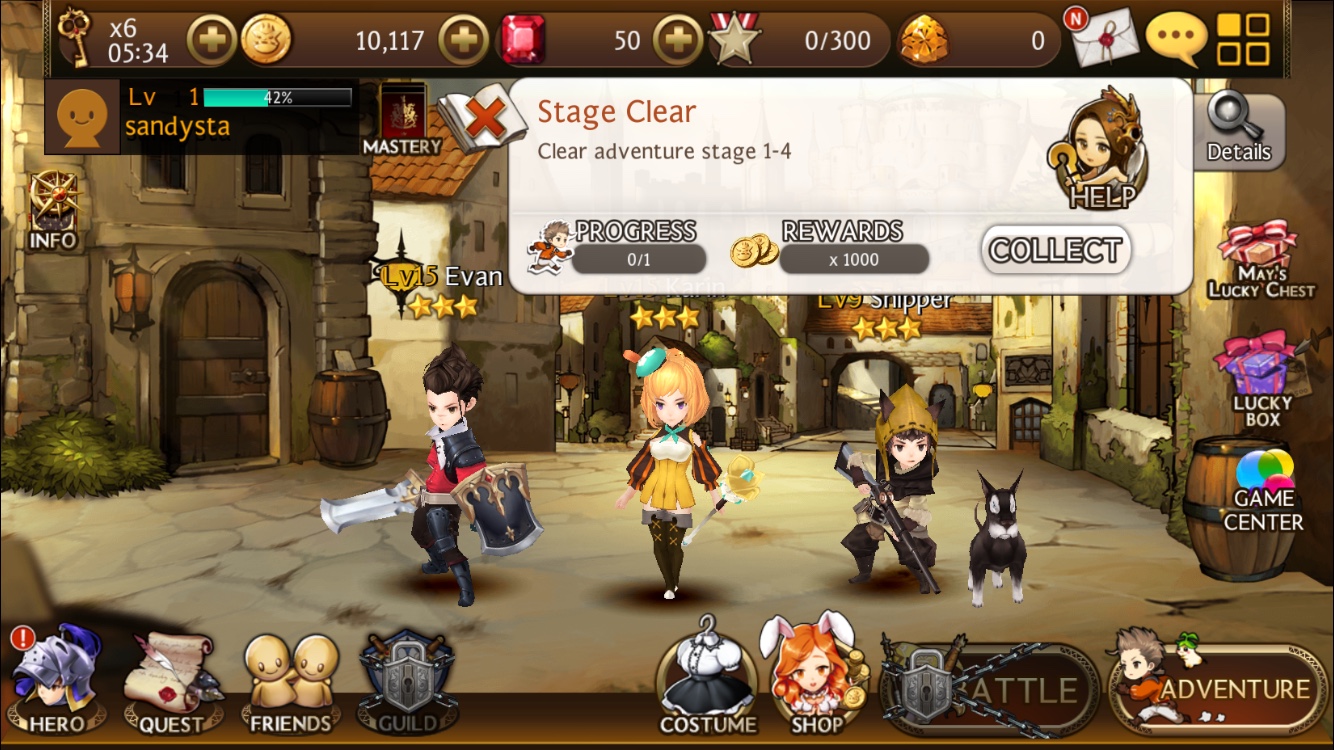 Your starting party isn’t strong but that quickly changes!

Don’t worry though, the game gives you plenty of options to acquire the rarer and more sought out characters either by fusing two different heroes or using special elements to rank up your 3 star to a 4 star and so on. Part of the fun is in trying to acquire these rare and sought after characters. There is a huge element of RNG in this game which some people might find frustrating, but overall the game constantly gives you chances to get something cool.

So how does the game play? There are multiple modes that get unlocked as you progress, but a massive chunk of your time will be spent in adventure mode. Adventure mode consists of small stages which each take between 1-4 minutes to complete based on difficulty. It plays out like a standard RPG fight. Your team fights some monsters except you have no control over your party, the only thing you can choose is when each character uses their abilities (everyone gets 2). I realize that on paper this seems terrible, boring, and shallow but it’s not. Let me elaborate, first off, there are items to equip on each of your characters which can be upgraded, the formation of your party can also be changed and upgraded. Lastly, the timing of when abilities are used can significantly impact the course of the fight; especially in the harder stages. Overall though, because you don’t have direct control of your party it adds an element of luck and tension to each stage. Remember, each stage itself is typically finished in 3 minutes or less. As such, if you win, you feel like you accomplished something and if you lose, it’s not that difficult or time consuming to try again. This is the crux of why the game works. You can get in a quick battle while you’re in the bathroom, waiting for the elevator, or sneak one in during a boring meeting at work and get a little jolt of satisfaction.

Typical fight. Choosing when to execute abilities is the only thing you control!

Have you seen this:
Impressions: G.I. Joe: Operation Blackout on Switch

As you progress in the game, additional modes are unlocked along with guilds to join. These additional modes add minor twists to the formula. The one I found myself most surprised at enjoying was Arena. In this mode, you’re fighting the party of another player but unlike Adventure Mode, you have NO control over your characters. Yet, it’s still enjoyable! The closest comparison I can think of is if you bred a horse that you then sent off to the races. It’s YOUR horse so you want it to win but you can’t control what actually happens. So instead you carefully select your team, try to get them the best gear, upgrade their formation, cross your fingers and hope for the best! Due to the short nature of most fights it works! 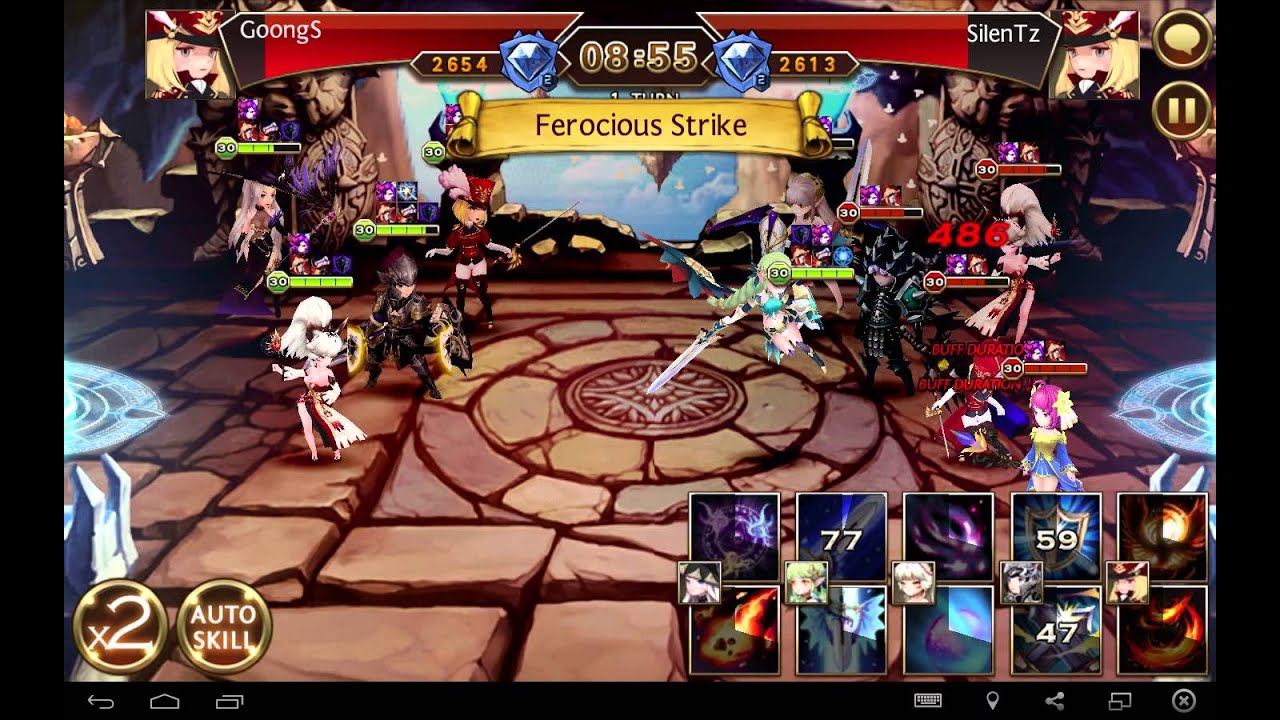 Ah the Arena, you will find yourself yelling at your team here…

Let’s take a second to talk about some of the other aspects of the game. It’s done in a 2.5D anime style. The characters are colorful, well designed, and bursting with personality. Every animation from idle, to attacking, to special attacks are smooth and beautifully executed. The enemies are well done as well. The music, voice acting, and story found within Adventure Mode are all serviceable but nothing special. To be fair, you won’t really be playing the game for these things but they don’t detract. Lastly, it’s also important to note that this game is constantly getting updated with new characters and features; the most recent of which being guild wars!

The Grind is Real But Manageable

Eagle eyed readers will have noticed that I did mention that this was a f2p game at the beginning of the article. As is typical in f2p games, there are micro-transactions, and when first loading up the game you’re presented with a bevy of offers that need to be declined. Don’t let that dissuade you from playing this game though. 7 Knights is very generous with it’s in-game currency of rubies. You’re constantly being rewarded for playing the game. There are two different categories of quests and every action you take is tracked and brings you closer to a reward. Having said that, I will be the first to admit that as you approach your 2nd and 3rd week of play, you are forced to do some grinding. Usually for gold but also for rubies (which can be earned in-game and not just bought.) This is because it’s more expensive/time consuming to improve characters past 4 star rank (but the benefits are worth it!)

Despite this, I wasn’t too put off by the grinding. Mostly due to the fact that it’s easy to farm a level and let your party do it’s thing without needing to do anything except prompting them rerun the stage. Again, this may turn off some people. The game is best enjoyed casually in bursts. It’s incredibly fun to play a game where it feels like the next reward is just around the corner. For a f2p game to give me literally over 30 hours of fun, over the course of a few weeks without me having to spend a dime, is a very impressive feat! I urge you all to give this game a shot, you have nothing to lose!