It’s shaping up to be a big week for announcements and we just got another really good one.

According to Deadline, Warner Brothers has announced that Robert Downey Jr (Avengers Infinity War) and Jude Law (Fantastic Beasts The Crimes of Grindelwold) will return as Sherlock Holmes and Dr John Watson for a third film in the series. 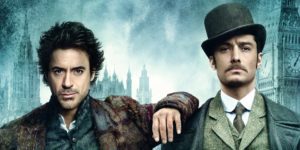 Narcos co-creator Chris Brancato has been brought on to write the script with Joel Silver returning to executive produce the feature. No word yet on whether director Guy Ritchie will return to helm the third film after directing the first two.

The first two Holmes films have brought in over $1 billion dollars worldwide and Warner Brothers has scheduled the third film in the franchise to be released December 25, 2020 putting it opposite Avatar 2 and the upcoming sequel to the animated feature Sing.

Have you seen this:
Former Darth Maul writer has an idea for the sith if Disney uses him in Star Wars show, movie
jude law robert downey jr sherlock holmes