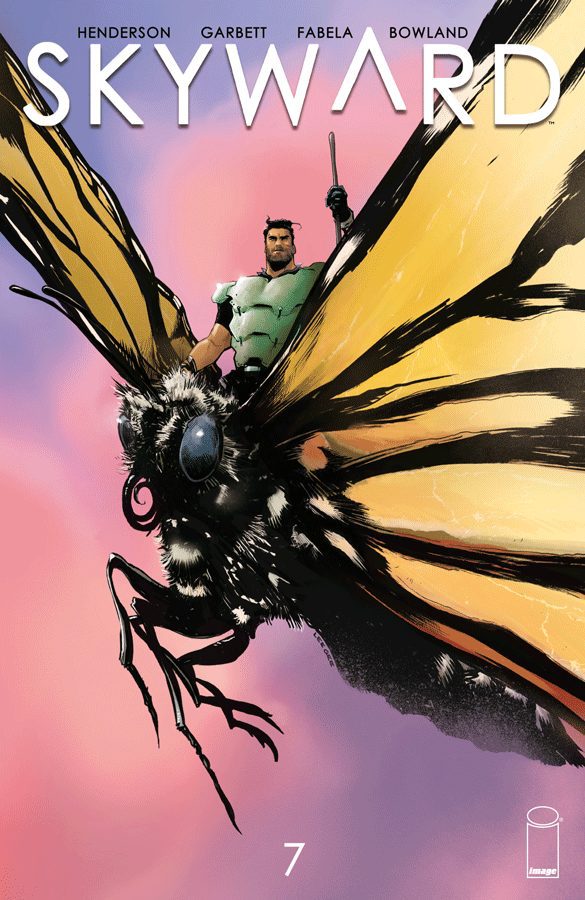 Skyward is a gorgeous series. Lee Garbett and Antonio Fabela continue to outdo themselves in each issue. Issue #7 is no exception as Garbett and Fabela capture the terrifying beauty of a world in which gravity no longer exists. The crux of this horrific beauty in this issue is all the giant bugs which populate the forest where Willa and Edison find themselves trapped.

After throwing herself from safety to save a stranger, Willa must use all of her wits and ingenuity to avoid becoming Dragonfly food. This allows for some truly remarkable panels as Willa maneuvers herself around the forest using the lack of gravity to perform remarkably athletic feats–all of which Garbett captures beautifully. In short, Willa looks like a superhero while flying around and saving someone in need.

The narrative driving Willa’s decision to save the stranger is as beautiful as the art showcasing it. The man in danger has a young girl and this parallels Willa’s own life in which she recently lost her father. As such, she cannot stand by and let the man die. So she jumps to the rescue and it is stirring to see her moved to action by her own trauma. It is wonderful to know that though the scenes change, Willa remains wonderfully the same.

Beyond this, the issue also introduces a dreamy stranger with a big sword and if Edison’s jealousy at his appearance is any indication, we might be in for many more appearances from Mr. Dreamy (actually known as Lucas Serrano, but that’s way less fun). Though Lucas saves Willa and the rest of the passengers trapped in the forest, it is clear that he is not fully forthcoming with who he is and what he and his crew do. This sense of mystery and intrigue suggests that even though Willa and Edison have escaped the frying pan of the forest full of carnivorous dragonflies and mosquitoes, they may be about to head into the fire of Lucas and his team’s base.

The final page of the comic hints further that despite Lucas’s dreamy looks and heroic acts, he may not be entirely trustworthy. I cannot wait to see how his story arc intersects with Willa and Edison’s arc.

Ultimately, this is a strong issue and a good reminder of all the possibilities for the series going forward. Now is as good a time as any for new readers to catch up and follow along with Willa’s adventures.