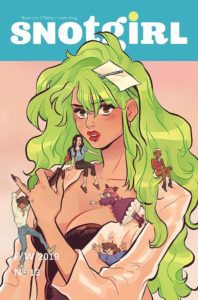 I may as well be a fan of fashion icon “Lottie,” because I’m obsessed with her escapades in “Snotgirl.” Admittedly, I am two stories behind so I’ve been introduced to a plotline mid-stream in Snotgirl #13. Lottie’s sister is in town, messing up her sleep as well as screwing with Meg’s 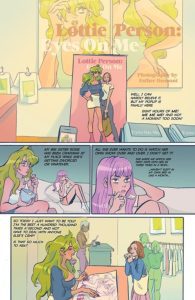 glamorous dreams for her own wedding, and Cool Girl is plotting something… new. AND, now Lottie’s ex, Sunny, is obsessing over Cool Girl’s cousin. I wonder what secrets he is hiding? I don’t know, but I’m anxious to find out in the next upcoming issues!

In my previous reviews of Snotgirl, I don’t think I’ve ever commented on how unique the coloring is for this series. The coloring always impresses me as it’s not over the top, and takes advantage of using pastel versions of every color you can think of. It evokes an unwelcome calm that just parallels the underlying mystery following Lottie and everyone around her. It really is something wonderful.

I was left confused in this issue, but that’s partly my fault as this issue is midway through another plot line that I am behind on, but other than that, the Snotgirl series is as interesting and strong as ever.

Image SNOTGIRL
Add your voice!Join the conversation on Discord...
Join Our Discord