Something for the Fans in Titans #8 Review 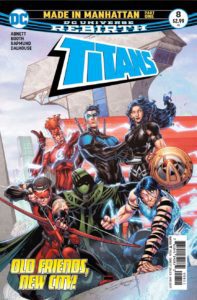 Last issue, Abnett provided a great bridge between story arcs and told a number of smaller personal narratives that helped readers connect with the title.  Our review of #7 was solid and it was an easy starting point for any new reader. Issue #8 is the opposite of welcoming to new readers, but has a number of hooks for longtime Titans fans. Abnett has shown with his work on Titans Hunt and this series, that he is comfortable with classic Teen Titan lore and this issue relays on that lore to hook readers into this new arc.

The characters of Mal Duncan and wife Karen Beecher-Duncan take center stage in this issue. Both Mal and Karen were once Teen Titans. Karen and Mal had panels dedicated to their story line during the first seven issues, but now they are in New York where the Titans have made their new home. This brings the current and once former Titans teammates together. By the end of the issue, Karen is once again Bumblebee but she and Mal have unknowingly collaborated with the Fearsome Five. The Fearsome Five, like Mal Duncan, tie back to the early 1980’s Teen Titans. Marv Wolfman and George Perez created the Fearsome Five and the evil team’s reintroduction here is another example, like Kadabra from the last arc, of Abnett pulling back catalog villains into this new series.

If the last paragraph brought back any memories, then Titans #8 will be an enjoyable read. If the last paragraph contains no pings of nostalgia, then this issue has little to offer. There is some continued character development between team mates. Roy Harper and Donna Troy continue growing closer. Wally West shares his frustrations with losing his past to Dick Grayson. 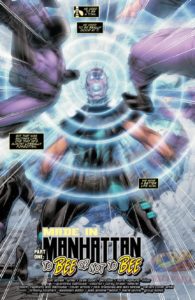 This interaction with Wally and Dick results in some artistic inconsistencies for Brett Booth. Grayson and West without masks are depicted with rounder, less toned faces than Booth’s depictions during the first arc. Even with this inconsistency, the fact that these character design changes are noticeable is a testament to how consistent a visual tone Booth has created. After not drawing issue #7, Brett Booth is back with his muscular character depictions. Booth’s work set a strong tone for the first story arc and that tone mainly continues here. His panel layout conveys energy and his action scenes remain a highlight. It is Booth’s depictions of quieter moments with the team that provide the few artistic inconsistencies in his run.

Abnett’s focus on historic characters makes this issue one for the longtime fans. Booth’s inconsistent art breaks the visual language developed over the first six issues. While readers that fondly remember the “good ol’ days” of  the Teen Titans will welcome this issue, casual fans can safely skip this beginning of a new story arc.