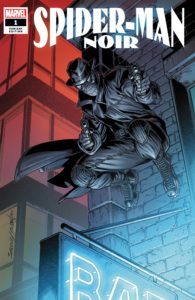 Huh. You know, I like how Spider-Man was full of sarcasm, and such a fan-boy, but I never thought to picture Peter Parker as a detective back in the day, more brooding than boy scout. And yet, here we are! Spider-Man Noir, in all it’s bleak and dreary colors.

Now I know nothing about the alternate Universe Spidermen. I can gleam some of them from what I’ve seen of “Into the Spiderverse.” I’m still shaking my head at Spider-Ham. It’s a real thing, with a real stint of comics. Then there’s Spider-Gwen, where instead of Gwen Stacey dying, Peter dies, and Gwen becomes Spider…, er, Gwen.

Onto Spider-Noir! A quick talking, no-nonsense detective you’d find in the old black and white detective films/ televised serials… and a penchant for eating eggs, apparently. Everyone has their quirks. Like me drinking more coffee than I probably should. Quirky quirks.

Does anyone remember the film “Pleasantville?”, coincidentally starring Toby Maguire (of Spider-Man fame). He gets transported from his colorful modern world, into a 1950’s esque, black and white world where things were wholesome. This is how I felt when reading Spider-Man Noir. I went from the colorful, modern world of our Peter Parker, to the darker colored, 1950’s esque world of Spider-Man Noir. Things aren’t quite as wholesome, but Peter shows some remarkable manners, so… that’s pretty wholesome.

The story also appears to parallel those old films where this mystery is surrounding a brooch of a cicada. There’s always some sort of mystical brooch in the form of a beetle that leads to a much bigger plot, right? I’m looking forward to seeing what this big mystery is, seeing as the hero can swing from webs, and is, well, a superhero!

Art. Yes, my favorite subject. The art is wonderful. I love it when superhero comics stray from the typical sleak and highly detailed art style that so many comics adopt today. The art style is very blended. What do I mean by that? Well, take some colors, and blend them together. It’s soft in appearance, and nothing is too sharp. It’s refreshing and complements the gloomy atmosphere, as if the panels themselves were covered in clouds or fog.

I was highly surprised at this alternate universe story line. It was a tad slow going, but I was never truly a fan of these sort of detective dramas myself. :High-waisted, fast-talking detectiv” movies aren’t my style, but Spider-Man Noir… it ain’t have bad, kid.

Marvel noir spider-Man
Add your voice!Join the conversation on Discord...
Join Our Discord