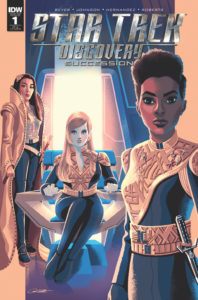 DISCO fans rejoice!! While we have to wait almost a year for season two of the first Star Trek series in over a decade we have the start of this new series coming to us from IDW. Showcasing events that started with the second half of the premiere season, we see what’s happening to the Terran Empire following the fall of Emperor Georgiou and the destruction of the Charon by the crew of the Discovery.

Anytime there has been a plotline in the different series concerning the Mirror Universe it has always been gritty and full of darkness that is the polar opposite of what we usually see. Issue 1 here definitely brings that tone and edge in a very strong way. The development of the characters based on what was shown on the show has taken a sharper edge. The artwork was spectacular in its richness and detail, especially with the non-human characters (L’rell’s closeup in particular).

With an intriguing arc and gripping action just from the first issue, this series looks like it’s going to take off and rocket us through the time between seasons of Discovery. Put this one on your pull list now!