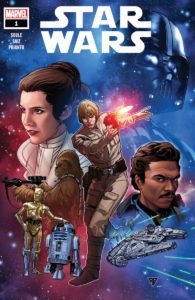 In the aftermath of the escape from Bespin, Luke questions everything and Leia discovers the Empire has a new tool to stop the Rebellion.

Luke Skywalker is haunted by the loss of his hand and the revelation that Darth Vader is his father as the Millennium Falcon speeds away from Bespin. At the same time, Leia, Chewie, and Lando argue over what their next move should be. Chewie and Lando argue over how they lost Han going after Luke in the first place and how they are going to find him when Leia takes command and decides to take the Falcon back to the Rebel Fleet.

The fleet finds itself in trouble as an Imperial blockade has them trapped between a star and an Imperial blockade that is picking them off, ship by ship. Luke, Leia and the rest of the crew of the Falcon will have to put themselves in the middle of the action if there is any chance to get the fleet to safety.

Charles Soule picks up the story right after one of the most iconic moments in the Skywalker saga. The story is tight and flows naturally as the character’s emotions are still raw after recent events and Soule picks up on those emotions with the exchanges between Leia, Chewie, and Lando. There is tension in this plot and the writing keeps the tone of Empire as things get darker for the rebels and Luke questions both what he’s been told and who he can trust.

Jesus Saiz delivers some beautiful art in this issue. The space battles look amazing and all of the visual moments with Luke reliving the loss of his hand are rendered brilliantly.