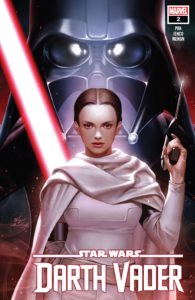 Darth Vader, Dark Lord of the Sith, is what you could call a troubled soul. Slavery, death of his mother, killing innocent Tuskens, intergalactic adventures that shaped him, an influence that turned his soul to the Dark Side. All of this turned him into the Dark Lord and changed his life forever. However, a changed life doesn’t mean it’s a peaceful life or one that doesn’t haunt you. And he’s always going to be haunted by one person: Padme Amidala, his love and wife, the woman he thought betrayed him and thought died due to his inaction.

In this issue, after Vader’s discovery of whom he thinks to be Padme, they discuss who she really is and what mission she is on. After a small skirmish with some insectoids, they both leave the planet continue their combined quests.

The issue in and of itself was good however the portions with the insectoids they fought seemed to distract from the overall plot. The artwork was done beautifully, especially when you saw the parallel frames with the current pair along with seeing Anakin and Padme in the past. A very interesting series so far and I’m intrigued to see this unfold more.

amidala darth vader
Add your voice!Join the conversation on Discord...
Join Our Discord