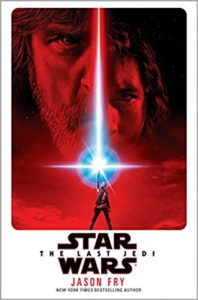 Jason Fry performed an author mind trick with The Last Jedi Novel, linking the minds of readers to the characters they cheered, booed, or didn’t notice from the screen. Only a Sith deals in absolutes, but I can safely say this will not be my last time reading The Last Jedi book.
Padawan readers flock to books because they show a depth of characterization that simply can’t be captured on a movie screen. This journey into the Star War’s saga’s most controversial episode is no exception. The Last Jedi book is a page-turner, with shifting points of view and insight into beloved characters from a galaxy far, far away.

It may surprise Star Wars fans that the novelization of a film they’ve already seen several times can still spoil them. Fair warning: it does. The book’s non-film prologue alone is worth the price of purchase. The first sentence stopped me in my tracks, and I had to read it several times—as well as stop shouting, “Every word of that sentence was wrong, Fry,” at the top of my lungs.

“Luke Skywalker stood in the cooling sands of Tatooine, his wife by his side.”

I nearly dropped my iPad upon reading that. My mind raced. Luke got married? When? And to who? I turned the pages, trusting the Force that I would find a mention of Mara Jade. Instead, the excellently written prologue was one big tease (maybe Fry is a Sith Lord author, after all) showing us a dream Luke had of his life if he had never left Tatooine.

More scenes that never made the film appeared, such as: Rose and Paige before the bombing run, Rey crashing a caretaker party, Poe before flying to attack the Dreadnaught, and a final prologue from the point of view of the Ach-To characters. The latter carried serious implications that Luke’s green lightsaber may still be on Ach-To. Will Rey find it later?

Jason Fry’s previous work in the Star War’s galaxy left me with high expectations for this adaptation. The pacing was brisk, prose never dull, and the dialogue compact and crisp. If I had to pick a single best feature of the novel, it would be the multiple points of view. A wise teacher once told me, “You’re going to find that much of reading depends on our certain point of view”. Fry is a master of shifting the perspective in the narrative, without it feeling confusing or like “head hunting”. The main characters—Rey, Poe, Finn, Luke, etc—all received deep insights and revelations that the movie could not convey through facial expressions or grunting for a scavenger girl to “get off my island.”

One revelation that surprised me the most was that Luke had changed his mind and decided to go back to the Resistance with Rey. I never once suspected that in my three trips to see the movie in theaters. But he went looking for Rey to leave before he discovered her communing with Kylo in her hut. Fry also conveyed Rose’s romantic feelings for Finn better than the film. I loved the sections where Rose stewed in jealousy of Finn’s infatuation with Rey.

But aside from the main cast, the supporting characters also received the spotlight and a chance to tell the story through their eyes, or whatever it is droids have. My favorite example was towards the end when a short section featured C3P0’s point of view of Master Luke’s return, and several sections with BB-8 were fun and entertaining as well. No one notices a droid in the Star Wars galaxy, but I’ll never skip over their sections in a novel again.

I’m not ashamed to admit I shed a few tears when I saw the movie debut in theaters. I thought my eyes would stay dry while reading the book. Much like Ben Solo, I was wrong. The most touching scene in the book wasn’t even in the film. It came with the excellent point of view from Leia in the Falcon’s cockpit with Chewbacca at the close of the story. The film showed them embrace in a hug, but if you want to know what led up to that embrace, for the love of Porgs, pick up this book.

From start to finish, Jason Fry bookended The Last Jedi novel with the Skywalker twins; left alone and left in failure. But still hopeful that twin suns will rise another day. The Resistance hoped for a future, while I just hope for another Star Wars novel by Jason Fry. I can’t wait to see what’s next.

What did you think of The Last Jedi novel? Let me know @JaySandlinWriter
Check me out with @JamesGavsie and @TNPPodcast on @WWWHeroPodcast, where we debate the latest match ups between characters of comic books, SciFi, Fantasy, and more!