8-bit games have been a major rage lately with Minecraft and the like. Gen Xer’s are having flashbacks of their childhood with the games of their youth coming back hard. Sometimes you want to be able to enjoy a nice 8-bit game without having to remember the Konami Code or something hissing at your nearby. The game Staxel by Plukit is a sandbox game in which you start off in a new town where you’re there to help bring up a farm. You meet us with some very colorful characters in the very beginning (especially the Mayor) in which you gets tasks to do. It can be enjoyed solo or bring your friends along.

After taking in some time to play the game, I found it to be a little relaxing. The interactions with the townsfolk was usually quick and drew you into the town step up faster. It did take a bit of a learning curve when it came to figuring out items to find/get. A little trial and error helped though those times. Additionally, there is a really well curated Discord group (accessible from the Discord link on the pause screen) that can help with some more difficult areas. One tip that I found out quickly is to be sure to read the red action words when working on a blueprint. The words are direct clues as to what device to “build” it on. 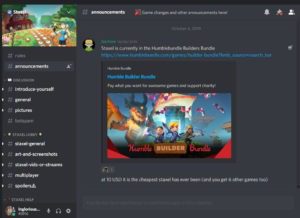 Overall the game has some good merits and a fun, playful attitude. A nice game if you prefer a calm time but somewhat of a challenge as well. Utilize the resources that are available both within the game and on the outside.