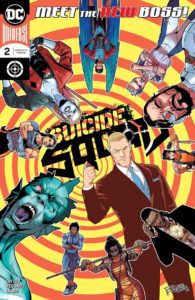 It’s hard to tell what’s more impressive, the start of Suicide Squad #2 or the end. Tom Taylor starts the issue off with a bang — and no one is prepared for it. Even more so, no one is ready for what comes after.

(WARNING: Spoilers for Suicide Squad #2 ahead.)

Well, these new Suicide Squad members really know how to throw down. Especially their leader, Osita. Lok could waste her in two seconds, yet she’s already foiling his plans.

Now, we have an idea of why Osita wants the mission to fall through. She doesn’t like the original Suicide Squad members or Lok. Very fair. They did kill her friends, after all.

But Lok could easily off Osita and everyone else.

Taylor must have a ridiculous plan in store. And there will have to be casualties on both sides. He’s established that no one is safe. Though, it still feels like there’s no way he offs Harley Quinn or Deadshot. (That’s not a challenge. Please don’t go there, Tom.)

But there’s a lot of doubt surrounding those two. Deadshot is dealing with “teammates” that hate him. Lok isn’t a fan of Quinn. They could go in an instant.

Taylor has already created that doubt in two issues. I can only imagine what the ensuing chapters in his Suicide Squad story will be like.