Are you ready for the team-up of a generation? Nintendo and Kellogg’s are showing off their combined powers with the December 11th release of a limited edition Super Mario™ Cereal. That’s right, cereal and video games together again!

“This powered-up partnership with Kellogg’s is another exciting way for us to expand the Nintendo brand in unique and creative ways,” said Tom Prata, Nintendo of America’s Senior Vice President of Strategic Initiatives. “We are always looking for new opportunities to bring smiles to people of all ages, and this is a fun way to kick off the day.”

The Super Mario™ Cereal not only looks to be delicious (really, who doesn’t like marshmallows?) but will also feature Amiibo functionality! For those that are playing Super Mario Odyssey, the box itself will act as a functional Amiibo that will gift the player gold coins or hearts within the game.

“We are thrilled to pack so much fun into one box of cereal,” said Brad Schwan, Senior Director of Morning Foods Marketing. “The package adds value and excitement for fans, with marshmallow shapes in the cereal inspired by Super Mario power-ups to tie the theme together.”

It’s fun to note that this isn’t the first time that video games and breakfast cereals have joined forces. Let’s take a look at some of the other instances where two of my favorite things have come together. 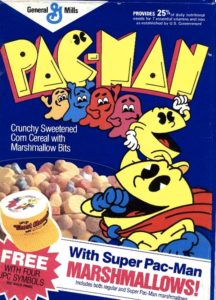 Much like the new Mario cereal, the Pac-Man version also featured marshmallows. The designers at General Mills had it easy as most of the marshmallows are either yellow circles or blob-like ghosts. 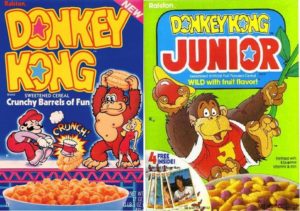 “Crunchy barrels of fun!” If that doesn’t sell you then maybe the fruit in the Donkey Kong Junior version will. Basically a poor man’s Captain Crunch, it’s no wonder these didn’t grace too many pantry shelves. 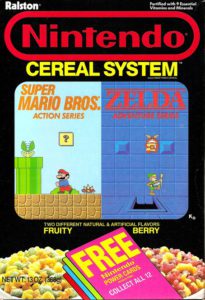 This is worth a look just for the box alone. If Nintendo were to release this exact same product in 2018 it would need a license to print money. 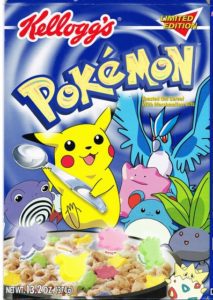 This entry proves again, the easiest way to add video game characters to the bowl is them out of marshmallows. Here you can catch your favorite Pokemon with a spoon, no Pokeball needed. 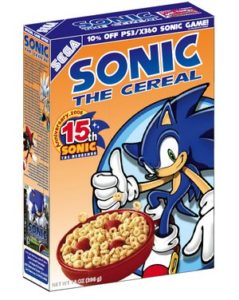 Do you like Cheerios? Would you like them more if they were named after Sonic? Well, you’re in luck!

What are your favorite video game breakfast cereals? Will you be getting the Super Mario™ Cereal when it releases on December 11th? Comment on Twitter @TravisVertuca and stay tuned to the GWW for more video game (and cereal) news.