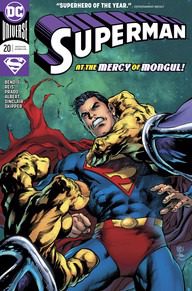 After the creative highs of exploring Superman’s reveal of his secret identity, Superman #19 was a mix of creative storytelling and standard fight scene. Bendis weaves these two distinct threads into a connected narrative in Superman #20 and prevents this from becoming just another Superman v. Mongul battle.

The Mongul battle provides a framing device for the alliance of United Planets, which creates the bigger story surprise of this issue. Bendis has set up the United Planets to feel similar to other interstellar story threads, but one leaked video of Superman saying that he speaks for the planet Earth gives reporters hunting for an angle a new twist and focus. Rather than focus on the familiar themes of collaboration and cooperation between planets and races, Bendis shifts the story arc as human begins to question why a Kryptonian represents Earth. This setup will allow Bendis to potentially explore themes of race and identity with the new public face of Clark Kent. The back and forth dialog at rival media outlet the Daily Star nicely depicts a journalist dilemma on Superman coverage. If Clark Kent is Superman, how can any media outlet match that coverage? It is an interesting glimpse into how regular humans continue to react to Superman’s reveal.

Have you seen this:
Dark Knights of Steel, Newburn and more: The GWW Pull List

The artwork by Reis, Prado, and Albert remains strong across the issue. Seven two page spreads are used to display the fight scene’s action, but also to portray the frantic debate among the journalist. This large layout works to provide a sense of weight and importance to the human side of the story. The intergalactic fight is drawn with energy and scale, and the layout allows the artists to highlight smaller moments in a fight where Superman struggles to hold his own.

Superman #20 leaps back from the lackluster issue #19 and sets up a new story angle where humans are questioning Superman’s role. The quick turn from praising Clark Kent’s bravery for coming forward as Superman could quickly be replaced with suspicion and judgment from humanity. The storytelling twist gives readers another reason to stick around to see how Bendis handles his characters in the face of this new challenge.