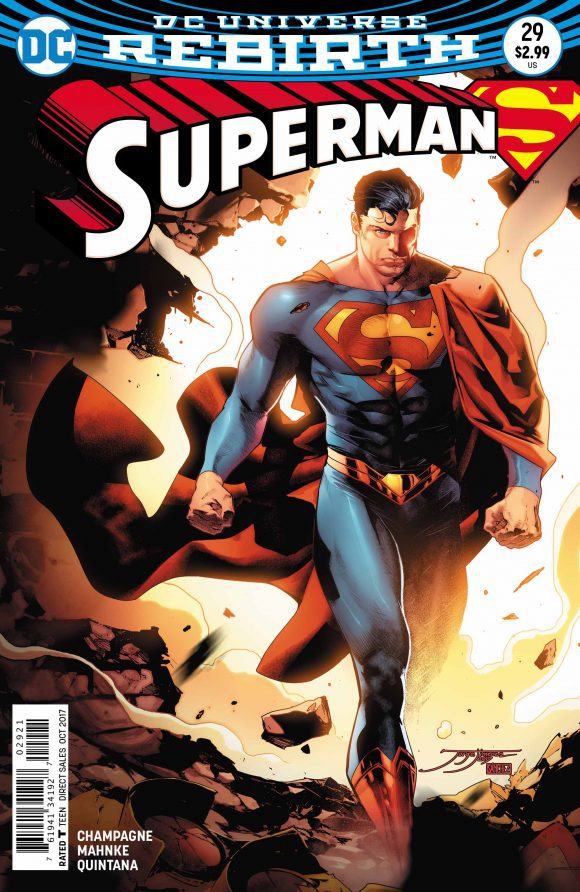 After the feel good road trip vacation in Superman #27 and #28, Superman is back in Metropolis in a story arc more connected to the larger DC universe. The summer vacation story line was valuable because it provided a way to for Clark bond with his family within the context of traditional American family dynamics. Over in the pages of Action Comics, Superman bonded with his family by trying to stop Zod. While Superman and the extended super family failed, Superman was confronted with the fear that he might lose his son. This family bonding and fear of loss is essential to the worry and fear that writer Keith Champagne interjects into Superman #29.

The fear of losing Jon is understandable for readers that witnessed Zod’s attack or Manchester Black’s abduction of Jon. But for other readers, the only context that Champagne provides is a single text about Superman worrying about Jon. The fear a new parent has for the safety of their child is real and can often feel 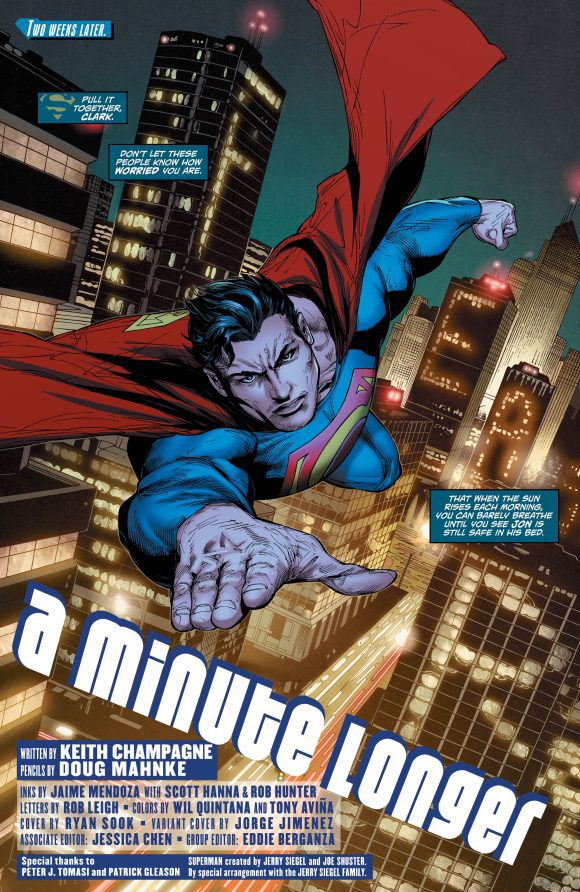 tangible for the parent. Clark and Lois are not new parents though. Superman was a parent during the Convergence events and at the end of the New 52. Yes, maybe the joining of the pre and post New 52 Supermen into a single person may have impacted his parenting, but none of this context is provided to the reader. Instead, readers are only told that Superman is worried and the city is gripped with fear.

A few additional text boxes or panels could have developed Clark’s concern as a parent based on all that has been happening recently. The result is that readers are left with a story that feels disconnected from the ongoing storyline. Superman as a concerned parent could have worked as a story at any point in the last year. The return of a key Green Lantern character is the only event that anchors this story in the timeline.

Even with the rushed setup for the story, Champagne tells an effective tale of Parallax feeding off of the fears of children and their parents. Doug Mahnke’s art effectively portrays Superman’s weariness and worry. Mahnke’s depictions of Parallax and the possessed children capture the creepy terror that drives Parrallax.

Mahnke’s excellent art does not save Champagne’s rushed story. This issue missed the opportunity to reflect the fear of being a parent in a world filled with super villains. Readers can hope that Superman’s fear for his son’s safety may return as a focus in the next issue.