“The Price You Pay” 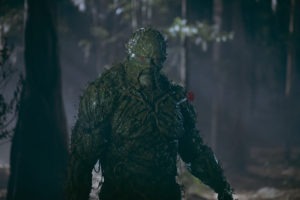 This installment of Swamp Thing has a lot going for it. Fans should enjoy the pacing, which effortlessly weaves together plot points and provides a pleasant amount of answers. With only four episodes left (including this one) and the show being cut down from 13 episodes to 10, I started to worry the cramming would begin. While there is a fair amount to digest, the storytelling remains smooth. 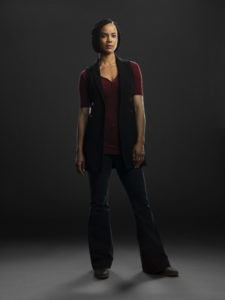 Overall the acting continues to be very good. There are some cracks in the armor that I’ll get to momentarily, but the majority of the cast has the ability to steal the show. Crystal Reed as Abby is an absolute star in the making, Kevin Durand turns the creepy up to eleven as Jason Woodrue, and Will Patton’s portrayal of Avery Sunderland is absolutely brilliant. Maria Sten’s performance as Liz Tremayne has been given room to grow, and the results are positive. Liz was a key character in the comics, and while this is a far different take, much like everything else, Sten has been highly entertaining. Speaking of which, Jennifer Beals is killing it as Lucilla Cable. She’s provided with depth and delivers each and every time. Standout material that I can’t get enough of.

That’s all well and good, but what’s wrong with this episode? The other shoe had to drop sometime, and I have some complaints. Let’s start with Blue Devil.

If you’re anything like me, you consider superhero fare on the CW mostly poor. Yeah, I’m spoiled. We all are. The genre has been dominating our screens steadily for over a decade. So a show that would have blown my mind before the boom, can’t quite stack up now. Not that I’m damning a product simply because it’s on network television. You see, slapping a cape on a daytime soap caliber product is the CW’s bread and butter. No offense to any of the actors on those programs, we all have to make a living. I just don’t have to watch it.

Ian Ziering thus far has been decent playing the cursed Dan Cassidy. Here, however, it felt as if I was thrust into one of those aforementioned CW cut-rate creations. I did like the involvement of the Phantom Stranger in flashbacks and the clue drops, but other than that…oh  boy, it was tough to watch. The visuals that are normally strong also looked better suited for a lower tier of television. There isn’t much time left before the show’s conclusion, hopefully they turn that story arc around.

We’ve finally reached the point in the review where we talk, well, about Swamp Thing. This is not a case of saving the best for last, but rather the least gets saved for later. I recently read a critique on social media where someone stated this Swamp Thing show shares similarities with the 90’s series because he’s firmly placed in the peripheral. I can’t argue with that, nor could anyone else, and it’s been an ongoing gripe of mine.

Much like a bait and switch, it feels like we are given crazy-good Swampy action to start the episode as compensation for his MIA status the remainder of the program. I’d be willing to guess and could be wrong as I didn’t actually time it, Swamp Thing is onscreen more here than ever before. He’s also used purposefully which is key, especially if he’s just going to stand around.  And guess what! Swampy lets out a mighty roar…again. Looks cool enough I suppose, yet I’m curious to know who decided that needed to be his signature move.

If you couldn’t tell by now, I have a love/hate relationship with this chapter. Some elements are so good that I can’t take my eyes off them, deserving high marks. But alas, the standard of quality on Swamp Thing had been set, and Blue Devil dragged down The Price You Pay.