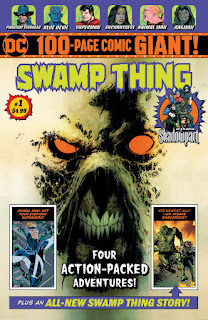 So what’s the hubbub about the Walmart 100 Page Giants from DC Comics? Well, if you spend a few minutes on Twitter you’re bound to find fairly mixed reactions. Some folks like myself appreciate the nod to the past. Namely, providing nostalgia nuzzlers a product similar to the Super Spectaculars of the 1970s. Affordable reprints to get superheroes into the hands of the masses. Detractors will say, and rightfully so, they are poorly displayed in stores and easily damaged hiding in the hobby/novelty sections young kids tend to frequent. One of the issues came under fire for the adult nature of its content considering children can easily pick it up and give it a gander. There’s also the fact international Walmart consumers are ignored. The specials are only available in the United States so, enjoy that nifty health care system Canada. We got comics!

I was truly excited to hear Swamp Thing got the green light for a Walmart ongoing. While there was a Halloween Horror Giant, he hasn’t had a solo book since the miniseries by Len Wein and Kelley Jones in 2016. Sure, the originals are only twelve pages long, but as anyone who has picked up a 100 Page Giant can attest to, they are a really nice package for the price. Plus, you can snag a copy while you’re out for milk and eggs.

As to avoid getting too far into the weeds here, I’m only giving my opinions on the original material and then the reprints as a whole. 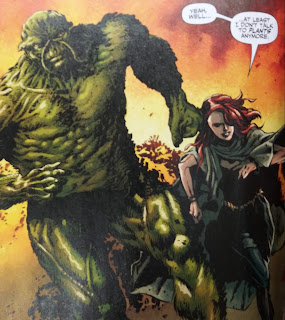 For those who’ve been following the muck-encrusted mockery of a man post Rebirth, you already know it’s been a mixed bag. There’s been the good, most notably in the current volume of  Justice League Dark and short stories featured in anthology titles. Then there’s the downright ugly, avoid Damage and the Terrifics at all cost. The characterization is just too damn loose. I’ve come to grips with continuity being dead and buried, but Swampy has been handled poorly. There’s just zero consistency from his motivation to back story.

Tim Seeley was the writer of one of the aforementioned good ones. He dabbled with Swampy during his Hellblazer run and wrote a fine little ditty called “The Spread” featured in Cursed Comics Cavalcade from October 2018. A seasoned pro and Swamp Thing fan, Seeley appears to be a natural choice to handle writing chores on this project.

Here, he pairs Swamp Thing with an interesting partner named Briar we met in the previous special. Briar’s a witch with a colorful past who has unique abilities perfectly suited for the partnership. She exhibits a snarky attitude that provides a nice dose of humor to the narrative as well.

The pacing exhibited in this short story is smooth. Readers are treated to a nice dose of action right off the bat, as the duo take on a villain referred to as ‘The Char Man”. A rather gruesome looking chap with an affinity for flames. What’s his deal? Let’s just say fans of elemental powers in Mark Millar’s run and Avatars from the New 52 are going to be very pleased. Was that a spoiler? If so, apologies. Go ahead and unread that.

All that being said, there were a couple head-scratchers that tied into some limitations Swamp Thing exhibited at the onset of the tale. All seemed to be resolved during the obligatory origin retelling, yet why was that the case at all?  Still, Seeley’s version looks to be in tune with what we see in Justice League Dark and pays tribute to Alan Moore’s vision of the character. Hopefully, clarity is around the corner.

The art was moody and dark. Mike Perkins handled a nice balance between fine lines and chaotic fervor. As someone not overly familiar with his work going in, any concerns I may have had were put to rest.

I’m intrigued. Not only does this tie into the Halloween Horror Giant but if my theories are correct, sets the table for some hefty stuff. The entire creative team did a nice job putting this bad boy together. While it’s only a small sample, it carried a big punch.

Now it’s time for the reprints. They are: Animal Man Vol. 2 #1,  Swamp Thing Vol. 5 #1, and  ShadowPact Vol. 1 #1. That’s all fine and dandy. I understand why DC included them and it’s pretty cool they intend to continue the same way sequentially in ish #2. My big beef is this, if you want to showcase some more Swamp Thing, the Snyder run is wasteful.

Admittedly, it’s pretty darn good and is full of homages to the past, but it’s fairly recent and there’s so much more material that could benefit from the spotlight. Sure, there’s a bunch of classics throughout Swamp Thing history that would easily fit the bill, but I have my mind on something in particular…

In the early nineties, Nancy Collins came on the title starting with Vol. 2 #110. Her run has never been given the trade treatment. It was a deep and profound take on Swamp Thing lore. Many of the themes she tackled then carry weight today. Those stories deserve an opportunity to be discovered by a new audience.

Want to read the works of Wein, Moore, Veitch, Brian K. Vaughan and so on? They are just a keystroke and “add to your cart” away. Collins, however, requires some serious bin diving if you’re interested in physical copies. There is one bubble of joy in the bayou as the Nancy Collins content is available on Comixology, but DC really dropped the ball here.

One last thing before I step off the soap box. It’s impossible to find the stats on these books, no print runs nor sales numbers. Tried dancing with Google and came away empty handed. I also attempted reaching out to a couple of people associated with this book for answers to no avail. Other publications are easily tracked and reported on monthly, yet the Walmart exclusives are shrouded in mystery. I hope to get more information on this soon. In the meantime, I’m keeping my fingers crossed the returns are healthy on the 100 Page Giants.

Despite dining on sour grapes to close out this column, I do highly recommend picking this up. An accessible comic at an affordable price point. Serious bang for your buck. Now drop what you’re doing and grab a mop. Clean up in aisle seven…I’m in love!

*All external links used for informational purposes only*