To bring up Swamp Thing in conversation is sure to dust off memories of the 1982 Wes Craven film,  the comedy tinted, pseudo-sequel  Return of  Swamp Thing, or the short-lived (yet episode packed) series that ran on the USA Network from 1990-1993. Many folks cite these works as their definitive recall of the character, while not all bad, can definitely be considered not fully loyal to the comic book canon. Originally created by Len Wein and Bernie Wrightson back in 1971, Swamp Thing has had many notable, even classic tales told since then. Alan Moore’s legendary run from the mid 1980s has become required reading among fans.

Within the realm of film and television, a whole generation has grown up without any live-action Swamp Thing in their lives over the last 26 years. During that time, our opinions about how we view adaptations in superhero media has changed. Well, for most of us, as a quick scroll through Twitter could prove me wrong.

The emphasis for the audience has evolved into caring less about continuity carried out in the comics and concentrating more on good storytelling. We currently live in a golden age, where our favorite capes and creatures delight us in various forms of media on the regular. If you blink, you’ll miss a new release based on a property that originally came from the pages of a comic book. This was far from the norm when Swamp Thing had his limited time in the limelight and the hardcore fan base, if they haven’t already, needs to adjust their mindset accordingly prior to watching the pilot for Swamp Thing debuting on DC Universe, May 31st. 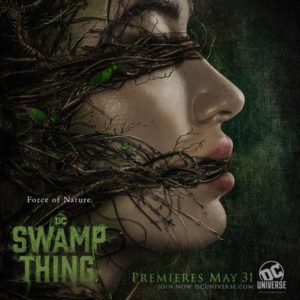 The pilot does a fine job establishing the core of characters that will lead us through the series. They are weaved in seamlessly over the first 59 minutes of the show and each introduction feels natural. The star that shines brightest isn’t the titular monster, but rather Abby Arcane. Played by actress Crystal Reed, Abby is a member of the CDC’s Epidemic Intelligence Service who has been called home to Marais, Louisiana where a potential outbreak is threatening the lives of the locals. Unlike the source material, Abby’s depth is established quickly, thanks to good writing and Reed’s excellent acting performance.

She soon meets the somewhat awkward biologist (and big on 80’s television references) Alec Holland, played by Andy Bean. He’s also investigating the epidemic, albeit from an unofficial channel. Alec and Abby pair up to put the pieces of the puzzle together and share a fair amount of chemistry onscreen. Most notably, when mutual confessions reveal more layers to their backstories for the series to explore over the course of the next nine episodes.

Another powerful first appearance is that of Avery Sunderland, portrayed by Will Patton. A wealthy businessman from Marais, who surprisingly, is one of the only actors to utilize a southern accent.  His introductory scene carries weight, not only proving he is a calming voice for the townsfolk, but also a major player in all of the secrets to unfold in the swamp.  Also worth noting, as told by his wife Maria (Virginia Madsen), the history Abby shares with the Sunderland family is quite substantial. 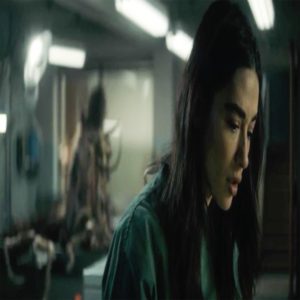 Executive producer James Wan has promised the series will be horror heavy. This episode wastes no time solidifying the fact, establishing the mood of the show from the opening sequence. With the right mix of suspense, action, and gore, they are as taking full advantage of the R rating. Those who appreciate the genre will notice the care put into giving Swamp Thing a truly spooky turn on television.  Exhibiting a hearty blend of practical and computer-generated visual effects, viewers will be terrified of the evil brewing in the bayou.

Composer Brian Tyler is a big contributor to the scares with his thick and haunting sounds. The music is the perfect accompaniment to the ambiance of the show and helps to set up the suspense for key scenes.  It’s easy to find yourself lost in the moment, due to the table setting provided by Tyler’s dark, melodic tones.

Not to say this episode doesn’t bear some blemishes. There’s a cringe-worthy moment that I interpreted as an attempt at flirting involving Google speak, and I considered Andy Bean’s performance as Alec to be a little dry. While not bad, there were times I felt when given emotional cues within the script, he lacked punch. This could be due to his co-star Crystal Reed stealing the show with the same opportunities.

Also keep in mind, this is an origin story. For those who are eager to see the big green guy onscreen, temper those expectations. You will get your wish in dramatic fashion. So in the meantime, enjoy the other bumps in the night provided over the course of the Swamp Thing pilot.

As I noted during my introduction, this is a modern reinterpretation of Swamp Thing geared to attract a new audience. As a fan myself, reading anything Swamp Thing related to cross my path over the last 30 years, it’s hard to dismiss the adage “If it ain’t broke, don’t fix it”; Yet if you measure the show on its own merits there’s a lot to like. I’m very excited to see how the newest chapter in the Swamp Thing mythos unfolds. DC Universe has a potential winner here.